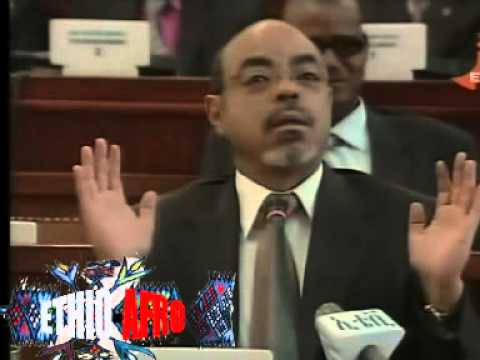 Finally the EU representative in EThiopia admits that “We have not witnessed anything like this in Ethiopia before” refering to the Dedesa concentration camp where the Fascist Meles regime is holding thousands of Ethiopian youth. The crimes of Bosnia and Rwanda are being repeated in Ethiopia. We cry out to the world to be truthful and condemn this man and withold the money. There are more than 120 embassies and consulates in Addis Ababa. We plead to them to hear the cry of a frightful genocide and atrocity being committed at this very hour and minute in early December of 2005!!!!! The US EMbassy is silent! Bush refused to meet our men and women in Waco last week! Blair is quiet…..What does it take to get the attention of our fellow human beings?????? Mr. Clinton said ‘never again this will happen’ after the Rwanda Massacre……The Europeans said ‘never again’ after Bosnia. But as thus is happening now in Ethiopia, why are they quiet? It is goling to be too late in few weeks…

Ethiopia is in danger of losing millions of pounds of foreign aid as disturbing new evidence of violence and mass detentions emerges from the country that until recently was being hailed as the great democratic hope of Africa.
International donors are deeply concerned about the political chaos in a country whose prime minister, Meles Zenawi, was supposed to be setting an example of good governance.

Five months after Ethiopia descended into political chaos following a dispute over the country’s first democratic elections, details are emerging that give a disturbing glimpse into the scale of human rights abuses taking place.

One man who had endured 19 days of almost constant beatings at the hands of Ethiopia’s security forces is Dereje. ‘The federal police beat us with batons and big sticks,’ he said. ‘A man was shot in his leg, but he got no medication. People lost their eyes and had their feet smashed. Many people were suffering there.’

He was referring to Dedesa camp, a former military base, in the far west of Ethiopia, where thousands of detainees have been dumped in recent weeks as part of a massive and unprecedented crackdown by Ethiopian security forces.

Few are prepared to talk but Dereje agreed to do so. He was picked up by federal police in Addis Ababa in early November, but is not sure why, as he has no links to any political party or protests. He was stuffed inside a truck with 150 other men and wedged under a pile of mattresses. Three men suffocated to death on the way to the camp.

Once there, he says, several men, weakened by hunger and malaria, were beaten mercilessly by the guards even as they urinated.

He says he knew of at least 30 who died, their bodies taken away to an unknown location for burial. He discovered from overhearing conversations between two police guards that there were at least 43,000 detainees in the camp.

Meles Zenawi has been lauded as an exemplar of good governance by Tony Blair who picked him to draft his Commission for Africa report on how to reduce poverty and promote democracy in Africa. But Zenawi now stands accused of undermining the democratic ideals he is supposed to promote.

‘I think it’s really disturbing,’ said Tim Clark, the head of the EU delegation in Addis Ababa. ‘The trouble is there has been a complete blackout on information.’

This emerging picture of large-scale human rights abuses coincided last week with an announcement that the police had completed their investigation into post-election disturbances during June and November in which at least 88 people were killed by security forces.

This followed parliamentary elections in May when millions of voters in Ethiopia voted for opposition candidates. So when the Meles government announced it had won the majority of 547 parliament seats, many critics claimed voter fraud.

In court last week, 23 political detainees, including the leaders of the Coalition for Unity and Democracy, were refused bail. They are expected to be charged soon with treason, which carries the death penalty.

Embarrassed by what it has called ‘disproportionate’ use of force by Ethiopian police, Britain is withholding some £20 million in aid. While the British ambassador declined to be interviewed Clark, himself a Briton, was unusually frank.

The EU has aid projects in Ethiopia that are worth more than €1 billion and Clark warned that those projects were under review subject to the government’s response.

Clark said: “We’ve been hearing from Dedesa camp about atrocities taking place. It’s extremely worrying. We have not witnessed anything like this in Ethiopia before.’

At the Prime Minister’s residence heavily armed special force soldiers man the gates, and there is a palpable sense of nervousness.

Meles Zenawi told The Observer that demonstrations following the elections had not been peaceful, and accused the opposition of plotting insurrection long before the elections were held.

He said: ‘It was an uprising and we put down an uprising. Regrettably it involved loss of life, but it was not a peaceful demonstration at all.’

He said opposition leaders had been instrumental in fomenting riots, during which hand grenades were thrown, and that the government would soon present evidence to back its claims. He said the donor countries’ demands to see opposition leaders in prison had been rejected because they were presented in an ‘insulting manner’.

He has spoken to British development minister Hilary Benn and admitted the British government had expressed concern. But he insisted that there would be an open, independent investigation into the disturbances which he claimed had left seven policemen dead.

He claimed only two or three people, already ill, had died on route to Dedesa camp and insisted there are only 6,000 being held there and promised to investigate any claim of abuses. He said: ‘I’ve always been convinced that democratisation in Ethiopia is not only a matter of choice but of survival. We shall persist with our democratic reforms, no matter the challenges we will face along the way.’

He said The Observer would be allowed inside Dedesa. This did not happen, but a supervised visit to opposition leaders in jail was allowed.

Four leaders were arrested on 1 November and this was the first time Hailu Shawel, the CUD leader, had been able to speak publicly since his detention. He condemned the international community for not taking tougher action.

He said: ‘Of course they pay lip service to democracy. But after all these people have died, their response has no place at the moment. It is not proportionate to what is happening. It shocks me when they say 40 to 50,000 youths in Addis have been herded away. This is unheard of. What’s the purpose of this?