We, US citizens and permanent residents of Ethiopian descent representing the civil organizations listed hereunder, are deeply concerned about the press statements the Department of State has been issuing regarding the unfolding situation in Ethiopia. As you are no doubt aware, policy pronouncements originating from your office have significant reverberations, implications and consequences even in the remotest corners of the world especially in countries, like Ethiopia, which are in the grip of crises.

The latest Readout from the Office of the Department’s Spokesperson, Mr Ned Price, regarding your telephone call to Prime Minister Abiy calls for, inter alia, the “complete withdrawal of Eritrean and Amhara forces from Tigray” and “an affirmation that neither the internal nor external borders of Ethiopia will be changed by force or in contravention of the constitution.”

We support your call for the opening of humanitarian access to populations in need of food assistance and the establishment of a process to bring those who might have committed human rights violations to account.

We do take a strong exception, however, to your call for the withdrawal of Amhara forces from the region comprising of Welkait, Tegede, Telemt and Raya, all territories which you incorrectly seem to regard as being part of Tigray. It is regrettable that the statement takes as a fact the blatant lie that the Tigray People’s Liberation Front (“TPLF”) has been peddling for several decades. Calling for the withdrawal of Amhara forces from the region inappropriately puts the US in a position of putting its thumb on the scale and giving credence and recognition to TPLF’s rewriting of the history and demographic of the region as well as that of historical Tigray. Taking sides without closely examining the history, geography, culture, physiological makeup and wishes of the local population is not only unfair and unjustified but also unhelpful as it tends to inflame – rather than to reduce – passions among the affected population.

To those who are familiar with Ethiopian history, there is no question but that the region has never been part of historical Tigray before its forcible annexation to that state by the TPLF in 1991 when it assumed state power in Ethiopia. It is worth noting that this was done even before the Stalinist constitution which the TPLF imposed on the Ethiopian people was proclaimed in 1995. Even a cursory review of the historical record is quite clear and reveals that the first three of the areas mentioned above were sub-districts of the erstwhile Province of Begemeder (otherwise known as Gondar) while the fourth was part of the Province of Wollo (maps showing the administrative regions before and after 1991 are attached for your reference.) The inhabitants of these regions are predominantly Amhara and have repeatedly petitioned the Ethiopian House of the Federation to restore the status quo of the region as it existed prior to 1991. These petitions, however, could not go anywhere because the TPLF, being in full control of the central government, was able to stifle or otherwise block any form of redress.

Given this history and the evident desire of the local population to gain freedom from the clutches of the TPLF, the notion that the “internal borders” created ex cathedra by the TPLF should not be changed by “force or in contravention of the constitution” shocks the conscience. For it validates administrative borders created by force and perpetuates the denial of the fundamental rights of the natives of the region to practice their culture, to speak and write in their own language, and to govern themselves. For close to three decades they have been ruled by the TPLF as second class citizens and have never been given the opportunity to determine freely the state with which to associate themselves. It is also worth noting in this connection that, as a matter of fact, the entire Amhara community did neither participate nor was it represented at all in the process of making the current constitution – a constitution which has served as an instrument of their oppression as well as a prolific source of ethnic conflict and state instability as well.

It is important to recognize in addition that the internal borders of the country are just that: internal and not international boundaries that must be viewed as sacrosanct. Besides, nowhere does the constitution define or delimit the internal boundaries of the federal units beyond merely listing their names. Although it envisages the delimitation of states on the basis of “settlement patterns, language, identity and consent of the people,” the identity and consent of the affected population were never considered when state borders were unilaterally drawn by the TPLF when it took control of the central government in 1991. Moreover, the unstated but implicit assumption behind the notion of permanent internal borders grossly misrepresents Ethiopia’s historical evolution as a state. The Ethiopian state did not develop as a confederation of pre-existing and distinct entities with their own sacrosanct and inviolable borders like the internal borders of the former Yugoslavia, Czcekoslovakia or the Soviet Union.

We are disappointed that the US Government has chosen to put unfair and undue pressure on the Ethiopian Government to keep the above-mentioned sub-districts as part of Tigray’s dominion notwithstanding the historical record, the geography of the districts involved as well as the identity and consent of the inhabitants thereof.

We are not unmindful of the national interests of the US in Ethiopia and its apparent intention to leverage the TPLF’s return to power. We would like, however, to stress that Ethiopia’s stability and the stability of the Horn of Africa in general is fraught with difficulties were that to be the case. The vast majority of Ethiopians have roundly rejected TPLF’s rule and want the US to leave Ethiopia alone to handle its internal affairs.

It would be like carrying coal to Newcastle to remind the US Government of its duty to refrain from intervening in matters within the domestic jurisdiction of another state. As unambiguously articulated in the Declaration of Principles of International Law Governing Friendly Relations and Co-operation Among States in Accordance with the Charter of the United Nations, “[n]o state or group of states has the right to intervene, directly or indirectly, for any reason whatever, in the internal or external affairs of any other state.” Given this clear injunction, the US call is highly intrusive, unusual, unlawful and, therefore, unacceptable.

On the other hand, we welcome and fully share the concern expressed in the Readout calling for the “establishment of a process to hold accountable those responsible for human rights abuses.” We fully agree that neither the state nor its officials at any level should be allowed to act with impunity and avoid accountability as was the pattern during the TPLF’s reign.

We are compelled to wonder, however, why the US Government remained largely silent when many Ethiopians of Somali, Gambella and Amhara descent were butchered by the TPLF during its reign of terror for27 years. Why didn’t the US voice any public concern when about a thousand Amharas were massacred by the TPLF in Mai-Kadra (Welkait) even as recently as November 2020? The perpetrators of the massacres who fled to the Sudan have since settled as refugees and are currently receiving military training there with the expressed intention of returning to the country to resume their anti-Amhara campaign of terror.

Mai-Kadra is only the latest of the atrocities against Amharas since the TPLF singled out the Amhara ethnic group as its sworn enemy from the day that it was founded as a “liberation” movement back in 1976. The initial victims of mass atrocities were the people of Welkait, Tegede and Telemt beginning in 1977. The TPLF then presided over a government that saw many mass atrocities against Amharas over the years in various regions of the country including Harar, Wellega, Arussi and Gura Ferda. These atrocities have continued unabated even today as we write these lines. In 2021 alone, hundreds of innocent Amharas have been massacred and buried in mass graves in Beni-Shangul-Gumuz while thousands more have been killed and/ or internally displaced in Wellega, Ataye and other places in the south of the country.

Yet, the news of these mass atrocities has received no mention, let alone condemnation, by Western governments or media. Which leads us to wonder whether human rights violations in the West are judged under a double standard and on a selective basis: one standard for those, like the TPLF, who have powerful friends in the highest offices of Western governments and another for those, like other Ethiopians, who have no such allies.

The relations between the US and Ethiopia are more than a century old and have largely been marked by friendship and cooperation. But the recent turn of events does not seem to augur well for continued friendly relations especially in light of the United States’ recent actions and pronouncements which seem to call into question Ethiopia’s sovereignty.

We hope that the relationship between the two countries would overcome the current challenges and be restored to its former status. Accordingly, we wish to urge the US Government to study carefully and closely the facts on the ground and the historical record in a dispassionate and objective manner in formulating its policy toward Ethiopia including the question of its internal borders. Ethiopia is home to one of the oldest civilizations in the world and, as such, its people are jealous of their national sovereignty. After all, sovereignty means little if a country lacks the power to determine its affairs without the interference of other nations. Most Ethio-Americans voted for Mr Biden in the hopes that he would avoid an interventionist policy that in the past has been the bane of African nations or any nation in the world. Support Ethiopia, The Biden administration must reject ethnic divide and rule the TPLF imposed on Ethiopia without any procrastination and openly declare full support to the legitimately elected Government in Ethiopia.

Please accept the assurances of our highest consideration.

Appendix I: Administrative Regions of Ethiopia prior to1991 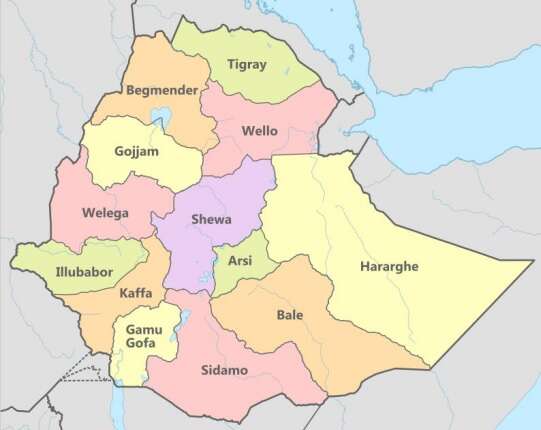 Appendix 2; Administrative Regions of Ethiopia after TPLF came to power (1991). 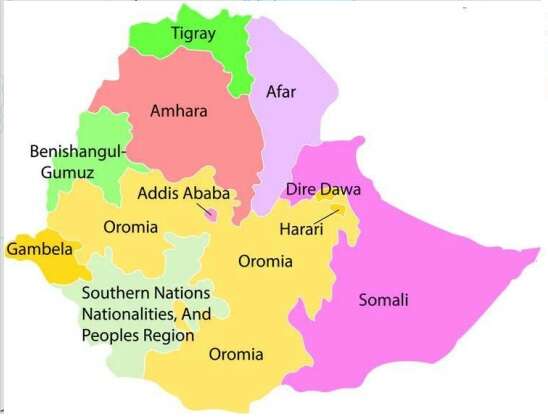