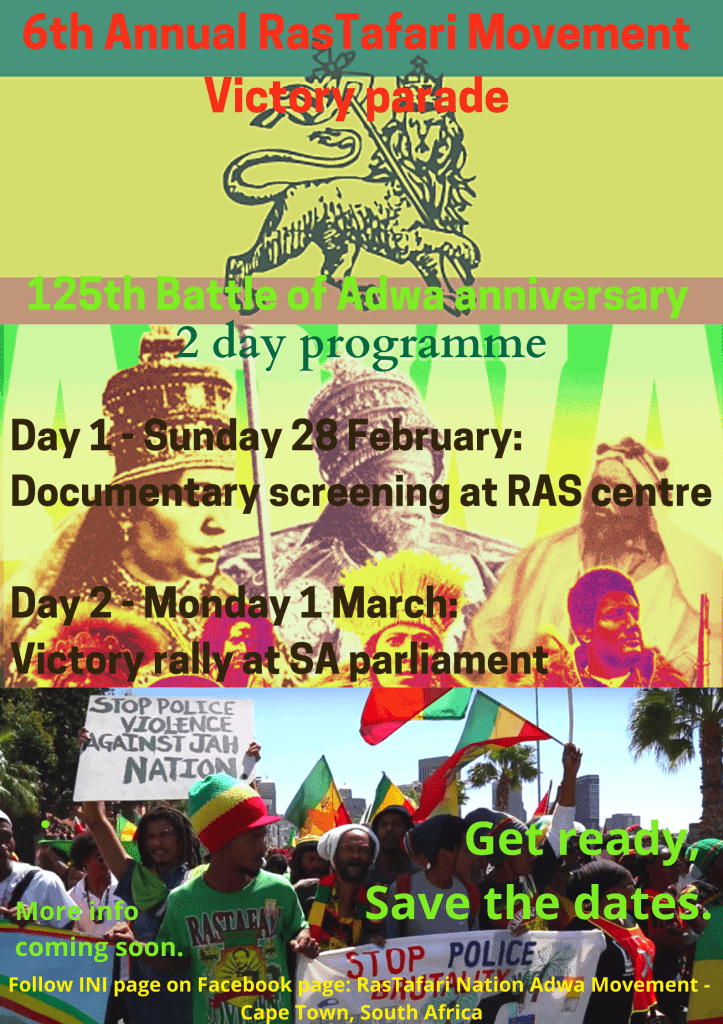 The participants were representative of all various mansions, houses, collectives, groups, communities and organisations constituting the RasTafari Movement of Azania (South Africa).

The fundamental purpose of the event is to celebrate the Victory at the Battle of Adwa, the Movement also uses the march as a platform to deliver a memorandum of demands, from the RasTafari communities of South Africa, to the current Government.

The NNC-RNC-RUF Leaders were present, this alliance represents the Supreme Council of RasTafari in Azania. RNC Secretary-General Elder Noel Melville and NNC Chairman Kebra Igust Igust was present with the other leaders mentioned in this debrief.

The InI was arriving on Menelik Square by 3 AM. RasTafari communities from Paarl, Strand, Garvey, Worcester, Houtbay, George, Oudtshoorn, Stellenbosch, The Cape Flats in general, to mention the geographic diversity and communities of the InI in attendance.
Guest speakers that attended the march included Gareth Prince, Prof. Mammo Muchie and Elder JJ Zebulon of the Voice of the Western Province (VOWP). Prof. Muchie came to Cape Town specifically to assist and support the Adwa Victory celebrations, he delivered a lecture at UWC on 29 February and made an address at the public celebration on 2 March. Elder Priest Afa Negus opened the day’s proceedings with Psalms, Prayers and a message from the Throne Room.

Ras Gareth Prince handed the memorandum to the Government representative from the office of the Presidency at Parliament.

Back on Menelik Square the closing Prayer was done by Elder Afa Negus. The stage-show from 3 PM till 5 PM powered by Triple Crown Sound System was a great way of sealing up the march. Thanks unto Jo Baka, Anela Jahmena, Siphosethu Dyonasi, Ras Jud, Judge Supreme, Chanell Baatjies, Jahkongo Mazembe, Niko10Long, Mrgriep Brimestone and all other artists that volunteered their craft and art for the Adwa Victory Celebration.

Ancients and elders, mothers and fathers, sons and daughters, youths and fruits. Progressive RasTafari forces, warriors on the front-lines, who never leave the battlefield till the Victory is won. One God One Aim One Destiny.

This is a non-profit platform, we give thanks unto the sponsors of logistics, communications and sound-system.
The selfless sacrifices, energy, time and efforts made by all to advance Jah Works.

Special thanks unto Elder Brent Roberts of Triple Crown SA for the support provided to the annual march since inception in 2015.

Through Jah Powers InI shall return to Menelik Square in 2021 for the 6th annual march ilabrating the 125th Anniversary of the Victory at Battle of Adwa.

Repatriation is a Must.