Is Ugandan President Yoweri Museveni a “Trojan Horse” for Egypt? 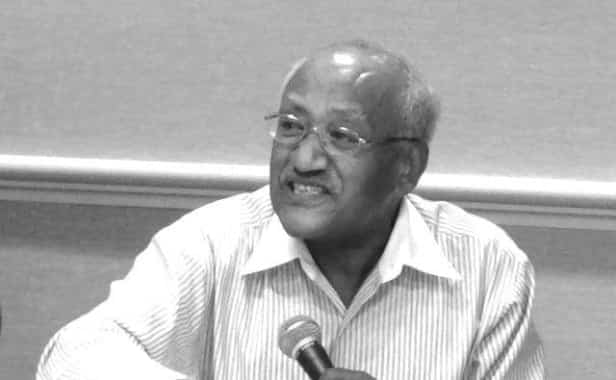 I follow the passionate discussion on the #GERD with interest. But the fundamental truth is – a country which does not contribute one drop of water to the Nile (#Egypt) – cannot demand 100% of the right to decide how the waters should be used by all. The world has changed.”

In Part One of this series, I provided evidence and argued passionately that Egypt mobilizes, finances or persuades and deploys a network of domestic Ethiopian opposition groups, establishes and cultivates reliable regional alliances and leverages its substantial weight and influence in the Middle East and pressures the West led and dominated by the USA to be on its side.

On July 29, 2022, Egypt submitted a stern letter to the UN Security Council “rejecting Ethiopia’s unilateral continuation in filling the Grand Ethiopian Renaissance Dam (GERD)” unless Ethiopia agrees to a “binding agreement with Egypt and Sudan on the filling, operation and management of the dam.” Egypt argues the third filling is a “violation of the 2015 Declaration of Principles (DOP) and a serious violation of the applicable rules of international law which oblige Ethiopia as an upstream riparian country not to harm the rights of downstream countries.”

International experts and the government of Ethiopia provide technical and scientific evidence that the GERD will cause “no significant harm to Egypt of Sudan.” In fact, the benefits to both countries outweigh the risks.

Egypt’s primary target is hegemony over the Nile River. As shown in the map on page three, the Nile River flows north for 4,132 miles and empties in the Mediterranean Sea after quenching Egypt’s insatiable stretch of desert lands. Ethiopia’s Blue Nile and other Ethiopian tributaries supply more than 86 percent of Nile waters. Egypt does not contribute a drop of water.

In his book, “Concrete Revolution” and in a chapter entitled “Ethiopia, the Bureau, and Investigations of the Blue Nile, Christopher Sneddon quotes an Ethiopian official representing Emperor Haile Selassie in the last days of his rule in 1974. “I remember that in the twinkling of an eye the following slogan appeared in the streets of the capital Addis Ababa.” The slogan he was referring to is the construction and completion of dams in Ethiopia. “As soon as the work on the dams are done, wealth will accrue to everyone!  Let the slanderers spew their lies and shams— They will suffer in hell for opposing our dams!” Unfortunately, this did not happen.

The point here is the role played by the US Bureau of Reclamation in support of Ethiopia that the author underscores. “Along with the Litani River initiative, the Bureau’s other major international effort of the 1950s was the Blue Nile investigation in Ethiopia. The Bureau’s role in Ethiopia’s water resource development strategies stretched over a two-decade period from 1951 to the late 1960s.” He continued. “While some of the development focus fell on the Awash River basin, the Bureau’s primary activities centered on irrigation and hydropower projects in the headwaters of the Blue Nile. The Blue Nile program was critical for both institutional and political reasons. It helped to revive the Bureau’s international program as it came under threat due to disinterest within the Bureau and lack of funding from Washington. And like the Litani program, it became deeply embroiled in both the national politics of development within the host country and broader geopolitical machinations centered on proposed cooperative development of a transnational basin. Despite these parallels, the Blue Nile initiative was unique. The potential development of the Blue Nile, which forms the headwaters of a prominent international basin was used by both the Ethiopian and American states as a lever of influence over downstream states, particularly Egypt.”

Frustrated by the partisanship of lending institutions in favor of Egypt, Emperor Haile Selassie advised the Ethiopian people that “they should treasure and guard the studies and project designs on the Blue Nile.” He predicted rightly that, someday, future generations of Ethiopians will possess the technical and financial means to construct the dams.”

The Grand Ethiopian Renaissance Dam (GERD) traces its roots to the massive study and project design financed by the United States, at the time a close friend and strategic ally of Ethiopia.

During the height of the Cold War, the United States gave Ethiopia a special and distinguished status. Ethiopians fought in the Korean Peninsula side by side with Americans. Ethiopia’s importance is embedded in its long and distinguished history as an ancient country as well as in its strategic space. Ethiopia has always been an independent country and a model for the rest of Africa. It sits on one of the most geopolitically strategic locations in the world, adjacent to the Red Sea and not too far from the Indian Ocean. It is one of the origins of humankind. It possesses enormous mineral and other natural resources.

More relevant to this commentary, Ethiopia’s water resources, especially transboundary rivers such as the Blue Nile enhance its attractiveness. America’s estimation then was that Ethiopia showed immense potential for rapid development.

Water is life/life is water

Hydro politics led by Egypt, tensions between Israel and the Arab World, the rapid rise of China as a strategic competitor to the West in general and the USA in particular, the emergence of African nations from the debilitating impacts caused by the slave trade, colonialism, neocolonialism and new competitors for Africa’s huge natural resources and increase the new Cold War have changed relations dramatically.

Today, the EU and the USA favor Egypt over Ethiopia. China and Russia feature prominently in the new Cold War. Russia’s foreign minister visited Ethiopia and announced cancellation of more than $160 million of Russian debt to Ethiopia.

For example, in 2021/2022, Egypt, the TPLF, the EU and the USA called for and discussed Ethiopia at special sessions of the UN Security Council thirteen times. Egypt just lodged a new request for a special session on the GERD.

In the past, China and Russia and non-Permanent members of the UNSC rejected allegations made against Ethiopia. I believe the same will happen in the future.

Egypt and Sudan continue to insist that the GERD is a national security matter for Egypt. They insist the UN Security Council must address it as a security issue that may lead to war. The Nile River is this critical for Egypt.

The map on page 4 shows that the White Nile adjacent to Jinja, Lake Victoria in Uganda, stretches north and feeds the mighty Nile; while the Blue Nile which carries more than 86 percent of Nile Waters moves north-West and feeds this river with more than waters. It carries huge quantities of valuable soils, woods and other natural resources that enrich the river and make it a strategic asset for downstream nations, Egypt, and Sudan.

It is therefore not surprising to me that Egypt which relies solely on the Blue Nile is deeply concerned and argues that any decrease in the volume of Nile waters from the GERD and future GERDs pose a national security threat.

My counter argument is that Ethiopia more so than Egypt possesses fewer alternative options. It does not possess aquifers; Egypt does. Ethiopia does not have access to the seas; Egypt does.

Human development indices that I shall summarize later show that Egyptians are better off utilizing the Nile River compared to Ethiopians who supply waters to Egyptians cost-free.

Egypt wants to deny Ethiopians the human right to use their own waters and improve their lives and livelihoods without causing significant harm to Egyptians or Sudanese.

Ethiopia’s low-level human development index is in part due to continuous and deliberate efforts by Egypt and its strategic allies to weaken, destabilize, fragment and impoverish it. Egypt cause pains to Ethiopia through proxy wars. Statistics tell the stark contrasts between Egypt and Ethiopia.

Egypt’s Ministry of Agriculture reported that in 2021, Egypt’s agricultural exports amounted to about “5.2 million tons recording an increase of about six hundred tons from the same period last year.

Egypt produces wheat and rice primarily for domestic consumption. In 2021, Ethiopia imported 300,000 tons of wheat, some of it from Egypt.

Ethiopia is the largest wheat importing country in Africa. 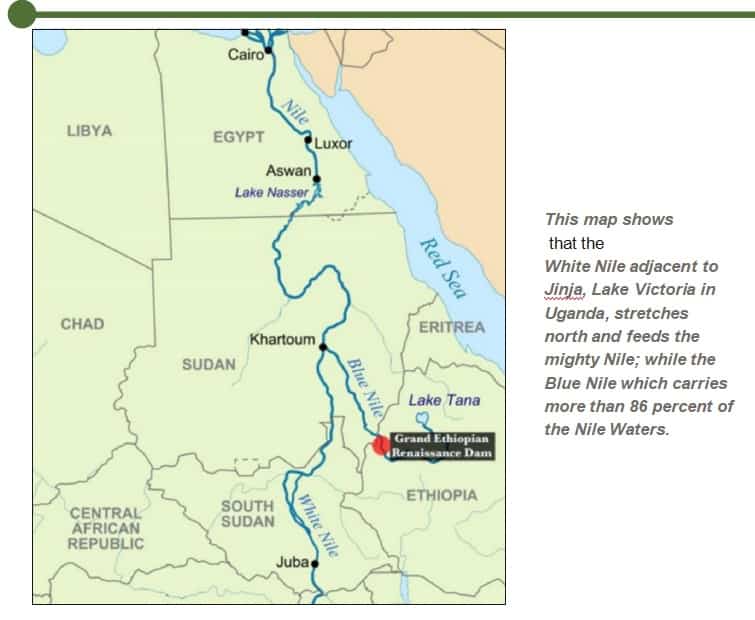 Ethiopia’s dependency on imports of wheat may be history in the not-too-distant future. The reason for the dramatic anticipated change is irrigated farming primarily in the Oromia region of Ethiopia.

Replication of the irrigated farming model in other regions with potential will go a long way in making Ethiopia food self-sufficient. Irrigated farming will also generate huge employment opportunities for Ethiopia’s youth.

In IFPRI Discussion Paper 00700, “Integrated Management of the Blue Nile Basin in Ethiopia Hydropower and Irrigation Modeling” authored in May 2007, leading American experts on the subject concluded that “Ethiopia is at a critical crossroads with a large and increasing population, a depressed national economy, insufficient agricultural production, and a low number of developed energy sources. The upper Blue Nile basin harbors considerable untapped potential for irrigation and hydropower development and expansion.

Numerous hydrologic models have been developed to assess hydropower and agricultural irrigation potential within the basin, yet often fail to address critical aspects, including the transient stages of large-scale reservoirs, relevant flow retention policies and associated downstream ramifications, and the implications of stochastic modelling of variable climate and climate change.”

The paper concludes that “The commencement of water resources planning and strategizing with downstream riparian countries is vital to the success of the hydropower and irrigation development projects. There are many opportunities for win-win situations, with bargaining chips including energy and food production, regulated streamflow, water conservation through reduced evaporation losses, and redistributed water rights through a renegotiation of the 1959 Agreement, to name a few.”

To summarize Part Two, the Nile Basin Initiative (NBI) that Ethiopia supports, and Egypt rejects could still serve as a platform and as an African institutional mechanism that will help all 11 Nile River riparian nations to discuss and arrive at a durable and sustainable solution.

The UN system must recognize that Nile River is a shared and renewable transboundary resource. This negates Egypt’s sacrosanct position of historical and natural rights over the Nile.

The time has come for a Nile River water sharing Agreement. On their part, the international community, especially the US-led West, must cease and desist from taking sides on this vital African matter. Taking sides emboldens Egypt’s intransigence.

The colonial era is gone for good. Instead, the international community in general and the UN Security Council must leverage their weight and urge Egypt to negotiate for a win-win solution. Reverting to war as an option will have disastrous consequences for all concerned countries.

The first and most important confidence-building step for Egypt is to stop its proxy wars against Ethiopia.

Egypt must restrain its agencies and agents within Ethiopia, in the Horn and the entire Nile Basin.

Part Three will discuss the different tools and machinations Egypt deploys against Ethiopia and deter its legitimate efforts to complete the GERD within a reasonable period.