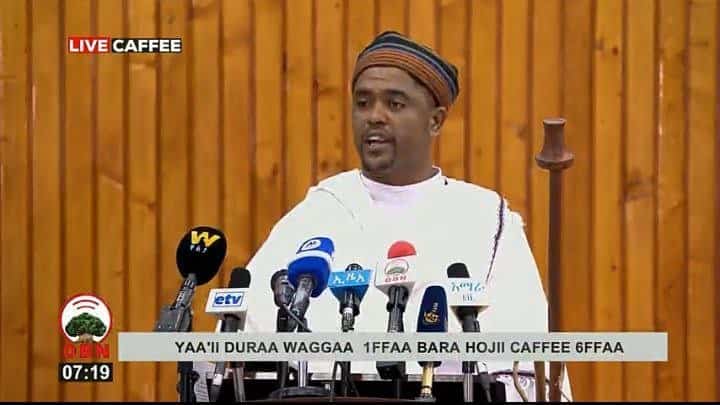 During the session, a new proclamation was approved by the vote of all the members of Caffee where thirty-four of the 49 bureaus organized in the region are to avoid overlapping of names, procedures and responsibilities. In addition a new regional militia force was established.  In the session, the former state transport office has been reduced to an agency. It was also decided to establish a new office for irrigation and pastoral issues.

Later in the afternoon, the First session of the 6th regional council today where it elected the new regional president, speaker and deputy speaker of Caffee.

Elected members of 6th Caffee were sworn in by incumbent President of the Oromia Supreme Court Ghazali Abbaasimal and elected Sa’ada Abdulrahman as the new speaker of Caffee replacing Lomi Bado and Elias Umata as the deputy speaker replacing Mahbouba Adam. Both were sworn in by the President of Oromia Supreme Court Ghazali Abbaasimal.

The 6th regional council also reelected Shimles Abdisa as President of Oromia National Regional State. It is to be remembered that the ruling Prosperity party (PP) won all contested seats (513 out of 537) in Oromia regional council.