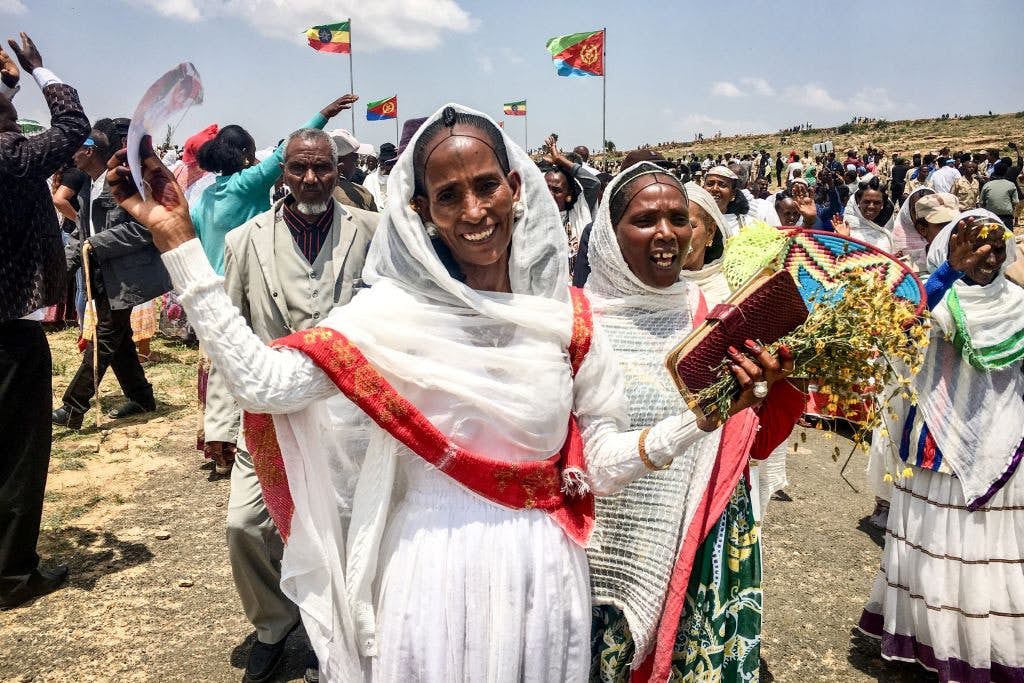 It is history now that the first half of the 1990s saw a remarkable change in the paradigm of relations between the newly independent state of Eritrea and the Federal Democratic Republic of Ethiopia. In the initial euphoria regarding these events that was unfolding in the horn politics, there was much talk and writings of the <end of the conflict history>, <a new age of peace>, <renaissance>, and <strategic alliances and cooperation>. But as event continued to unfold, if anything has happened, it was the return of the past history with a vengeance.

The same analogy was amplified in the bigger projection, by many politicians and political scientists, after the fall of the Berlin wall in all corners of the world, but if anything has happened it is not congruent to what was promised by the new world order following this event.

For many who had monitored and followed events and their contours prior to this tragic conflict between Ethiopia and Eritrea which started at the borders, there was nothing new that surfaced. The relations between two countries were not in relative peace during those early years of the 90s. Ethnic tensions and problems were mounting inside Ethiopia. Economic inequalities and marginalization of the Ethiopian disenfranchised population was increasing. Social injustices were becoming rampant. The political legitimacy of the regime in Ethiopia and its federal system was being openly used as an instrument to divide the population deeper on the basis of ethnic lines. Cross cutting issues like diverse range of actors with apparently irreconcilable differences over the protection and attainment of their material and political interests were increasing.

The preservation of the historical, ideological, political and cultural values of the “Tigrian” political leadership in Ethiopia and the fulfilment of the need for some form of recognized national identity at the expense of other ethno lingual groups in neighbouring nations were being manifested vividly in the contours of the new political map of the Horn: including but not excluding in the political and geographical borders of the two countries Ethiopia and Eritrea.

Therefore, it doesn’t take a rocket scientist to understand the undercurrent which leading to the border conflict between the two countries, which remarkably changed into full-fledged war in no time, was definitely a spill over and extreme manifestation of such and other embroiled problems brought forward from the past genesis of the Tigray Peoples Liberation Front (TPLF).

Surrounded and influenced by these and similar events, third party mediation in its raw Cold War form and content resurfaced once again to provide a resolution formula so that the conflict would not become an epicentre to other tangential and inherently usual problems of conflict of interest in the region.

There was a serious concern of many politicians and political scientists that this event could lead into dismemberment and division of Ethiopia on ethnic line. Internecine power rivalry in the political leadership of Ethiopia will follow. US, Russian, European regional security interests and relationships could be affected adversely. Thus, every effort was made to contain or deter the conflict quickly by facilitating mediation by proxy including putting an imposition of arms embargo to both countries.

The Ethiopian political leadership, which has been a beneficiary during the Cold War period in such kind of situations i.e. during the conflict of Ethiopia-Somalia in 1978, Ethiopia-Sudan in 1975 and Ethiopia-Eritrea in the thirty years war since 60s, seeking external military and political support, was quick to play the old tune and drums of war.

Many well-known political elements of opportunism and new recruits in the Horn of Africa, as well as in Eritrea and Ethiopia, joined and started playing the famous ‘eskestta’ music again. Terrorists newly harboured in the region started clapping in unisons.

Initial interventions, which came from all angles to provide facilitative environment to put a quick end to the border conflict, ended with no success.

Even though Ethiopia failed short of getting outright military support in its long-term objectives as it did during the Cold War, it succeeded in getting a substantial external material and financial support to pursue its objectives in this war to further its long held policy in the Horn of Africa.

In spite of this, and other related developments in the war fronts, the border conflict between Eritrea and Ethiopia entered its anti thesis and the demarcation of the political lines in the border were completed in 2002.

Yes, there was a general consensus and realization by all concerned elements that this conflict has sparked a political dilemma between the two countries, which will have a profound deep-rooted implication to the states, organizations, and citizens of both countries. Therefore, the complexity that this mediation has to endure, as a given factor, was obviously equally proportional to it.

Yes, it was also equally important at any stage to note that the mediation of this particular conflict is definitely going to become a very important example and chapter in the subject of conflict resolution for many local and international politicians, scientists and students for many years to come.

Yes, naturally, it did also become one of the favourite subjects of debates and disagreements too.

But, those series of interpersonal meetings and negotiations between the two governments, intergroup meetings between IGAD leaders, interventions of organization like the OAU and other regional organizations, inter-communal group meetings by citizens of both countries, and active participation of the UN and the Security Council and the level of intervention achieved can not be reversed; because, it was crowned by the political acceptance of both parties for a conduit and a decision to be made by a third party.

The role of this party was clearly defined in the Algiers Agreement of December 2000. In this Agreement, the two Parties have unequivocally agreed to hand over the determination of a binding and final settlement of this conflict to an outside mutually agreed authoritative body called the Eritrea – Ethiopia Border Commission (EEBC).

It was obvious from these framework of Agreements, signed by both, that the effectiveness of this mediation depended, not wether the decision was partial or impartial, but on the crucial issue of the implementation of the strategies and tactics by which the decision is to be deployed on the borders of the two countries by this Commission.

Therefore, it would be counter productive to shift away the achievements of this Commission by using instruments of coercive diplomacy, economic embargo, sanctions or facilitative problem solving mediums or any other mechanism of workshops of pressure at this level.

Academically speaking it is true that between any parties in a conflict the nature of mediation is dependent on a number of factors like the sources of the conflict, the history of trust or hostility between the parties, their predisposition to negotiate and compromise, and the nature and timing of the request or offer of any mediation.

But looking back into the background of this conflict, the avenue and widow of opportunity opened by this Commission is the only light in sight at the end of this treacherous and prolonged tunnel.

Therefore international community should play a constructive and conscious role to abort further catastrophic human tragedy in the Horn of Africa by putting its full backing to the decision of the Eritrea – Ethiopia Boundary Commission (EEBC) and support the natural evolution of peace process between the two states.

More than any time in the past, it is now that the parties to this Agreement should be shown how to put their hands were their mouth is and not where the alms or arms are because this is the only genuine solution to this conflict on the table that denies others from provoking or starting war under unlawful political pretext for their development in the Horn. Cold War policies must not blind UNSC. History will ask their judgments. Regional peace and stability is clearly at steak here. It must not be a way of life.