Samra Tesfaye is best known as a mother of singer, songwriter, and record producer The Weeknd, AKA Abel Makkonen Tesfaye.

She is a single woman and never married to date.

But she had a love relationship with a guy named Makkonen Tesfaye. The detail about him is unknown.

They have one child together. The couple separated when their son was too young. 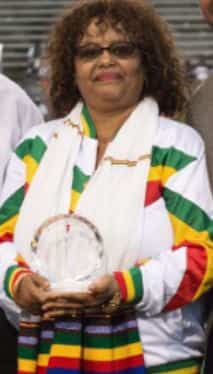 NEWS OF THE WEEK: Elon Musk buys Twitter for $44 billion

The reason behind their break up is still unknown.

After separation, she raised her son with the help of her mother.

Her then-boyfriend had no contribution to the upbringing of their child.

According to sources, her ex-boyfriend is a married man and happy with his wife and children.

Her Child, The Weeknd

The Weeknd is the only child of her. His real name is Abel Makkonen Tesfaye.

He came to prominence after releasing his mixtape, ‘House of Balloons.’

He was raised in his maternal grandparent’s house in Scarborough.

He has half-siblings from the paternal side, but he is not in touch with them.

He learned Amharic while living with his grandmother. He has a keen interest in music since his childhood days.

He dropped out of college to pursue his career in music.

He is one of the most famous faces in the sector of Hip-Hop, Rap & Pop Music industry.

He is not married yet. He has dated celebrities such as Selena Gomez and Bella Hadid.

She is so close to her son. She loves and supports him a lot. They spend lots of quality time together.

They celebrate every occasion together, such as Christmas, Thanksgiving, and their birthday too.

In 2019, on the occasion of Samra’s birthday, her son threw a party and invited their close friends.

The photos of that birthday party were so adorable.

On that birthday, The Weekend then-girlfriend Bella Hadid was also invited.

Bella also shared that birthday photo in her Instagram account and wished Samra on her birthday with a lovely caption.

He is one of the most prominent singers in the mainstream world; although a lot knows him of people at the same time, we don’t kind of know him just because he rarely does any interviews.

There are only a handful of videos interview of him on the internet, and most of them don’t even exceed more than five minutes.

The certain possibilities behind him not doing many interviews. Maybe he doesn’t want to give away too much of himself.

For a certain time, people don’t even know that either ‘The Weeknd’ was a solo artist or a group which, instead of being a backfire for his career, worked on his favor; thus, he preferred being enigmatic.

The next reason might be him being camera shy and insecure about his speaking abilities and his vocabulary.

As he never graduated High School ever since then, ‘The Weeknd’ has always been insecure about that and felt like he wasn’t articulate enough.

He further added that he used to do crossword puzzles to improve his vocabulary. At the early stage of his career, he has talked about not like being photographed.

She is the mother of a celebrity. She has a considerable net worth and salary.

She worked every type of job from nurse to catering services for a living.

His son has a net worth of 100 million dollars. He manages to earn that sum of fortune from his music career.

He earns a major portion of the income from albums sales, concerts, tours, and endorsements.

He has several business ventures also.

He is one of the best-paid entertainers in the world. He has sold 70 million albums in the United States alone so far.

He has won several prestigious awards so far, such as Grammy Awards, eight Billboard Music Awards, and many more.

He has released four studio albums so far. They are shown below.

Her son bought a lavish house in Toronto for her.

The Weekend has a Mansion in Hidden Hills, California, in three acres of land.

He owns a Penthouse in Los Angeles too. He has collections of exotic cars also.