79 years ago on this day Hamle 27, 1926E.C (Aug.3, 1933)  Laeke Mariam Mandefro who later became Abuna Yesehaq, Archbishop of Western Hemisphere Diocese of Ethiopian Orthodox Tewahdo Church was born. His father Grazmach Mandefro and his mother Woizero Welete Mesqel were faithful followers of Ethiopian Orthodox Church (EOC). His father wanted to enroll Laike Mariam in a secular public school where he could receive modern education. His mother, concerned that her son would be considered a Catholic if he attended a modern school, insisted that he receive the traditional church education. As a result, he began his theological studies at the age of seven at the famous Abune Gerima Monastry. He was first ordained as a deacon and later received the rite of a monk, and then was or-dained a priest by the Archbishop of Mekele.

Then known as Abba Laeke Mariam, he continued his studies by enrolling at the Holy Trinity Theological College in Addis Ababa where he re-ceived his diploma. Upon graduation he was hired by Ministry of Education as a teacher and taught religion and Amharic in Gamo Goffa and Debre Zeit.

Later, Abba Laike Mariam returned to Holy Trinity Theological College, this time as Dean of Students and served for two years. In 1962, he and others were chosen for higher studies at the University of Buffalo In the United States. The scholarship money which had been allocated for the entire program at Buffalo was finished in just a few semesters because of the high cost of tuition and living expenses. Unable to get mor money, they had to discontinue their studies. But thanks to the New York-based Saint Vladimir Russian Orthodox Theological College, Abba Laike Mariam was able to study at Russian Orthodox Theology and receive B.A. in Divinity in 1966.

Upon his graduation, he was appointed as Administrator of the newly-established Ethiopian Orthodox Church in the Western Hemisphere including USA, Canada and the Caribbean Islands. In the meantime, Abba Laike Mariam enrolled at the New York Theological Seminary, while fulfilling his duty as ad-ministrator, and earned a Master‘s Degree in Religious Education in 1968.

When Emperor Haile Selassie visited Jamaica in 1968, he was given an arousing welcome because of the symbolic significance of Ethiopia to the black diaspora and was also thronged by Rastafarians who considered him as the modern-day Messiah. Haile Selassie denied that he was a deity. After the trip, the emperor instructed church officials including Abba Laeke Mariam to bring Rastafarians to the fold of the church.
In 1970 Abba Laeke Mariam began to minister specifically to the Rastafarian community. At the time there were tensions between the Rastafarians and the larger Jamaican population that made his work very difficult. In 1979 he was recalled again to Ethiopia. Upon his arrival, he was ordained a bishop by the Pa-triarch Abune Teklehaimanot and was named Abune Yishaq. He was then appointed Archbish-op of the Ethiopian Orthodox Tewahdo Church in the Western Hemisphere, a position he held until the time of his death.
Abune Yesehaq built lasting bridges and a wide network not only within his own Church Community, but also among various religions across the world. Through his wise leadership, Ethio-pian Orthodox churches have spread to a number of countries in the Western Hemisphere in-cluding United States, Canada, and many Caribbean nations, notably Jamaica and Trinidad and Tobago. Under his leadership, churches have also been built in Guyana, South Africa and the United Kingdom. Today the number of parish churches in the Western Hemisphere has reached over seventy.
Abune Yesehaq, who understood the need for well-educated clergy in large numbers, provided adequate training in English, Geez and Amharic, and ordained at least 200 of the new converts as deacons and priests. These deacons and priests are now successfully serving throughout the Archdiocese. In addition to providing religious education, he also organized programs for the new converts to learn about Ethiopian history, culture and language. He wrote ‗The Ethiopian Tewahedo Church an Integrally African Church‖ and several other books on church matters. 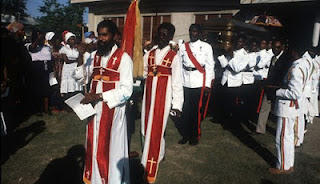 Abune Yesehaq proudly claimed that he had baptized around forty-five thousand non Ethiopi-ans into the Ethiopian Orthodox Tewahdo Faithout of which 35,000 are in the Western world and around 10000 in South Africa. Among those baptized by Abune Yesehaq is the world fa-mous Jamaican born Regae star Bob Marley alongside his wife and their children. Marley was given the baptism name of Berhane Selassie (Light of Trinity). Abune Yesehaq also performed Tselote Fithat (rite of funeral) upon Bob Marley‘s death.
Abune Yesehaq fell sick for a short while and died peacefully at Beth Israel Hospital in Newark, New Jersey on Thursday, 29 December 2005. Elaborate funeral mass and memorial services for Abune Yesehaq were held in New York, Washington, DC, Dallas and finally in Kingston, Jamai-ca where he was buried in the presence of high level church and government officials. On the occasion, Dr. Peter Phillips, Member of Parliament and National Security Minister of Jamaica remarked: “It is a tribute to his love for us…his love for the people of Jamaica and the people of the western hemisphere, but it is a special tribute that he does for us when he wished that out of all the countries in the western hemisphere which he served, he wished for his remains to be here in Jamaica,”