In the latest sign of the deep crisis that has engulfed Ethiopia, conflict in the vast Oromia region – the heartland of Prime Minister Abiy Ahmed – is escalating as political and ethnic tensions explode.

It has seen Oromo Liberation Army (OLA) rebels raid towns that were once out of their reach, and hold “graduation ceremonies” to boast of new recruits, while the government has responded with troop reinforcements and drone strikes as it rules out talks to end the crisis.

Adding to the dangerous cocktail, much-feared militias from the rival Amhara ethnic group are widely believed to have crossed into Oromia to fight the rebels. The OLA are increasingly projecting themselves as the champions of Oromo nationalism, gaining publicity in opposition-linked media outlets that, just a few years ago, treated them as marginal players in Ethiopian politics.

The government-appointed Ethiopian Human Rights Commission (HRC) says that “hundreds” of people have been killed in a “gruesome manner” in the past five months in Oromia, while a UN agency says almost a million people have been forced from their homes. A clear demonstration of the growing strength of the OLA came in November, when its fighters stormed Nekemte, a strategically important town with roads leading to Mr Abiy’s home village, the capital, Addis Ababa, and a newly built mega dam that is vital to Ethiopia’s electricity needs.

The government did not comment on the Nekemte attack, just as it does not on most other attacks, while the OLA said it had freed “political prisoners” from the town’s jail.

Residents told the BBC that gun-battles between government troops and the rebels had claimed the lives of civilians, though they could not give an exact number as casualty figures are not collated.

One resident said he had lost two of his children in the Sunday morning attack – a 27-year-old son and a 16-year-old daughter, who was a top performer in school.

“We were awake to go to church but we didn’t go because there was shooting outside. Both were killed while they were in a room,” he said, blaming government forces for shooting into their home.

Residents in other towns gave similar – and more tragic – accounts of the violence.

In Goro, a mere 100km (62 miles) from Addis Ababa, rebels overran government troops and then forced young boys, hiding in their homes, to come out and help carry their wounded away, locals told the BBC.

As the boys were doing that, they were hit by a drone strike, which killed them and some of the rebels.

Speaking in a desperate and emotional voice as he recalled the horror, one resident said that three of his brothers – all still in school – perished.

“I didn’t bury my brothers. We didn’t even find parts of their body,” he said.

The drone strikes have raised fears that to halt the advances of the OLA, the military is using a strategy similar to that it employed in Tigray, a region where a two-year conflict has subsided after the African Union (AU) brokered a truce between the government and the Tigray People’s Liberation Front (TPLF).

“In the Tigray war, though they have hit civilian targets, drones were often used against heavy weapons and military vehicles. But in Oromia, strikes have been aimed at OLA graduation ceremonies and civilians after rebels captured towns, possibly to punish people for showing support to the rebels,” said William Davison, an Ethiopia analyst with the International Crisis Group think-tank.

At least a dozen air strikes are reported to have taken place since October, with the most devastating one taking place in Bila, a town 460km west of Addis Ababa.

A medical source there told the BBC that more than 80 people died in the strike that hit the centre of the town on market day, the busiest day of the week. A priest said he had buried 11 people, including his nephew.

UK-based Ethiopia analyst Mebratu Kelecha warned that the atrocities could backfire on the government in the battle for the hearts and minds of Oromos – the largest ethnic group in Ethiopia which propelled Mr Abiy to power in 2018.

“Not only can the OLA use this as a propaganda tactic to recruit militants, but it can also use it to gain support from the local population and expand their poor supplies [of basic necessities],” Mr Mebratu said. 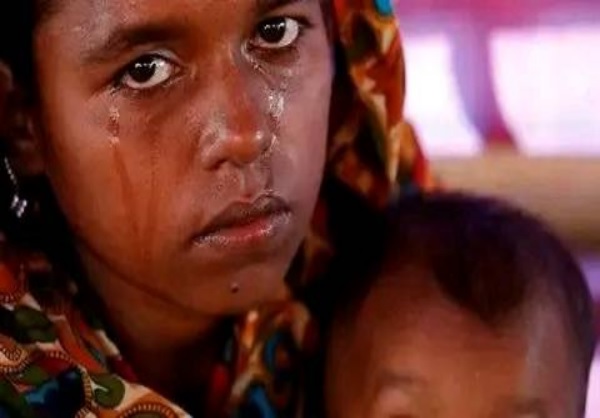 Focusing mainly on guerrilla warfare from its forest hideouts in western Oromia, the OLA’s rebellion reflects the deep fissures in Ethiopian society – the second-largest country in Africa with a population of more than 100 million that is split into myriad ethnic groups that are constantly competing for land and power.

Each of them are fiercely proud of their identities, and hold on to their culture and language, though the language of the Amharas – the historic rulers of Ethiopia – is the working language of Ethiopia.

Mr Abiy has attempted to forge a national identity and to get political parties to abandon their ethnic allegiances, but his efforts have been fiercely resisted, not least by the OLA, which advocates “self-determination” for Oromia.

Though it has never clearly spelled out what this means, its critics fear that it wants to break up Ethiopia by getting Oromia to secede.

With unemployment stubbornly high, opposition parties suppressed and Mr Abiy’s failure to address demands such as declaring Afaan Oromoo a working language alongside Amharic, there is growing sympathy, if not support, for the OLA, especially among young people, though Mr Davison cautioned against over-estimating its strength.

“In the past few years, it has managed to expand its area of activities and number of fighters amidst the government’s repression of legal Oromo opposition parties,” he said. “Yet the movement has not got in a position to be a threat to the authority of the regional government, let alone the federal government.”

The number of OLA fighters is unclear, but it is unlikely to be huge as it wages what Mr Mebratu describes as “fast-paced, small-scale operations to undermine state power through prolonged, low-intensity confrontation”.

To finance its operations, it has also been accused of emptying banks of cash and kidnapping for ransom.

In one of the most high-profile cases, the rebels abducted more than a dozen employees of the Dangote Cement factory – owned by Nigerian billionaire and richest man in Africa, Aliko Dangote – on 30 November in Ada’a Berga district, less than 90km from the capital.

About 17 of them were released after each of them paid between $5,000 and $9,000, sources told the BBC, though the company has not commented.

To compound the crisis, the rebels have also been accused of killing hundreds of civilians – many of them farmers – from the Amhara ethnic group, which fears that the OLA wants to drive them out of Oromia, with thousands now living in camps in Amhara.

While Amhara militias – referred to as Fano – are said to have entered Oromia to defend their ethnic group. They too have been accused of committing atrocities – including raiding around five towns in various districts in western Oromia.

An Oromo government official said that in the Kiramu district alone, the militias had killed 244 Oromo civilians, burnt 568 homes and stolen 25,000 cattle.

A leading academic, Hasan Yusuf, said that he had lost eight members of his family in Angar Gute town in November, with other reports suggesting that judges and civil servants have also been killed by the militias.

In late August in Amuru district, 60 civilians were killed by armed men, including some who had come from Amhara, the HRC said at the time, though it did not mention the Fano.

The attacks have forced tens of thousands to flee their homes.

Many local Oromos believe the Fano militias are on a land expansion campaign aimed at redrawing the internal boundaries of Ethiopia.

They worry that a situation similar to Tigray could develop, where the militias joined the fight against Tigrayan forces at the start of the conflict there in November 2020 and helped the Amhara regional government seize agriculturally rich western Tigray.

But Amharas deny that the Fano have crossed into Oromia, saying their militias were trained by the Oromia government to defend their communities after four years of attacks by the OLA.

Many Amharas, as well as Oromos who support Mr Abiy, are deeply suspicious of the OLA and TPLF, pointing out that the two joined forces and advanced towards Addis Ababa last year in a failed bid to seize power.

The Tigrayan fighters then retreated to their heartland, where they engaged in fierce battles with federal troops until the two sides agreed to a truce following intense diplomatic pressure to end a war that has been far more devastating than the conflict in Oromia.

As for the OLA, it appears to have escalated its hit-and-run operations while also declaring that it was willing to enter into talks with Mr Abiy’s government.

The government has rejected its overtures, describing it as a “terrorist” movement with “no clear chain of command and political agenda”.

But in a sign of growing pressure for it to change its stance, dozens of Oromo lawmakers from Mr Abiy’s ruling party have taken the unprecedented step of calling for talks.

One of them, Buzayehu Degefa, told the BBC that the peace initiative in Tigray needed to be “replicated in Oromia”, while Oromo activists have also appealed to the international community to step in to help end what they call Ethiopia’s “forgotten war”.

It is a far cry from the days when Mr Abiy’s premiership was widely welcomed as Ethiopians hoped that it would lead to peace and democracy after decades of state repression.

Instead, it unleashed tensions that the prime minister has battled to contain, as political and ethnic groups settle old scores and advocate vastly different views on what a future Ethiopia should like.

The analyst Mr Mebratu warns of devastating consequence if a national forum, attended by all parties and groups, is not convened: “In the long run, if a peaceful resolution is not found to the conflicts, heavy civilian causalities will increase.”