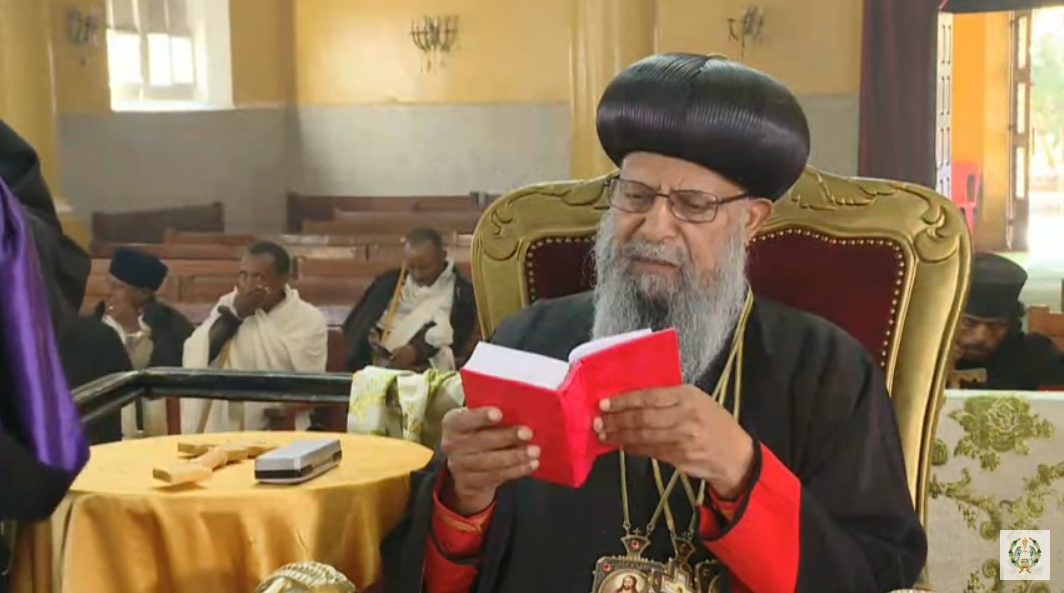 This weekend, Abiy Ahmed dropped a well-timed and well-coordinated bombshell on the EOTC. Abiy Ahmed moved to establish a second EOTC Synod and split the church. The move had shocked the entire nation, especially the Orthodox faithful that have just finished a celebratory worship season. Ahead of this latest strike, Abiy Ahmed had conducted continual weakening and testing operations against the church. His most recent attacks involved his protégé Pastor Yonatan (financed, partly, by Abiy Ahmed’s Nobel Prize award money) and others who conducted sustained attacks against the Orthodox Church and its creed.

From the get-go, as a former TPLF spy himself, Abiy Ahmed was able to identify and use elements of the spy network implanted in the church to effectively silence the church. His greatest asset in this regard was Daniel Kibret, who was a revered preacher and leader of Mahbere Kidusan (Society of Saints).  Operating in the guise of a prolific deacon, Daniel was able to penetrate the highest echelons of the EOTC. Ably used Daniel Kibret and other TPLF implants to crush any budding resistance in the church on account of the Amhara and Orthodox genocides.  [As an aside, the TPLF trained many combatants as deacons and inserted them into churches and monasteries a decade before its assumption of power. Some of these TPLF implants rose to the rank of church heads and Bishops. In such a way, the church treasury was plundered, church relics were stolen, church leaders were assassinated etc. Quite a few of these agents, believing TPLF rule to have become eternal, came out in public to brag about their exploits in destroying the EOTC and its monasteries (little did they know that TPLF’s days in the saddle were numbered). ]

The nature of the bombshell

What Abiy Ahmed conducted was a coup d’état against the EOTC leadership. The strategy employed is the establishment of a parallel illegal EOTC Synod. For this purpose, Abiy had sent the now fake Patriarch, Bishop Sawiros to the United States to canvass support and collect funds. Upon his return with other collaborators, the government arranged for Sawiros to conduct a clandestine meeting in a rural church outside Woliso, 100 miles from Addis Ababa. At this meeting, Sawiros named himself Patriarch and anointed 25 ‘monks’ as bishops. Videos, pictures and statements were released to the media showing Sawiros, in golden Patriarch regalia, flanked by dozens of red-clad Bishops. These Bishops were assigned to several diocese all over Oromia and the South. That Abiy is behind all this has been proven, among other things, by the protection and accommodation given to the conspirators, while the official security detail of the Holy Synod was removed. Abiy has also sent a high level envoy including his Minster of Defense and Head of Security to pressure the Synod to accommodate the coup plotters.

Previously, Abiy had successfully pulled such a coup against the incumbent Muslim cleric, Haji Mufti, the highest authority of Islam in Ethiopia. At the time, via similar clandestine meetings at hotels, Abiy replaced the Amhara Moslem cleric Haji Mufti with a Wahabi Oromo Muslim Cleric Haji Tufa.  The strategy used against the Muslims was also identical to that used against the EOTC in another respect. Abiy had been able to get access to meddle in Islamic affairs by pretending to bring together two sects of Islam in Ethiopia together. He had used that access to ingratiate himself to one group and to purge the other.

Earlier attacks against the EOTC

Earlier attacks against the EOTC included the burning down and closure of several churches in Oromia Region, Benshangul-gumuz, Debub Killil (now Sidama Killil) and Amhara Region. These attacks were also accompanied by the massacre of Orthodox Christians, the burning down of their homes, farms and businesses and their forced displacement. In the cities, confiscation of church property, including sacred land where the church conducted its worship, was becoming a common occurrence.

Another early Abiy-era attack on the Church was the attempt by Jawar Mohammed and group to establish a separate Oromo Orthodox Church. A former EOTC clergy and parliamentarian member of the OPDO political party, Qesis Belay, was in charge for this project. The project failed but Qesis Belay was left at the highest EOTC office, possibly, as a sleeper agent.

During the TPLF-PP war, several churches in Tigray and Amhara were attacked. Gruesome massacres took place in Churches like Chna T/Haymanot. Church property, including ancient relics, was looted.

In the era of the TPLF, the EOTC Synod in exile was able to expose and resist TPLF-led attacks against the Church and the faithful. However, Abiy Ahmed, in the guise of uniting the exiled Synod with the resident Synod, brought all the church under his total control and an effective resistance against the coordinated attack on the Church could not be surmounted. Fathers of the Church, both inside and outside the country, were silenced. During the war, Patriarch Mathias was stifled, prevented from addressing the faithful.

Why (is Abiy attacking the EOTC)?

The Ethiopian church had been targeted for attack by all detractors of the Ethiopian state. But why is Abiy Ahmed doing it?

The last two emanate from Abiy Ahmed’s OLFite creed. A creed that believes in the future of the Oromo only as a separate or as a singularly, fully and exclusively-dominant nation. The creed envisions total assimilation and total subjugation of non-Oromo elements. Abiy has subscribed to this creed since his teenage years.

Now that the “Final Solution” documents* have surfaced, Abiy having not been able to destroy the documents, needs to destroy structures that could bring a law-suit against him. EOTC is one such major structure. In fact, elements within the church had established an organization to fight the genocide against Orthodox Christians. The OTAG (Orthodox Tewahido Against Genocide) was one such organization. OTAG worked with other similar organizations to raise close to $30 million birr. It was, however, co-opted by Abiy Ahmed and the funds languish idly in the bank while the genocidal fires rage against the Church and its members. Yet there are still other organizations such as Genocide Prevention in Ethiopia (GPE), and now that the documents have been exposed, Abiy Ahmed has to act swiftly to dismantle potential sources of resistance.

Last but not least, Abiy’s Oromo-led government is moving to annex several Amhara, Somali, Sidama, Gambella and Southern districts where Oromo forces have opened coordinated attacks against rural and urban residents. The ATaye region is currently suffering the tenth OPDO/OLF attack since Abiy came to power. Just this weekend, Abiy had over fifty Amhara Special Forces liquidated in their camp. Abiy’s attack on the church is timed so as to provide a distraction from this sustained genocide against Northern Shewa Amhara that he considers obstacles to the annexation of Wollo into Oromia.

*Documents of the signed meeting minutes of the Benshangul-gumuz ethnic cleansing and genocide project created by TPLF and executed by PP have now been made public.