Fierce and noble: A tribeswoman in a Hammar village on the Omo River in Ethiopia

The road to the Mursi heartland is long and best tackled one obstacle at a time. Just to call it a road is a stretch, really. Steve Turner, our guide from Kenya-based Origins Safaris, estimates it has been five or six years since the last vehicle drove this way. Far beyond any game preserve or luxury camp comforts, we are on our way to visit the “vanishing” tribes of Ethiopia’s Omo River Valley, one of Africa’s–and the world’s–last great undiscovered places. 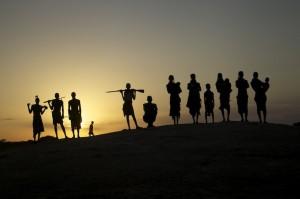 The end of the road in Ethiopia’s Omo Valley. Photograph by Michael Lorentz

The itinerary evolves as we go along. Our tag-team pair of Land Cruisers galumphs down the scrubby track at a hiker’s pace, and every hundred yards or so the vehicles stop short, the doors swing open, and out come the drivers and guides to stare blankly at whatever gully, tree or torrent is blocking our way. It’s hot–84 degrees and rising at 10 a.m.–and the tsetse flies are on to us.

Judging from the overgrown ravine, or donga, between where we are and where we need to be, I suspect Turner is being conservative on the six-year time frame. “Let’s give it a go,” he says, and the forward Land Cruiser creeps into the hole, instantly getting stuck. Turner gazes down at the scene with his hands on his hips. “Right,” he says. “We need to start digging.”

Turner warned me this would not be an easy trip. Even in our age of global everything, the 15 ethnic groups inhabiting the hills and banks along the Omo are so cut off that they have no written languages or calendars (an Omo “clock” is a string with knots tied to indicate the number of sunsets before a gathering or ceremony). Intrepid foreigners first contacted tribes like the Mursi, famous for their dramatic clay lip plates, in the 1930s but even now Turner’s is the only company touring the Omo River itself.

When I first e-mailed Turner asking for details on the expedition, he wrote: “Having been to Africa before, you’re already oriented, but do remember that you probably have never been anywhere quite as remote and inhospitable as the Omo River. If you are inconvenienced by spartan accommodations, intense human contact or are apprehensive in unfamiliar situations, then I’m sorry but this expedition is not for you.” When I informed him that, actually, this would be my first trip to Africa, he replied, “Prepare to be uncomfortable.”

In many ways I was pleasantly surprised. In addition to Turner, we had the expertise of a second guide, Michael Lorentz (Turner is his on-the-ground operator). Lorentz’s Cape Town safari company, Passage to Africa, is highly regarded among a well-traveled crowd for putting together unusual tours. The company declines to release the names of its guests, but claims a customer list of primary players from Wall Street, billionaire Silicon Valley founders and Hollywood A-listers. Typically Lorentz flies to his clients’ homes months in advance to blue-sky each detail: private helicopters, teams of porters, the works. These aren’t adrenaline-thirsty backpackers but “travelers’ travelers,” who understand that the greatest luxury today is returning with the most unique experience. 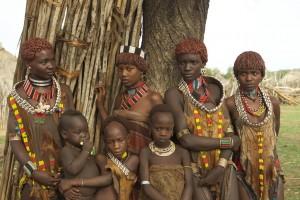 Members of the Hamaar tribe use red-ochre clay and animal fat to pleat and color their hair. Photograph by Michael Lorentz.

This experience is certainly a whopper. Already several days into a ten-day trip, our small traveling party has been pushing from dawn until evening’s first mosquito bite, observing ancient customs, rites and everyday activities. Some are beautiful, many are absolutely harrowing. Our first day buzzing upriver in the Omo’s only motorized boat, we encountered a group of exuberant young Karo tribesmen on the banks, adorning themselves with white body paint and clay headpieces. Our charismatic translator and tribal ambassador, Lale Biwa, explained that 42 boys were about to join the ranks of the Karo elders. Turner remembered he had a stash of ceremonial ostrich feathers and presented them as a gift, which got the boys leaping and whooping euphorically. A few minutes later, skinny old men wielding long green sticks (and AK-47s; they’re ubiquitous in the Omo) began lashing hard at the boys, chasing them uphill to the nearby village of Dus. There they joined a few hundred others and danced jubilantly into the night. The next day, as a goat was sacrificed in honor of our arrival, we were told we were the first outsiders to witness such an event. Given the realities on the ground, we may not be many years before the last.

Next summer the massive Gilgel Gibe III Dam is scheduled to begin operations several hundred miles upriver. The controversial project will more than double electrical output in Ethiopia,  where less than two percent of the rural population has access to the grid. But it may displace as many as 200,000 indigenous people who rely on the Omo’s natural flood cycles, and whose land may now go dry. Most locals we meet are unaware these changes are coming.

Next summer the massive Gilgel Gibe III Dam is scheduled to begin operations several hundred miles upriver. The controversial project will more than double electrical output in Ethiopia,  where less than two percent of the rural population has access to the grid. But it may displace as many as 200,000 indigenous people who rely on the Omo’s natural flood cycles, and whose land may now go dry. Most locals we meet are unaware these changes are coming.

That the end is near in a region once inhabited by some of our earliest ancestors (Australopithecuswalked these very river banks) is only one reason to visit the Omo now. It is also a place that challenges the traveler – at least this traveler – like nowhere else. “You always need someone with a Plan B,” as Lorentz says. There is the day boating up the Omo, for example, with crocodiles splashing everywhere in the cocoa-brown water, when our outboard motor goes dead. Two things pop into your head: there is no rescue boat anywhere nearby, and this is definitely not a Disney ride. “Don’t give over to phantom fears,” Lorentz says discreetly, sensing my anxiety. “If we need to, we’ll drift downriver steering with an umbrella as a paddle.”

From the moment our chartered Cessna landed at a ragged airstrip near the Kenya-Ethiopia border, practically everything we’ve seen has tested my First World sensibilities. How does a Westerner respond to a Dassanech ceremony celebrating female circumcision? Or to learning that a child’s good or bad fortune is determined at birth by reading the intestines of a goat or cow? Or to a practice known as mingi, which holds that children considered “polluted” (even a chipped tooth can do it) must be abandoned or killed to prevent further bad luck. As the sun sets on these ancient and bewildering practices, it is difficult enough for visitors simply to behold what is.

And so we take photographs. In a perverse way, it’s why we are here. My fellow travelers, each of whom paid $16,000 for the trip, include an executive from a Silicon Valley tech firm and the wife of a Starbucks cofounder. But here we are just paparazzi. At a bull-jumping ceremony that is part of the Hamar tribe’s marriage rite, I take more than a hundred photos of a boy running naked across the backs of cattle as his female cousins are ritualistically whipped to spur him on. Another morning, Lale asks a Nyagatom woman to remove her Western-style top so we can photograph her artful scars. At sunset one night in Dus, Turner arranges a dozen Karo tribespeople on a ledge over the Omo so we can shoot their exotic silhouettes. 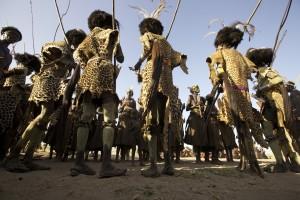 It is as awkward as it sounds. Think Vogue as edited by Joseph Conrad, and made even odder by the fact that we must pay for photos. Adults get 5 birr, around 25 cents, and children get 2–around 10 cents, though disputes do arise. Figuring I was showing respect in a Nyagatom village by photographing the fiercest-looking elder first–his ritual chest scars signified he had killed an enemy–I found myself instead calling for Lale’s help to negotiate my way out. After that encounter, I stopped taking photos almost entirely

When we finally get the Land Cruiser out of the hole on the way to the Mursi (after the only towrope within miles snaps like crepe paper), we Plan B an alternate route the next day. Wake up is 4:30 a.m. at our surprisingly comfortable tent camp (private bucket showers, European linens, a talented chef) for what turns out to be an 11-hour travel day.

Visiting the tribe is just as much of a rush as the journey. The women of the Mursi pierce their lower lips as teenagers and insert clay or wooden lip plates up to seven inches wide to attract a spouse. One elderly woman wears a headdress of dried corncobs. A young man has a ritual scar in the shape of a crown. Seeing these remarkable adornments up close is shocking, awe-inspiring and more than a little sad. Like so much else in the Omo Valley right now, it forces you to face up to the otherness of traditions that are ancient, unsettling and extreme. And to contemplate what it may mean to lose them.