The prosecution, which promised to prove that the defendants intended “to overthrow and dismantle the duly established government through violence”, has so far failed miserably, say analysts. The so-called “damming evidence” that was to be provided by the government did not materialize. The prosecution’s case was so weak that observers of the trials have noted seeing guards assigned to the defendants as well as courtroom attendees struggling to suppress laughter at seemingly infantile attempts of the prosecution to assign blame. Some Officials of the ruling party have even gone so far as to accuse Prosecutors of purposefully sabotaging the government’s case.

Amnesty International in its report has held that the “prisoners of conscience” have not used or advocated violence and expressed concern about the fairness of the trial. Amnesty urged the Ethiopian government to “release immediately and unconditionally, with charges withdrawn, the political opposition leaders, human rights defenders and journalists, who are prisoners of conscience and have not used or advocated violence.”

4 October 2006 – CIVICUS, joined by voices from over 20 countries, today wrote to the Prime Minister of Ethiopia Meles Zenawi, urging him to fulfil his promise of a swift and fair trial for civil society activists detained since November 2005.

On 5 October, the mass treason trial within which Daniel Bekele and Netsanet Demissie, both Global Call to Action against Poverty coordinators, are charged will resume after a two-month court recess. Their trial began on 2 May 2006, together with over 100 opposition members and journalists.

“We urgently appeal to the government of Ethiopia to use this moment for an urgent and thorough review of their cases, and to consider dropping the hefty charges levelled against these two courageous activists,” said Clare Doube, Manager of CIVICUS’ Civil Society Watch programme.

Daniel and Netsanet are highly respected throughout the civil society sector in Ethiopia for their tireless advocacy on human rights, poverty reduction and social justice. Despite their peaceful work, they currently face the charge of “outrage against the constitution or constitutional order,” which carries a possible sentence of death or life imprisonment. Both have repeatedly been denied bail, even after appealing to the highest court.

While emphasising the separation of powers and the independence of the judiciary, the government of Ethiopia has consistently assured the international community of a quick and legitimate trial for Daniel and Netsanet. In its letter of appeal, CIVICUS urged the Prime Minister to live up to this promise.

“Civil society in Ethiopia is actively engaged in development and poverty reduction work,” said Doube. “There is no doubt that the continuing detention of these courageous civil society activists discourages work vitally important to the welfare of the people of Ethiopia.”

CIVICUS also reminded the government of its commitments to freedom of association and expression, as guaranteed to the people of Ethiopia in their national constitution, and the numerous international and regional conventions to which Ethiopia is a signatory. 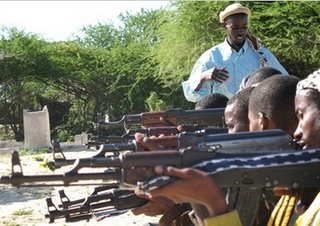 KISMAYO, Somalia (AP)–Somalia’s radical Islamic leaders held a rally Wednesday that drew thousands of mostly women and students in the port city of Kismayo, and vowed to wage holy war against any group that tries to stop their military advances. “The time for ambiguity and hypocrisy has ended. By God, we will wage a holy war against our enemies,” senior Islamic official Mohammed Wali Sheik Ahmed told a crowd of at least 5,000.(More…)

“…Sadly the current leadership that attempted to institute democracy due to diplomatic and international pressure abused it from the outset. A regime that miscalculated the outcome of the people’s vote and quest for democracy was grossly humiliated. Consequently, it incarcerated the opposition indiscriminately and took undemocratic measures to stay in power. To the wider world the regime is worse off from the one it ousted 15 years ago. Several actions of the regime, prior and
after the election kindle the way to ethnic sectarianism and possible dismemberment of the nation.No doubt the country is at a critical political crossroads….” (More…)