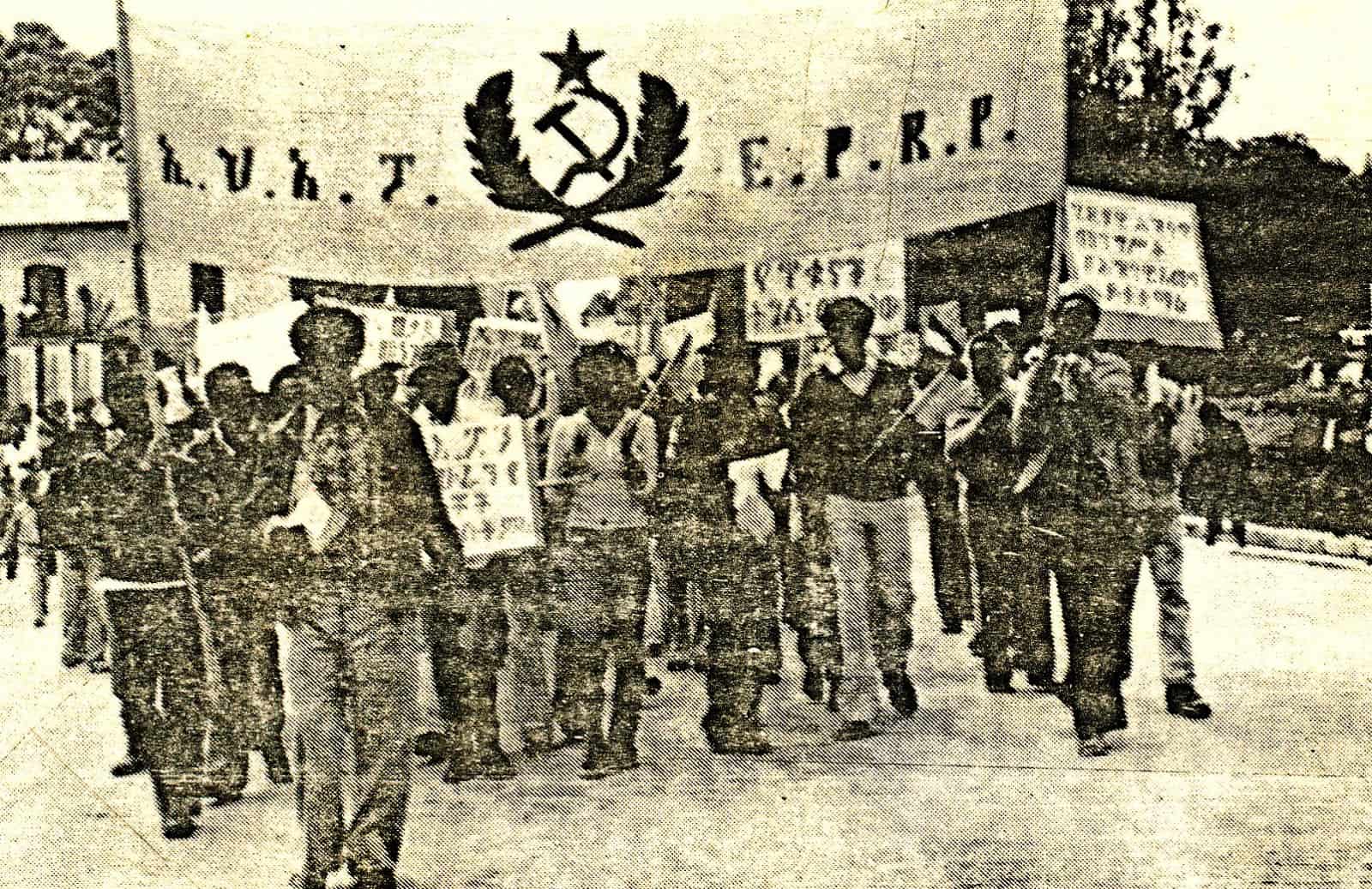 The absolute regime of Emperor Haile Selassie was first challenged by university students.

After World War II, Ethiopia’s Emperor Haile Selassie took pains to ‘modernize’ Ethiopia and bolster but higher education. Selassie’s control of Ethiopia was total. As ‘supreme ruler,’ he abolished all political parties and banned groups from forming cohesive organizations. Selassie was surrounded by a small group of social elites that supported him, and although the government had a Parliament, it wielded very little power. Well into the 1950’s, Ethiopia lagged behind other African nations in education and many of the social elites sent their children overseas for higher education. As part of his modernization plan, Selassie expanded education rapidly. In 1951, Selassie founded the University College of Addis Ababa, which was administered by Canadian Jesuits. To match the speed with which education was expanding, educators and curricula were brought in from Western nations, implanting Western ideals into the Ethiopian classrooms. Despite the Western influence, the government kept a very strong hold over what happened at Addis Ababa, heavily censuring the first inklings of student newspapers that manifested in the late 1950s. The administration, with Haile Selassie as the University’s chancellor and ample members of the government on The Board of Governors, also censured what went on in the classroom and in student groups.

In spite of, or perhaps because of, the tight censorship of ideas and actions, unrest began to boil among the university students in the early 1960s, becoming a full-fledged student movement by 1967. Students began their push for political and social change and participation subtly in the form of poetry. In 1962 at Student Day Ceremonies in May, students read poems that were charged with political commentary that criticized Selassie’s regime. After the readings, several students were suspended and many more warned not to meddle in politics, but this did not hinder the students from doing so.

Although the unrest was widespread in University in the early 1960’s, the students of Addis Ababa lacked any central leadership or a unifying cause. But disturbances in the forms of protests continued, causing the university to shut down in 1963 to bring things back under control. In 1964 students rallied around the issue of land tenure, and in 1964 and 1965 they held large demonstrations under the slogan ‘Land to the Tiller!’ which called for a redistribution of land from wealthy landlords to working class tenants. The students did not direct their protests at Emperor Selassie, but instead appealed to Parliament, which was in the midst of debating the polarizing question of land distribution. Students held demonstrations outside the Parliament building in 1965 in favor of redistribution, and their cause was bolstered from abroad, as nations like Sweden threatened to cut ties if reforms were not made. Despite the students’ protests and pressures from abroad, the regime did not budge on the issue and created a law banning student organizations, unions, and demonstrations. In 1966, the students added a new cause to their movement, demonstrating against the imprisonment of beggars in camps outside Addis Ababa. Their demonstrations led to small improvements in the camps’ facilities and treatment of the incarcerated.

Enthused by their small victory, students reorganized their efforts in 1967, when the movement became more unified and cohesive. The student unions within the University that were protesting various issues they had with the government joined into one organization, the University Students Union of Addis Ababa (USUAA) and narrowed their focus to overthrowing the government. The University newspaper News and Views was replaced by a much more politically charged publication called The Struggle. The student movement now had a single, unified voice. A major theme that drove the movement was anti-Western influence and the opposition to the large military presence that the US had in Ethiopia at the time. The students saw the US as keeping Emperor Selassie in power, and hence they focused their actions on opposing Western influence. In March 1968 they demonstrated at a fashion show in protest of mini-skirts, a style that the students saw as un-Ethiopian. They organized a student boycott and picket lines and attempted to stage a large demonstration in the streets surrounding Addis Ababa. Police cracked down immediately, resulting in a clash that saw some fringe violence from students.

In 1969 the campaign had begun to spread to other colleges, universities, and even high schools. The USUAA drew up a systematic list of ten demands on the government and distributed them widely in pamphlets and by word of mouth. These demands included the overturning of new school fees, the expulsion of the Peace Corps from Ethiopia, an overhaul of the government and education system and trials for police officers who had fired on students at peaceful demonstrations. The students continued to campaign in favor of these demands with their support system mounting. They accused the government of mismanaging resources and criticized the state of education in Ethiopia. Enthusiasm among young students all over the nation snowballed until a large part of the school system had to be shut down due to massive demonstrations, school boycotts, and riots. When secondary schools attempted to reopen, students staged a sit-in in schools that yielded 500 arrests and one death when police arrived.

Finally, Emperor Selassie made an appearance on television agreeing to discuss the demands with the students, but at the same time the newspaper The Struggle was banned. At the end of 1969, Selassie had made some concessions by firing his minister of education and pardoning some of the arrests earlier that year. Selassie tried hard to hide the massive unrest from international eyes, heavily censoring newspapers and publications. However, these concessions were not enough to stop the student movement.

In the period between 1969 and 1974, the government cracked down hard on the student movement, violently dispersing organized demonstrations. Despite the strength and support of the movement, there were some organizational issues. The USUAA could offer no alternative to Selassie’s current regime, as they had no leader that wanted to step forward. Additionally, the government was trying to suppress an Eritrean revolt at the same time as dealing with the student revolt, and some members of the USUAA were split on whether the movement should take advantage of the country’s quasi-civil war to topple the regime. The movement became split between more radicals and moderates. The president of the USUAA, Tilahun Gizaw, advised the students that they needed to reevaluate their plan. In late December, Gizaw was assassinated, and the next day the Imperial Guard broke up a meeting of several thousand students by firing into the crowd. Students stole Gizaw’s body from the morgue and refused to return it to the family, resulting in another aggressive strike by the Imperial Guard and at least three deaths.

The violence drew international attention quickly, sparking articles of disapproval from The Frankfurter in Germany and a three-hour sit-in by Ethiopian students in the Embassy in Russia. Despite the attention, the violence continued, and every demonstration the students held was cut down by force. In 1971, secondary school teachers went on strike in support of the USUAA, which was facing sanctions from the regime that affected the Addis Ababa’s dorm facilities and meal plan. Students staged more boycotts and demonstrations, but many deteriorated into violence more promptly. The Board of Governors effectively suspended the USUAA in 1972, disbanding central leadership. Divisions within the movement grew wider.

In 1973, the students learned of the widespread famine in the province of Wollo, which the government was doing nothing about. Students boycotted classes to hold a meeting to discuss what could be done about the famine, but this meeting was violently broken up by riot police, who beat students, employees, teachers and bystanders without discretion. At the end of 1973 students boycotted classes again calling for the reinstatement of the USUAA. The boycott was also broken up violently by riot police.

Despite the fact that the student movement had become increasingly disjointed by 1974, it had succeeded in weakening the government’s control significantly and created a general era of political unrest. Students continued to campaign relentlessly in 1974 for the government to recognize the famine in Wollo, and the movements were compounded by the beginnings of the 1974 revolution or ‘creeping coup’ led by CELU that succeeded in ousting Emperor Selassie.

For more information on the 1974 revolution and what took place after the student movement more or less merged with the broader movement for democracy, please refer to “Confederation of Ethiopian Labour Union (CELU) general strikes for wages and union rights, 1974”.

Name of researcher, and date dd/mm/yyyy: