As the European Central Bank stops printing new €500 notes, the value of these big bills could climb as people pay more to own them.
The ECB said on Wednesday that it will stop printing a note that police agencies say is a preferred tool for international criminals.
But like pop stars and painters, the value of these notes may increase in death.
Some of the ECB’s senior policymakers didn’t like the idea of getting rid of the note entirely. So while new €500 notes won’t be printed any more, they will remain legal tender.
Typically, when a central bank stops producing a denomination or a series of banknotes, it offers a fixed period in which it will still be accepted as legitimate currency.
For example, a British £20 note bearing the image of Edward Elgar was issued from 1999, ceased production in 2007 and stopped being legal tender in 2010. In the eurozone, national central banks will still exchange their old currencies, from the franc to guilder, for euros. But they can no longer legally be used purchase goods and services.
Restricting the supply of the €500 note could actually result in this note, one of the largest in major economies, trading at a premium to other euro denominations. Even before the decision, there were reports that this was happening.
In 2015, Europe’s umbrella organization for policing, Europol, warned that law enforcement agents had informed them that €500 notes trade hands at above their face value in the criminal world, “so important is their role in cash transportation for money laundering.”
And that phenomenon is not unique to Europe.
The highest U.S. dollar denomination, the $100 bill, trades at a significant premium in many emerging markets. That’s according to Peter Sands, the former CEO of Standard Charted who sparked the discussion over high denomination banknotes earlier this year.
Argentina, Ethiopia, Indonesia and India are among the countries where buyers will stump up more of their local currency to get hold of $100 notes, paying between 2% and 20% more for the highest denomination, Mr. Sands said. 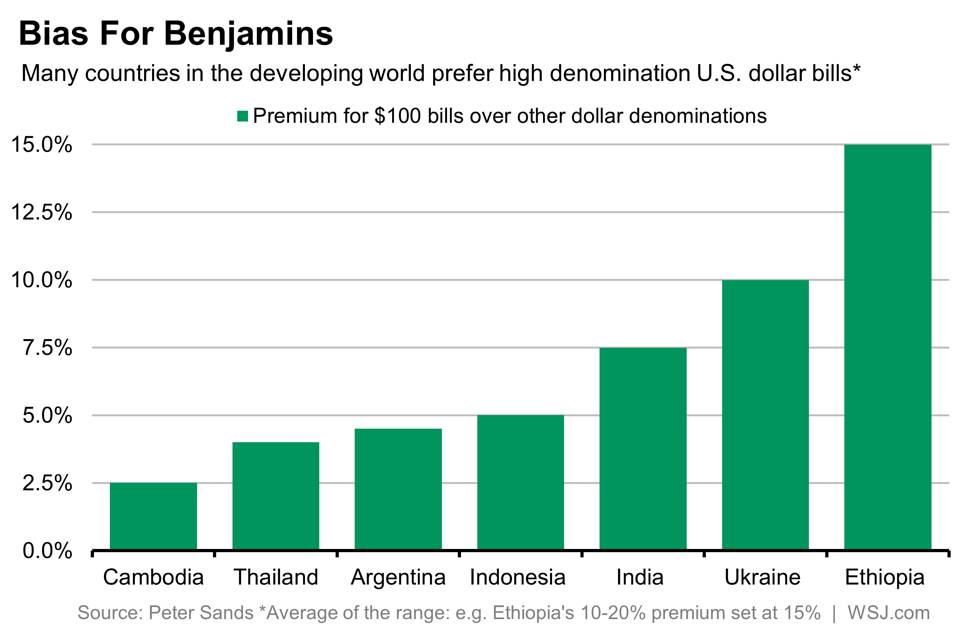 Though the idea seems odd, history shows that notes of the same ostensible value can trade at a premium to others.
Before the U.S. National Bank Act in 1863, many U.S. dollar notes were issued by private banks.  The notes were traded at values based on how creditworthy the bank was regarded.
In much of the country, and particularly during banking panics, that made some dollars worth more than others.
The ECB’s decision to abolish €500 notes isn’t likely to drive their black market value to stratospheric heights. Anyone looking for large bills still has the €200 note to use, still a higher denomination note than most advanced economies issue.
All the same, the number of €500 notes in active circulation is likely to fall as banks return them to the ECB and the notes eventually physically decay.
The ECB’s compromise doesn’t seem likely to stop the €500 from being used by criminals: But it may mean they have to pay more for the privilege.