This post is part of the Global Moms Relay. Every time you share this post, Johnson & Johnson will donate $1 (per action), up to $300,000, to four causes helping improve the health and wellbeing of moms and kids worldwide: MAMA, Shot@ Life, U.S. Fund for UNICEF and Girl Up. Scroll to the bottom to find out more.

She weighed little — just 1.5 pounds. Tragically, no one thought she would live another day. Betselot Addisu was born prematurely at around seven months. She was delivered by C-section at a private hospital to save her mother’s life, who was in critical condition with severe high blood pressure.

Betselot was immediately taken to an incubator to simulate the warmth of her mother’s womb. This lasted for 12 days before she was referred to Yekatit Hospital, an advanced Newborn Intensive Care Unit (NICU) in Ethiopia. The baby had not put on any weight. She had severe anaemia and the beginnings of damage to her intestinal tract — the second most common cause of death in premature babies.
Established in 1923, Yekatit Hospital and Medical College is one of the oldest and most important public hospitals in Ethiopia. It provides services for the city’s population of approximately 4 million. There, Betselot received close attention and care from the unit’s special newborn nurses and doctors, particularly Dr. Mulualem Gesesse, the only neonatologist practicing at the hospital.

Betselot stayed in the NICU until she was 61 days old. She showed incredible improvement: her weight increased from 1.5 pounds to 2.4 pounds, with no sign of infections; she was able to breathe on her own and was tolerating oral feedings. In addition to medical treatment, Betselot’s mother and father received education on how to care for their preterm baby with kangaroo mother care — placing the baby on their chests for skin-to-skin warmth, something they could easily continue at home to keep Betselot warm and growing. 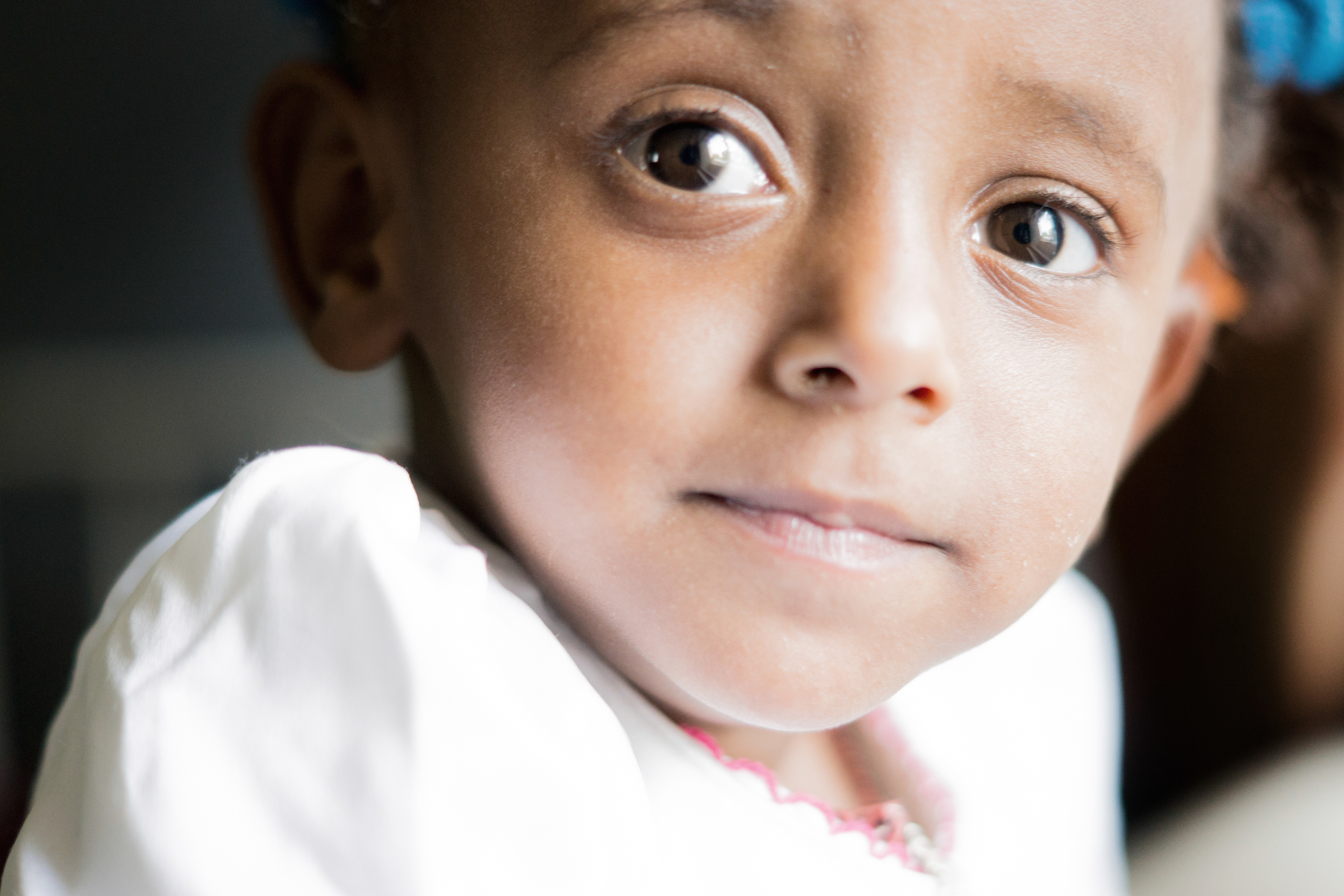 Baby Betselot, 20 months old.
The neonatal service began with two beds, seven years ago. Now it has 50 beds thanks to the support of the government and partners such as UNICEF and Johnson & Johnson. The hospital has one neonatologist, five general practitioners, 18 NICU trained nurses and ten general nurses.
Newborn health is improving in Ethiopia because of the hospital’s work. They admit an average of 215-235 newborns to the NICU ward per month. The major causes of admission are infection, preterm birth or low weight and difficulty in breathing. The NICU is saving thousands of lives and continues to improve: In 2012, a total of 1,295 newborns were admitted to the NICU, and the death rate was 12 percent, and in 2013, 1,665 newborns were admitted, and the death rate was 9 percent.
Just a month ago, little Betselot visited the hospital with her mother and father. She is an active and bright 20-month-old toddler. She walks, tries to communicate with her parents, and she looks very happy. 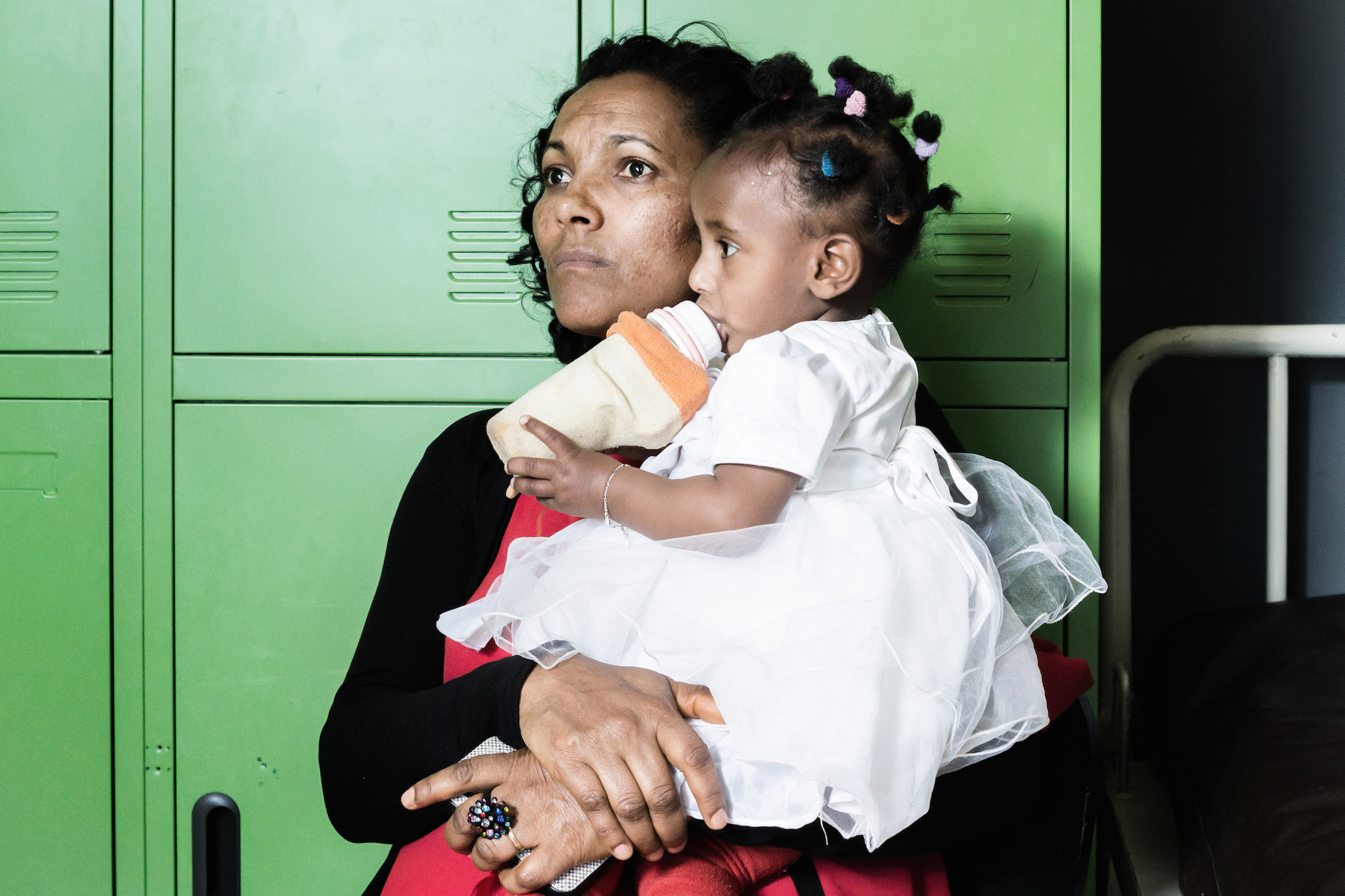 Baby Betselot and her mother, Mrs. Wubshet Gizaw.
Her parents are astonished by how Betselot endured being on this earth earlier than the normal nine months. They said, through their prayers and by the support of all the staff of Yekatit 12 Hospital that their baby girl was able to fight her condition. “We were not thinking that our first-born would survive,” said her mother, Wubshet, the thought of losing her baby showing in her face.
“We have a special gratitude to Dr. Mulualem for her strict follow-up with Betselot. More importantly, we appreciate all the NICU staff for their warm and unreserved care, treatment and support. We are proud of our Yekatit 12 Hospital.”
The few but experienced senior staff members, like Dr. Mulualem, are training hospital staff from all over the country and plan to open a Master’s Degree program. “Despite the scarcity of Neonatology Specialists, the Hospital College staff and management are determined and doing their best in developing advanced newborn care skills in the country with the dedication and support from the Ministry of Health, and collaboration with partners,” says Mr. Esrael Ataro, Vice Head of the College.
The support from the Ethiopian government and partners like Johnson & Johnson helps to bring the hospital up to standard with new equipment and the capacity to train more health service providers. “I hope we can increase our capacity to save more babies like Betselot, so we can treat these babies, relieve the agonies of their parents and create a better community,” said Dr. Mulualem. This project is part of our critical work in Ethiopia: work that by simply sharing this article for the Global Moms Relay, you can help to support.
All photos courtesy of UNICEF Ethiopia/2015/Mersha.
You share, they give: Each time you ‘like’ or share this post via the social media icons on this post or comment below, Johnson & Johnson will donate $1 (per action) up to $300,000, to improve the health and wellbeing of moms and kids worldwide through MAMA, Shot@Life, U.S. Fund for UNICEF and Girl Up. $1 means one healthy birth in Ethiopia through UNICEF.
You can also use the Donate A Photo* app and Johnson & Johnson will donate $1 when you upload a photo for Girl Up or UNICEF, up to $100,000. You can help make a difference in seconds with the click of your mouse or snap of your smart phone.
Share this post with the hashtag #GlobalMoms, and visit GlobalMomsRelay.org to learn more. The United Nations Foundation, Johnson & Johnson, BabyCenter and The Huffington Post created the Global Moms Relay with a goal of improving the lives of women and children around the globe.
* via the Donate A Photo app for iOS and Android. Johnson & Johnson has curated a list of trusted causes, and you can donate a photo to one cause, once a day. Each cause will appear in the app until it reaches its goal, or the donation period ends. If the goal isn’t reached, the cause will still get a minimum donation.
Editor’s Note: Johnson & Johnson is a sponsor of The Huffington Post’s Global Motherhood section.

Ethiopia: One dead, 58 in severe conditions as a result of a Cholera outbreak