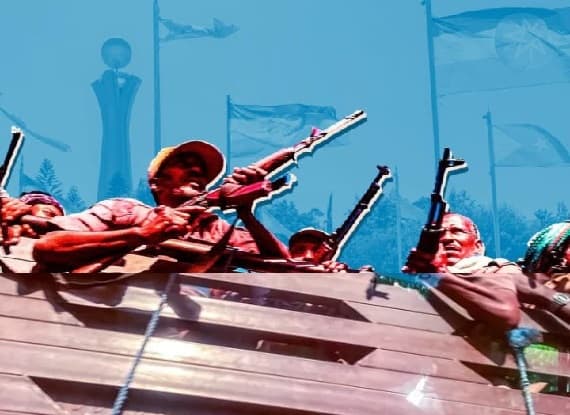 A common national consensus as to what is to follow the silencing of the guns and the defeat of the TPLF does not appear to be in place. Various nationals express grave concerns regarding the perpetuation of the conflict and the misunderstandings lingering on beyond the current focus on the law enforcement operation in Tigray.  We all need to soberly consider a possible way out of the current crisis and work towards the creation of a national consensus that will address once and for all the root causes of the conflict and the ongoing displacements in Tigray and beyond.

Issues currently under discussion in various median include the suggestion that the law enforcement operation should result in the “liberation” of Amhara regions incorporated by the TPLF into Tigray regional state. Such a request, when put within the national perspective,  begs the question as to how to entertain similar claims between the Amhara and Oromia, Afar and Somali, Oromia and Somali,  Benishangul Gumuz and Amhara, Gambella and Beneshangul,  Oromiya and the SNNPR, Sidama and the SNNPR and various territorial disputs within the SNNPR ? This irretraceable conflict can only be redressed by revisiting the concepts that created the artificial boundaries and disputes in the first place.

We recall that superficial adoption of Marxist-Leninist slogans and concepts have been used by the TPLF to facilitate their rule in Ethiopia and draw national and ethnic “national state” boundaries. The setting up of the so-called regional boundaries and state governance structures have resulted in territorial disputes, conflict and forced displacements. The lead role of the TPLF in the establishment of the conflicting situation was designed primarily to benefit its party core membership designed to minimize opposition to it.

The fallacy of the existence of a territorially defined national region, with demarked boundaries, such as the Amhara, Somali, Afar, Sidama, Oromia etc.., not only negates history and realities on the ground, but continues to fuel conflicts based on ethnic territorial claim and disputes.

Removal of the TPLF and replacing it in Tigray with either a caretaker transitional governance mechanism or the Prosperity Party branch functioning within the former EPRDF constitutional, territorial and administrative confines cannot be a long term solution nor will it lead to a common national affliction. Arresting the top leadership or the old guard “junta” of the party does not necessarily mean the end of the TPLF movement or its ideology.

The suggestion being floated to revamp law enforcement operations in parts of Oromiya, Afar, Benishangul Gumuz and parts of the SNNPR to bring to justice TPLF allied  proxy  actors terrorizing the population and involved in ethnic cleansing might be necessary but will not ultimately address the root cause of the problem.

The proper management of the significant internal and external displacement taking place is yet another challenge worthy of a more focused consideration. The refugee outflow from Tigray to the Sudan and the IDP situation inside the country call for distinct and tailored response arrangements and mechanisms.

The unfolding refugee situation is worrisome as a lot of work needs to be done to urgently create a conducive environment for the voluntary return of refugees. The simplistic statements, being uttered by some officials, to bring back refugees to safe areas is an under estimation of the problem. Some even suggest bringing back refugees and placing them in temporary holding centers before they go back to their places of origin. This could be well meaning but is totally misplaced.

The refugee situation is very concerning as, if not tactfully handled, it could create a protracted situation creating a fertile ground for the recruitment and breeding of TPLF remnants and other opposition groups.  Such groups could even be initiated, funded and supported by those who wish to see a weak Ethiopia. Proactive initiatives need to be undertaken to ensure proper screening of refugee arrivals as well as putting in place sufficient monitoring mechanisms to safe guard the civilian character             and nature of refugee camps.

It is in Sudan’s self-interest to have the refugee card up its sleeve in order to strengthen its bargaining hands on the ongoing GERD trilateral deliberations and other issues with Ethiopia. The Sudanese government’s publicity of the refugee inflow, its rush to launch an international appeal for assistance and its eagerness to move arrivals some 80 kilometers inland from the border indicates its intent. The reactivation of the 1991/2 abandoned EPLF/TPLF run and “refugee” local settlements is of concern as history could repeat itself.   A well thought out strategy that takes into account the interests of all stakeholders and applicable international instruments needs to be urgently designed.

The Search for Clarity

The activist led agitation targeting the youth and relaying on social media to sustain ethnic tension, displacement and polarization has to be addressed in a systematic way.

The Government continues to echo slogans of prosperity and renaissance as being the option which somehow would take the country out of the current impasse. However, tension between national interests and regional ethnic interests, coupled with short term regional coalition formations against one or another grouping continues to undermine the fundamental principles of the Prosperity Party. The OROMARA consultations, excluding others, is but a manifestation of that shortcoming. Short term alliances of linguistic groupings to overcome a perceived threat by another ethnic group does not constitute a strategic approach to resolve the problem facing the nation.

Discussions within the Prosperity Party, and amongst its supports, vacillate between centralization and region centered federalism putting into question the current power relationship and balance within the ruling party.  The renaming of the EPRDF as the Prosperity Party (PP) in its self cannot radically change the situation. The prevailing contradictions and lack of coherence within the PP appear to be irreversible and detrimental to the maintenance of the current status quo which also remains influx.

Undertaking cosmetic repairs cannot fix cracks that have appeared. Claims that the party is clearing itself of remnants of the EPRDF old guard without articulating the actual policy shift to be implemented by the new recruits does not build confidence in the change process.  The leadership should consider examining the validity of some of the constitutional provisions inherited from the TPLF/EPRDF and affirm its willingness to undertake corrective revisions in consultation with the opposition and civil society, religious leaders, activists, academics and professional association.

Contradictory claims regarding the content of the  reforms within the existing federal political establishment, and its regional administration, is further complicated by some opposition parties call for a transitional government to be set up to draw a new constitution. Some advocate for a transitional government as a pre requisite for a broad based consultative process. The end remains reaching a consensus on a democratic Ethiopia void of regional ethnic identification.

However, even though various groups and individuals call for a platform of dialogue and exchange of ideas regarding the best option for the country, none appear to have developed a coherent political, social and economic programme on how it was to be achieved and what the expected outcome is to be.  Some form of benevolent authorities rule supported by the military is discussed in some circles as being yet another option. That option might be a nonstarter and a move to involve the military in the administration of the country would indeed be tragic.

Accepting to examine solutions not boxed in by flaws enshrined in the “national question” debate of past years and Amhara expansion and assimilationist dogma is long overdue.  By the same token, equating the Tigray people with any perceived or actual wrong doing of the TPLF would not be factual or productive to the search for lasting solution.

There is no political alternative to an all-inclusive democratic Ethiopia, owned by all its citizens, as the only way out of the current impasse. The Government should loudly and clearly spell out that the country cannot continue on the current ethnocentric trajectory. The leadership has to issue an alternative clear and coherent vision of the future governance principles, objectives as well as management structure it would work to achieve.   The top leadership of Ethiopia should take advantage of the current situation and take “the bull by the horns” and issue a vision statement stipulating that the current constitution will be revised. The revision should be gradual and phased with the objective of finally ensuring free movement and residency of all citizens enjoying the same political and economic rights and privileges throughout Ethiopia.

The Ethiopian Constitution, and rules governing sub regional levels, has to ensure respect for all fundamental human rights of its citizens irrespective of their ethnic, race, belief, gender, sexual preference or political thought or creed. Accountability and the supremacy of the rule of law have to be ensured. Citizens should enjoy the same rights and privileges as citizens and not as members of a specific national, ethnic or linguistic grouping. Two levels of citizenship and any sub regional body should be avoided.

Political parties should be encouraged and supported to have a national focus encouraging citizens to engage and participate in order to prosper as citizens of Ethiopia. Political discussions should be veered away from the language of ethnic identity and ethnic group benefits.

The right of each language group and nationalities to develop and practice every aspect of their cultural heritage within a democratic state has to be ensured.  A dogmatic and solely language based application of ethnic boundaries in the drawing of administrative units should be avoided. A more rational Federal Administrative structure should be redesigned for the new rejuvenated Ethiopia.

A fair representation of all linguistic groups has to be maintained particularly in the Armed Forces, Security establishments and the Civil Service.  The command and control encumbrances in the Armed Forces and security establishments have to reflect the national demographic reality. Merit and professionalism should be the guiding principle in the selection and retention of encumbers and leaders.

Opposition groups and individuals have to be magnanimous enough to accept that their call for the immediate removal of the Government is premature and irresponsible. I do not see any national opposition party or group posed to move into Addis Ababa and take over power today. I do not also see an all-inclusive national party winning an immediate nationwide election to unseat the regime and put in place an alternative government soon.

Following the vision statement sited above, the primary task of the Government would be organizing an all-inclusive dialogue around its vision, i.e. the ultimate reassertion of an Ethiopian common citizenship and political dispensation.

The dialogue has to be all inclusive of citizens and without any precondition. Engagement and consultation with the public at the various stages of the process would be indispensable.  The current Constitution should be revised or altered based on the final consensus to be reached.  Such an undertaking has to be time bound and needs the endorsement and support of key international partners. Such a bold move, coupled with proper management of the displacement epidemic, would also deny those bent on destabilizing Ethiopia a pool of potential recruits to further their sinister objectives.

The final outcome has to be a genuinely meaningful democratic process where   citizens have ownership in determining governance and leadership of the country through majority representative rule.  Ethiopians should have total confidence in the selection of the new national leadership of a multi-party Democratic country void of narrow ethnic or regional impositions.