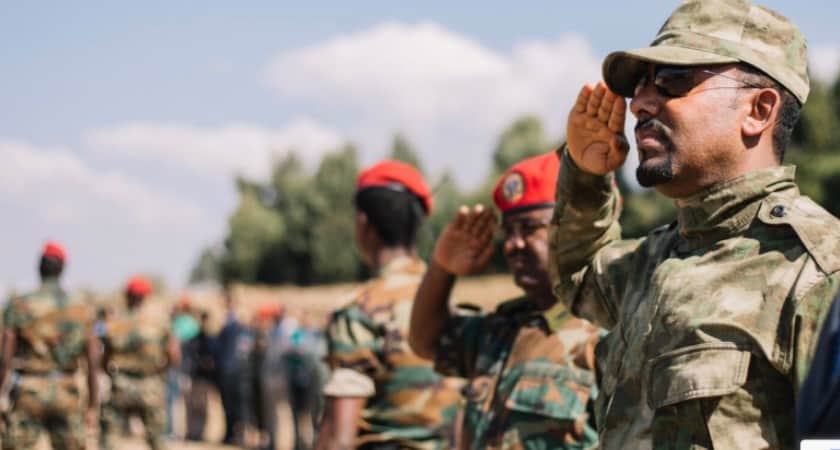 Violence is escalating in Ethiopia, where a leader once lauded internationally for his reform agenda and forging peace with neighboring Eritrea now faces the specter of civil war.

This month, long-simmering tensions between Prime Minister Abiy Ahmed’s government in Addis Ababa and leaders from the country’s northern Tigray region have spilled into the open. Tigrayan forces and the national military have clashed, and Amnesty International recorded evidence of an alleged massacre of civilians. Hundreds of people have been reported dead. Tens of thousands have fled as refugees to neighboring Sudan

The United Nations human rights office has warned the situation “risks spiraling out of control.” Civilians who fled the fighting and spoke to The Washington Post from Sudan described terrifying scenes of mass violence. One said government troops were “killing people madly.”

On Thursday, 17 U.S. senators sent a letter to Secretary of State Mike Pompeo asking him to “engage directly” with Abiy and “continue pressing all parties to agree to an immediate cease-fire, the de-escalation of tensions, protection of civilians, humanitarian access, and respect for international humanitarian law.”

What set off the conflict?

In early November, Abiy said that Tigrayans had attacked a national military base. He responded by sending troops to the region, which is governed by the Tigray People’s Liberation Front (TPLF) — a political party that once held major influence across the country. In a televised broadcast days later, Abiy announced that the Ethiopian military had bombed Tigray, destroying weaponry near the regional capital of Mekele.

Several days later, hundreds of people may have been killed in a knife-and-machete attack in the town of Mai-Kadra, according to Amnesty International. It was not immediately clear who was responsible.

“We have confirmed the massacre of a very large number of civilians, who appear to have been day laborers in no way involved in the ongoing military offensive,” Deprose Muchena, the human rights watchdog’s East and Southern Africa director, said in a statement.

The group demanded both sides prioritize civilian safety and called on the government to restore communication to the region, which was reportedly cut off in early November.

Tigrayan regional president Debretsion Gebremichael has alleged that Eritrea sent troops and tanks over the border into Tigray to support the Ethiopian government, telling Reuters the rockets were retaliation. Reuters reported that he did not provide evidence to back up his allegations.

The escalation in hostilities has spurred a mass exodus from parts of the region, with tens of thousands of people fleeing over the border into Sudan.

Abiy wrote on social media Monday that the Ethiopian government is prepared to “to receive and reintegrate our fellow Ethiopians fleeing to neighboring countries.” The next day, he said Ethiopian forces will move ahead with what he described as “the final and crucial” phase of their military operation.

On Thursday, the Ethiopian military chief accused World Health Organization Director-General Tedros Adhanom Ghebreyesus, who previously served as a minister in Ethiopia’s government as a member of the TPLF, a criminal, claiming he is helping to arm the Tigrayan fighters. He did not offer evidence of his claims.

“I am on only one side and that is the side of peace,” Tedros said in a statement Thursday.

Why is this happening now?

Tensions had long been brewing between Abiy and leaders from the TPLF, which has seen its national authority dwindle since Abiy took office in 2018.

As prime minister, Abiy dismantled the long-standing ruling coalition, led for years by the TPLF, and created the new Prosperity Party.

Jason Mosley, a research associate at Oxford University’s African Studies Center, said the move essentially “created a situation where [the TPLF] either had to join the Prosperity Party and submit to his program, or not, in which case they were out.”

Eritrea, an extremely closed-off country, was once a part of Ethiopia but gained independence in 1993 after a 30-year struggle. From 1998 to 2000, Ethiopia and Eritrea fought in a war that left tens of thousands dead. The two countries remained enemies for the next 18 years.

When Abiy’s government postponed this year’s elections, citing coronavirus concerns, Tigrayan officials opposed the move and held their election anyway. Abiy refused to recognize results from the September vote, adding to hostilities. The postponement gave both sides grounds to discount the other. “They can both declare each other illegitimate,” said Payton Knopf, a senior adviser at the U.S. Institute of Peace.

In October, lawmakers approved a plan to withhold federal funding for Tigray, further inflaming the tensions.

What does this mean for regional security?

If conflict escalates further, it could destabilize the region and lead to mass displacement, Knopf said.

Neighboring Sudan, where more than 25,000 people have already fled, is going through a fragile transition and an economic crisis. In a worst-case scenario, Ethiopia could now experience “what could be one of the largest refugee exoduses we’ve ever seen,” Knopf said.

The Tigrayans’ decision to launch missiles at Eritrea also added an international element to the conflict.

Mosley said he doesn’t believe the Eritrean government will want to enter the conflict directly. “But if the Eritrean military gets involved,” he said, “it’s really bad for Abiy because it makes him look like he needs the Eritreans to control his own territory.”

Around 96,000 Eritrean refugees live in Tigray, sparking fears they could be displaced again.

How is the international community responding?

This week, Babar Baloch, a spokesman for the United Nations High Commissioner for Refugees, said the agency now views the situation as a “full-scale humanitarian crisis.”

In statements this month, the State Department has also urged de-escalation of the crisis and called for communication to be restored in the region.

Seventeen U.S. senators signed a letter sent to Pompeo on Thursday urging that the U.S. get involved more directly in efforts to restore peace to the region. The letter cited major concerns over the humanitarian crisis and escalating violence, noting that in addition to the many Ethiopians displaced in recent days, the conflict also “poses a direct threat to hundreds of American citizens, journalists, and aid workers in the Tigray region and surrounding areas.”

Sen. Chris Van Hollen (D-Md.), who authored the letter, said in a phone call with The Washington Post that he has “been concerned about the lack of engagement at the highest levels especially with respect to Secretary Pompeo.”

“This is not about pointing fingers, this is about stopping a growing humanitarian crisis,” he said. “The U.S. has strong interests in Ethiopia and the region, and it makes sense for a secretary of state to play more of a leadership role.”

“We’ve seen a couple of tweets but that’s not a substitute for personal diplomacy,” Van Hollen added.

Foreign countries are also pushing Abiy to pursue peace talks, Reuters reported Monday. Officials in neighboring countries, including Uganda and Kenya, continue to call for dialogue to resolve the conflict.

Siobhán O’Grady writes about foreign affairs for The Washington Post. She previously freelanced across Africa and worked as a staff writer at Foreign Policy magazine. Since joining The Post, she has reported from Cameroon and Afghanistan.