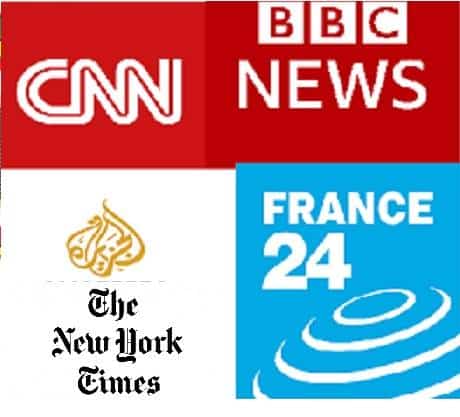 Some western media outlets have intensified false propaganda against Ethiopia over the past few weeks in an attempt to enhance their hidden agenda of destabilizing the country, a media monitoring survey indicated.

This is part of the ongoing Western pressure exerted on Ethiopia in order to force the country bow for external interest.

Some media houses are bent on disseminating gloomy picture, false narrative and creating hysteria by their latest offensive propaganda machine through their media outlets.

The motive of these western media has become much clearer since the conflict in the Tigray region began.

The coordinated media campaign at the command center in Washington has intensified over the past three days. The western media so-called print and electronic have used their page covers and airtimes in a very unusual way about the current situation in Ethiopia.

Media monitoring carried out over the past three days by Selam Mulegeta, a journalist, most of the contents of western media that have reported in English languages about situation in Ethiopia are shaped and framed depicting the position of the West and their political goals in the country.

According to him the anti-Ethiopian information war was led by five major international media outlets namely the CNN, BBC, Al-Jazeera, France 24 and Associated Press. These media outlets have been reporting extensively on Ethiopia over the past three days.

Based on information gathered from the media websites, these five media outlets have reported a total of 72 news on the current situation in Ethiopia since Wednesday afternoon.

The number of news reports on Ethiopia by a specific media institution looks like as the following:

Egyptian media outlets, particularly Al-Ahram and Daily News Egypt, are reporting an average of five reports each day; by exaggerating the terrorist forces with a view to intensifying the psychological warfare. The rest of the world’s major Western media outlets are spreading the same agenda, even if small in number.

The reports are presented in the form of news, news analysis, and discussions, supported by animation, photos, and graphics. The most notable of these numbers are TV broadcasts with broad airtime (up to 35 minutes).

The Media outlets have been spreading fake information and false narrative about Ethiopia.

Most dominantly their contents portray the terrorist TPLF as victim and the central government is about to fall. They have also been attempting to create mistrust among government leaders and the military as well as terrorizing the foreign communities based in Addis Ababa to leave the country.

The media contents also aim at intensifying the unjust pressure on the government of Ethiopia.

In general the contents are all about creating insecurity in Ethiopia and strong psychological instability among the people of the country.

These media are working to control the news market by transmitting such contents as part of the coordinated campaign against Ethiopia in order to achieve their interest by tarnishing the reality in Ethiopia.

Now, it is time to fight against such unfounded, baseless and false propaganda being disseminated by some western media against the government of Ethiopia and people. The only way to counter this massive media attack on Ethiopia is by actively sharing bona fide information and news and debunking the fake news and fabricated information.

These media outlets are out there to serve the political interests of their respective countries and governments and try to use normal newscast as an instrument for exerting unfounded pressure on less developed countries more particularly in Africa.