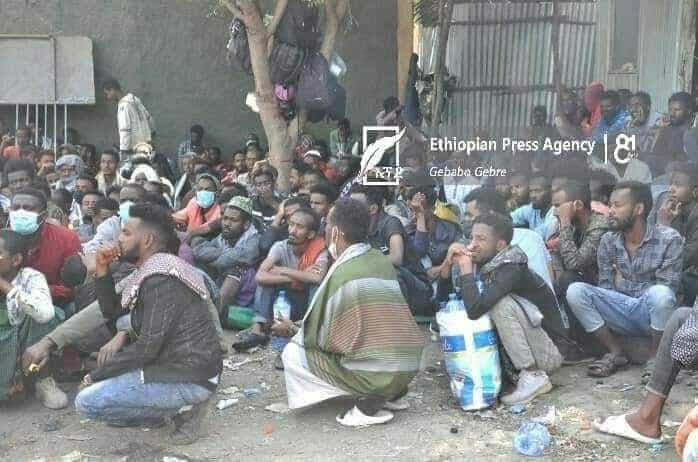 The social psychology of terrorist TPLF is based on barbarism, war, hatred and egocentric lust for power and hegemony. This is what all Ethiopians including citizens in Tigray have witnessed for the last 49 years of the group’s existence. For over a year now, the terrorist media has never broadcast anything new except the hatred and lies of the brutal group.

Terrorist TPLF has already started a new round of war on Afar in a bid to block the only inlet to relief supplies to Tigray and is also reportedly getting ready to attack Amhara region which is now hosting thousands of citizens from Tigray, escaping from the tyrannical rule of terrorist TPLF. Several months back, terrorist TPLF massacred more than 600 innocent citizens in Kobo town in Norther Wollo Zone but today, the people in the town are hosting the desperate Tigryans who are in dire need of food, shelter and medicaments that terrorist TPLF deliberately failed to provide them by blocking the main route to food transport to Tigray.

In fact, the Federal Government of Ethiopia has been playing constructive roles in facilitating the smooth movement of humanitarian trucks along the Afar route to address the humanitarian needs of the Tigray region.

If one dares to put question to Tedros: who has destroyed and looted the health facilities that were built by the government and in part by the contribution from the Northern Command of the ENDF? What has terrorist TPLF done to address the other socioeconomic problems of the population in the region except for forcefully recruiting their children for war and asking their parents to contribute money and food?

In total disregard to his global health mandate, the WHO Director General is busy misinforming the world about the whole situation in Tigray. The truth is on the 16th of March UNICEF Ethiopia said medical supplies including ready-to-use therapeutic foods, emergency drugs and health kits arrived in Mekelle, Tigray region’s capital city.

The supplies have already been distributed to 40 health facilities in areas accessible throughout the region including Ayder Hospital, according to the UN agency.

About 100,000 children and their families have benefited, it said, adding the supplies also being used to treat 3,333 severely malnourished children.

UNICEF is among the aid agencies that are providing essential medical supplies to the Tigray region.

The National Disaster and Risk Management Commissioner also said, on 17 March, 2022, that twenty trucks have started carrying humanitarian assistance including food and nonfood items to Tigray and would be doubled soon on a daily basis.

However, the Director General of the WHO lies before the entire world in a bid to serve as a spokesperson for terrorist TPLF in its attempts to spread false information to the rest of the world.

Tedros in his press briefing was also dead silent about the influx of internally displaced people(IDPs) from Tigray and the pressure that is being extorted on Amhara Region that is in dire need of food and medical assistance due to the invasion by terrorist TPLF.

As a global leader, Tedros should have voiced the same concern that he voiced for Tigray for the needy population in Amhara and region. A couple of days back, the Amhara Regional Government reported that 11.6 million persons in the region are in urgent need of food and medical supplies while 263,000 were displaced from their homes all because terrorist TPLF invaded the region in its fascistic desire and irredentist plan to form Greater Tigray by destroying the statehood of Ethiopia.

Disregarding the plight of the Amhara people who are hosting IDPs from Tigray is a gross miscarriage of professional ethics on the part of Dr. Tedros and his lies are simply absurd and shameful.

Terrorist TPLF is now preparing for another round of war on the people of Ethiopia exhibiting that this organization cannot exist outside of war because in war it avoids its regional responsibilities and would be engaged in blame shifting propaganda.

The citizens in Tigray are facing all this agony as a result of which they are fleeing to Amhara Region to save their lives, exposing the heinous character of the terrorist leaders. The most interesting part of this is that still few international actors are trying to save the terrorist TPLF who is in a sinking ship.

Terrorist TPLF is already busy dehumanizing the people under its administration and leading the region to a stone age. Despite the government’s patience, the terrorist group is mobilizing all it forces to destabilize the entire country from all fronts. However, their propaganda war is losing ground as the world is trying to understand the reality on the ground.