Churches belonging to the Ethiopian Orthodox Tewahedo Church (EOTC) are being burned to the ground throughout Ethiopia — one of the world’s most religious countries, where about 98% of Ethiopians claim a religious affiliation. Church members have also reportedly been killed while trying to protect their churches.

These incidents of arson and murder come at a time when tensions between the country’s ethnic groups — including Oromo, Amhara and Tigrayan — are already high. Since the end of 2015, Oromo people have protested against land encroachment by the government, while the Amhara people have protested over regional integrity threats by their Tigrayan neighbors.

The government and EOTC leaders met recently in a series of hurried meetings to discuss the uptick in threats to the EOTC in the face of huge protests planned in the capital, Addis Ababa, on Sept. 15, 2019, to speak out against the attacks. Authorities did not permit demonstrations in the capital but protesters turned out in massive numbers in Gondar, and other cities. 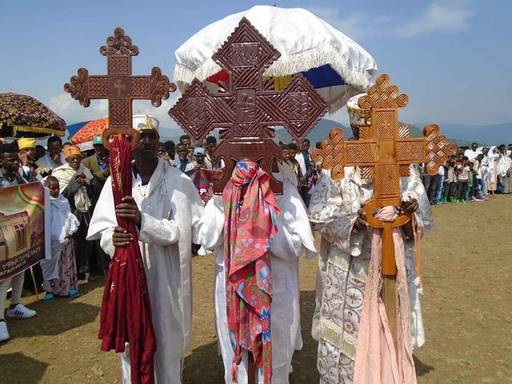 Church members gathered on Sunday, September 15, 2019, in Gondar, Ethiopia, to protest against the uptick in church attacks throughout Ethiopia.

Since July 2018, about 30 churches have been attacked, mainly in eastern and southern Ethiopia, with more than half of them burned to the ground, according to the Amhara Professionals Union (APU), a United States-based diaspora organization that has attempted to track events.

“There have been at least 15 churches that were attacked, three of which were completely burned down,” says Nathan Johnson, Africa regional manager for International Christian Concern, a US-based nongovernmental organization that monitors human rights of Christians and religious minorities around the world. “I have only confirmed two cases in which priests have been killed in Ethiopia this year. It is likely that this number is higher, though, as there are major tensions in the country.”

The attacks, occurring across a wide geographic spread, have gone largely under-investigated and under-reported, leaving some church members to feel that the Ethiopian government has turned a blind eye to the uptick in church attacks over the last year.

The EOTC — with deep historical influence — has long had a strained relationship with Ethiopia’s secular rulers. Former administrations viewed the conservative EOTC as a detriment to progress as they shifted from traditional values to a market economy.

“The government’s constant narrative [has] depicted the church as an organ of repression for previous regimes. … Local and federal authorities, for the most part, ignored the pleas of the church leaders for protection.”

“The government’s constant narrative [has] depicted the church as an organ of repression for previous regimes,” says Alemayhu Desta, a deacon at Holy Trinity Ethiopian Orthodox Church in Dallas, Texas. “Local and federal authorities, for the most part, ignored the pleas of the church leaders for protection. Even the recent pleas of the Holy Synod, the highest ecclesiastical authority of the church, to the government for immediate action to protect church property and the lives of Orthodox Christians was ignored.”

Ethiopia is undergoing a period of protracted tumult. During the first half of 2018, Ethiopia’s number of internally displaced people grew to 1.4 million — clashes between Oromo and Somali in both Oromia and Somali regions — exceeding IDP numbers in Syria. By the end of last year, after further clashes between the Oromo and Gedeo in Oromia’s West Guji zone, the IDP population had mushroomed to nearly 2.4 million and remains close to that figure.

“One thing [these] reports of attacks on Ethiopian Orthodox churches and worshippers show is the different types of conflict occurring in Ethiopia over the past year or so.”

“One thing [these] reports of attacks on Ethiopian Orthodox churches and worshippers show is the different types of conflict occurring in Ethiopia over the past year or so,” says William Davison, the International Crisis Group’s senior analyst for Ethiopia.

After becoming prime minister in early 2018, Abiy Ahmed initially drew great praise for shaking up an authoritarian political order, releasing political prisoners and enacting reforms that increased civil liberties and press freedom. His background from a mixed Christian-Muslim, Oromo-Amhara family was seen as another positive set against former Tigrayan dominance in the government.

But now some commentators suggest Abiy moved too fast, especially for a country whose political system is based on ethnic federalism, to maintain harmony across the country’s nine regions that house more than 80 different ethnic groups.

Related: Hundreds of thousands of displaced Ethiopians are caught between ethnic violence and shadowy politics

The July burning of churches in Sidama occurred during ongoing unrest over a movement for the area to secede from the Southern Nations, Nationalities and People’s Region State (SNNPR) to become its own independent federal state.

Increasing frictions stemming from identity politics could well be playing a part in the church attacks, as the EOTC is commonly identified as an Amharic institution. Throughout Ethiopia’s history, this has generated suspicions among some non-Amhara Ethiopians that the EOTC is used as a proxy to further the Amhara political agenda.

Hence, Davison explains, the attacks could “emanate from long-standing grievances and political narratives about supposedly privileged Amharic-speaking highland ‘settlers’ who are perceived to be the descendants of beneficiaries of an imperial system that, for example, strongly promoted the Amharic language, suppressed local identities, had Orthodox Christianity as the state religion, and where tenant farmers were largely at the mercy of landlords.”

Recently, the Oromo Orthodox demanded a breakaway administrative hub for the EOTC to better represent their interests.

“Ethiopia cannot afford a religious conflict at a time when its very survival is [already in] question.”

“Ethiopia cannot afford a religious conflict at a time when its very survival is [already in] question,” says Tewodrose Tirfe, with the Amhara Association of America, another United States-based organization representing the diaspora’s Amhara ethnic group.

“Those targeted in the church burnings have been mainly Amharas. This will inflame ethnic tensions already present in the country.”

About half of Ethiopia’s 105 million population follow the EOTC, the largest of the Oriental Orthodox Christian churches. Muslims make up around 35% of the population — many claim this figure is higher — with Protestants, Catholics and adherents to Indigenous tribal religions making up the rest.

Previously, such percentages have been relatively moot, with modern-day Christians and Muslims living together in harmony. Intermarriage is common, while both sides recognize and celebrate each other’s religious holidays.

But that doesn’t negate pressures and competition on a larger scale — attacks on Christians have occurred regularly since the 1990s, with a spate of attacks in 2011 — hence concerns that the increase in church burnings since 2018, especially those that occurred in the predominantly Muslim Somali region — could indicate the influence of Islamic extremism. 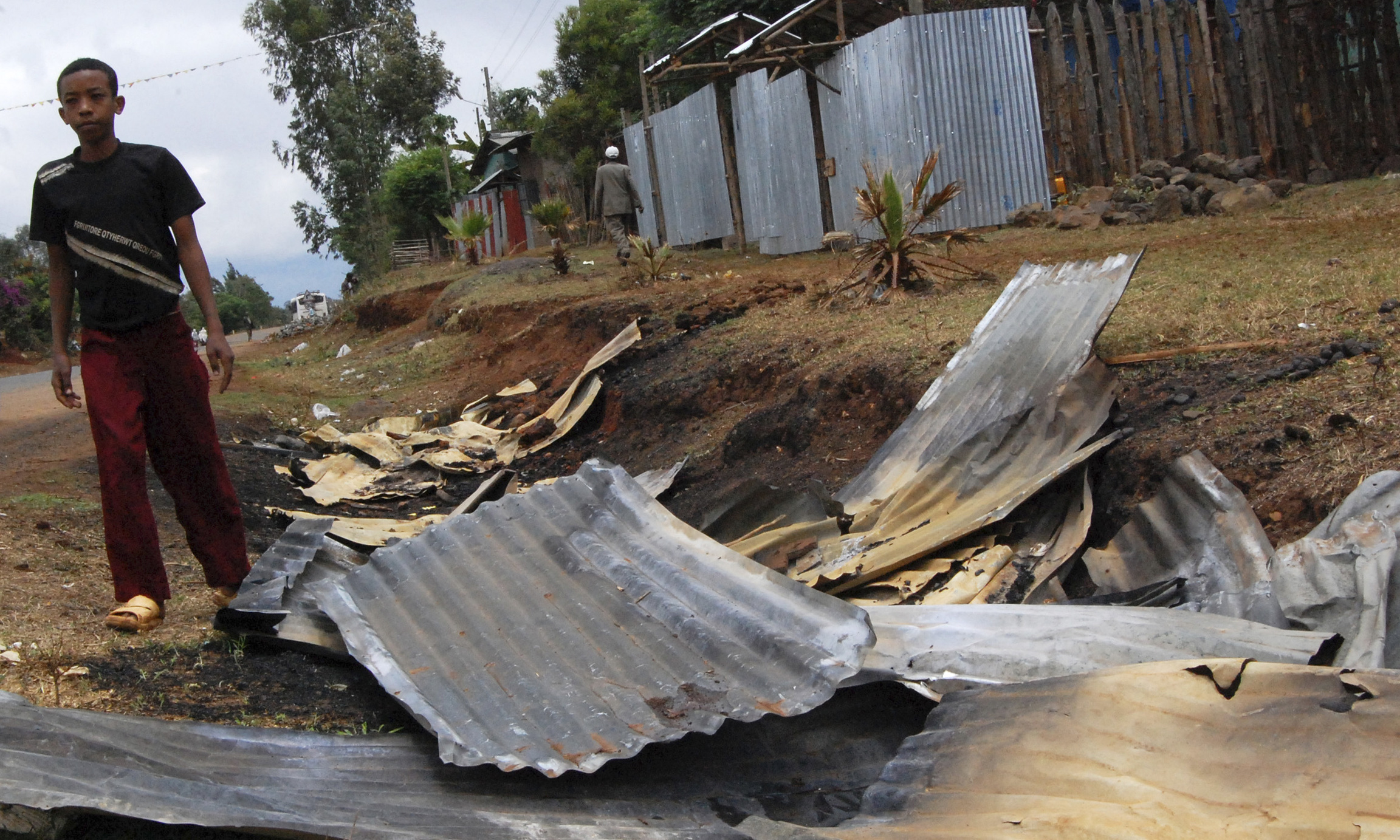 A boy walks past burnt corrugated iron sheets that once covered a church in Asendabo, Ethiopia, west of the capital, Addis Ababa, March 16, 2011. More than 4,000 members of local Protestant denominations were displaced by a rare bout of religious violence when Muslims staged a week of attacks in Asendabo. A total of 69 churches, a Bible school and an office were eventually burned to the ground, and one Christian was killed. Picture taken March 16, 2011.

“Islamic extremism has been growing in Ethiopia and has been a concern for many analysts in the region,” Tirfe says. “Money from the Gulf region has been pouring into the country building mosques, [Islamic] schools, and introducing the Wahabi form of Islam to Ethiopian Muslims since the early 2000s.”

Wahhabism, a more strict and conservative Islamic doctrine and religious movement, backed by Saudi Arabia and the United Arab Emirates, has made inroads in Ethiopia and the wider Horn of Africa region in the past few years.

But others note it’s important not to overemphasize the potential influence of Islamic extremism in a highly complex situation.

“Orthodox Christian churches were not the only properties targeted, and nor were Orthodox Christians the only groups who suffered,” Davison says. “Instead, government buildings, hotels and other commercial properties have also been attacked, as were numerous ethnicities, and presumably followers of different faiths. The targeting of Orthodox churches may therefore not necessarily reflect a dangerous rise in religious sectarianism.”

Whether church attacks have been driven more by religious or ethnic differences, or by an admixture of both, the immediate consequences are unequivocal, and the wider implications carry significant risks for Ethiopia’s future peace and stability.

“There is a feeling of siege among many followers of the Ethiopian Orthodox Church. … The burning of churches could lead to wider distrust within society and could be a time bomb.”