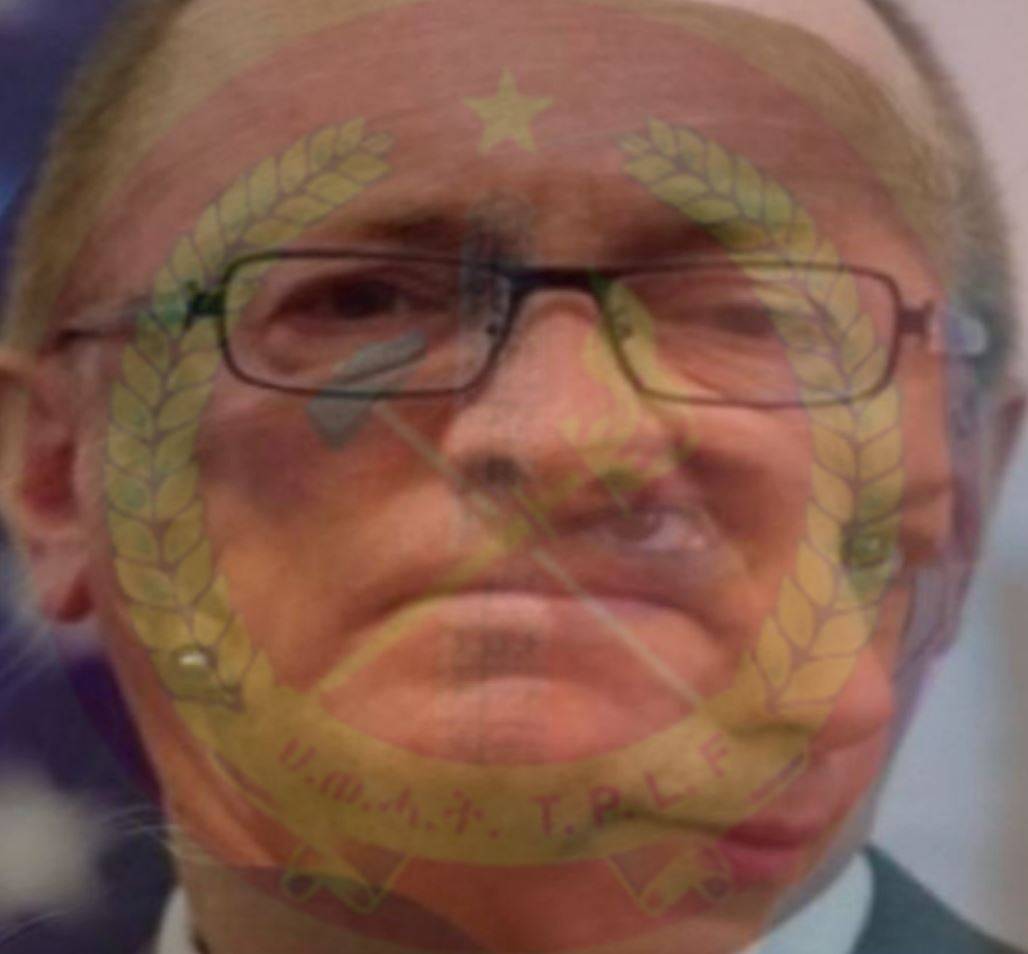 What the hell is Jeffrey TPLFeltman doing in Ethiopia now?

Every time I turn around, Jeffrey TPLFeltman shows his face in Ethiopia or is lurking, slithering, skulking and slinking all over the Horn of Africa.

He keeps showing up in Ethiopia like a bad penny.

Old Jeff ain’t fooling me! I got his number long before he became “Special Envoy of the Horn of Africa.”

I got Jeff’s number when he showered the late murderous TPLF thug Meles Zenawi with lavish praises.

In September 2012, at Meles’ funeral, Feltman laid on thick:

Prime Minister Meles was an impressive statesman who dedicated many decades to serving his country. He was a skilled mediator. He will be remembered for his exceptional leadership. He dedicated tremendous energy to advancing Ethiopia’s economic growth and development…”

My remarks that day bypassed entirely the subject of human rights in emphasizing the Meles’ economic legacy. I had no idea that a ceremonial, representational appearance would, nearly a decade later, be fodder for misinformation on social media that the newly appointed U.S. Special Envoy for the Horn of Africa was somehow hopelessly partisan in favor of a man I never actually met. This distortion highlights the strong views that exist on Meles’ legacy on today’s Ethiopia. It is also a reminder that Ethiopia’s social media is, if nothing else, wondrously creative.

What a lying sack!

Feltman in 2012 said he “bypassed entirely the subject of human rights that day.”

But today in 2021, Feltman is in Ethiopia to talk about human rights in Tigray!

Feltman today says he is unfairly accused of being “hopelessly partisan in favor of a man I never actually met.”

Yet in 2012, he lavished praises on a man he never actually met calling him “impressive statesman”, “skilled mediator”, etc.

How can sing such praises about a man he never met?

Old Jeff thinks he can pull one more fast one on Ethiopia’s leadership talking trash about “unfettered humanitarian access”, “negotiated ceasefire”, “sanctions” and the rest of it.

Read Aloud:   Barely Out of Afghanistan, Now America Is Supposed To Save Tigray From Ethiopia and Eritrea?

But Feltman ain’t nothing more than the “The Ugly American” depicted in the 1958 Eugene Burdick and William Lederer novel.

That book begins with Ambassador Sears bemoaning the fact that the people of the fictional country of Sarkhan are “strange little monkeys”.

The fact is Sears is the real monkey. He is completely clueless about Sarkhanese history, politics or society.

Feltman, like Sears, is clueless about the history, politics and culture of Horn countries.

Feltman is the real life “ugly American” special envoy (ambassador) who believes there are “strange little monkeys” in the Horn of Africa he can scare with threats of sanctions, aid cutoff and warfare.

But two weeks ago, Sudan’s strongman and coup leader Gen. Abdel Fattah Abdelrahman al-Burhan made a monkey out of Feltman.

Exhibit A: On the weekend of October 24, 2021, Jeffrey Feltman held “high-stakes diplomatic meetings in Sudan to shore up the country’s shaky transitional government.”

Feltman told everyone, “Don’t worry. I got this!”

However, “only an hour after Feltman’s flight took off, Burhan made his move and ordered the sweeping arrest of civilian leaders, including Hamdok, the prime minister, and dissolved  the transitional government to take power.”

Feltman is the real life ugly American diplomat who believes:

US interference is quite acceptable, but Iranian interference is utterly unacceptable. This might be adequate behavior for the diplomat of a country, but it is hardly the temperament for a senior UN official. It raises doubts about Feltman’s ability to be even-handed in his deliberations as a steward of the world’s political dilemmas. (Italics added.)

Before travelling to the Horn in early May 2021, TPLFeltman was talking trash. “Authoritarian leaders in Ethiopia, Eritrea and Somalia draw closer at the expense of the wider collective.”

“Authoritarian” is a kinder, gentler word for “dictator”.

U.S. officials use “authoritarian” to demonize and ostracize leaders that do not kowtow to them (i.e., “Uncle Sam, massuh…)

Read Aloud:   FEDERALISM AND THE URGENCY OF CO-EXISTENCE

Today, he is in Ethiopia to talk to the same “conniving leaders” hellbent on ripping off the rest of the Horn of Africa.

Is Feltman in Ethiopia for monkey business?

Oh, what a tangled web we weave,
When first we practise to deceive!

Feltman is in Ethiopia to untangle his web of deceit and treachery.

Feltman is in Ethiopia to pull a scam, bamboozle, hoodwink and run amok.

But what did Sleazy Suzie program Feltman to do this time around?

Why does Feltman think he can pull the wool over the eyes of Ethiopia’s leaders?

Why does Feltman think Ethiopians cannot see through his scam as “Special Horn of Africa Envoy”?

HERE ARE THE FACTS!

On November 1, 2021, the U.S. Department of State issued regulations denying licenses   “for exports of defense articles or defense services to or for the armed forces, police, intelligence, or other internal security forces of either Ethiopia or Eritrea.”

On November 2, 2021, “President Biden announced three countries including Ethiopia will be terminated from the AGOA trade preference program as of January 1, 2022…”

On November 2, 2021, the U.S. Embassy in Addis Ababa declared, “The security environment in Ethiopia has deteriorated significantly in the last several days… We strongly suggest that U.S. citizens seriously reconsider travel to Ethiopia and those who are currently in Ethiopia consider making preparations to leave the country.”

On May 19, 2021, the United States Senate passed S. Res. 97 demanding the Ethiopian Government comply with a laundry list of activities that are insulting of Ethiopian sovereignty and denigrate the dignity of Ethiopia as a nation.

Read Aloud:   Who Benefits from Economic Growth in Ethiopia?

On May 23, 2021, the U.S. State Department announced “visa restrictions” on Ethiopia because of the crisis in Tigray.

On August 25, 2021, United States Trade Representative Katherine Tai announced that because of the conflict in Tigray Ethiopia could be kicked out of  the African Growth and Opportunity Act (AGOA) program.

On September 17, 2021, President Joe Biden issued an Executive Order “Imposing Sanctions on Certain Persons With Respect to the Humanitarian and Human Rights Crisis in Ethiopia.”

For months U.S. Secretary of State Antony Blinken has been coordinating with the European Union to apply pressure and sanctions to bring Ethiopia to its knees and negotiate with the TPLF under the guise of “cessation of hostilities.”

For months, the Biden administration has been coordinating with the Western press-titutes including CNN,  New York Times, Bloomberg and others to bombard global public opinion by perpetuating a narrative of condemnation, disinformation, demonization and degradation of Ethiopia.

Pray tell, after the Biden administration has stabbed Ethiopia in the back time and time again, what the hell is Jeffrey Feltman doing in Ethiopia?

Could it be that Feltman thinks he can schmooze Ethiopian leaders by offering them a little somethin’, somethin’ like crumbs, handouts?

Maybe he wants to threaten them with more sanctions?

I know. I know. Plead for safe passage for doomed TPLF leaders listening to the bell tolling for them?

What Feltman, Sleazy Suzie, Biden, Blinken, etc., need to know and understand is a simple fact. Ethiopians are proud people and will never, never kiss their feet or any other part of their body.

The fact remains. Ethiopians always kick ass not kiss it!