Human rights organizations and international media have reported that over 600 Amharas had been killed in the most recent November 2020 ethnic cleansing rampage of the TPLF. Bodies of even more victims are being discovered in various mass graves outside town. A few days before the Mai Kadra incident, the TPLF had massacred over a thousand Amhara members of the Ethiopian defense forces in a surprise night time attack from within their own ranks. That is, TPLF used its ethnic Tigrayan members inside the Ethiopian Defense forces as Trojan horses to stage the treasonous attack. That incident sparked the war with the central government. Sadly, the whereabouts of tens of thousands of Amhara members of the defense force still remains unknown. That includes a large number of female soldiers. Even though the TPLF claimed to have handed close to 800 female Amhara soldiers over to the Red Cross, the Red Cross has denied the claim.

Following their defeat in the fighting with Federal forces, TPLF regional forces and special commandos in Mai Kadra killed unarmed non-Tigrayan civilians. Unarmed innocent civilians, including babies and old people were butchered. The savagery of the killings has repulsed even the war-hardened soldiers that arrived in Mai Kadra as the TPLF forces fled into Sudan. Eyewitnesses reported that tractors were being used to dump the bodies of the victims in mass graves about the town. Most of the killing was committed using sharp objects. The manner of the killing has strengthened the claim by the government that the TPLF was behind most of the nation-wide genocidal crimes against the Amhara over the past two years.  Mai Kadra is part of the historic Amhara province of Gondar that the TPLF annexed by force decades ago following its victory over the Derg Military regime in Ethiopia. At the time, the TPLF had achieved total monopoly of power over the country.

Mai Kadra is a part of the Welkait-Tsegede-Humera-Tselemt region that was incorporated into Tigray. The region mostly known as just Welkait-Tsegede lies east of Sudan and West of the Tekeze River, which forms the historic western-most border of Tigray.  Despite lack of historic evidence of the region ever being part of Tigray over the millennia, the region was annexed to Tigray based on the pretext that the residents spoke Tigrigna. However, the residents speak Amharic, Agaw and Arabic, in addition to Tigrigna. Historically, the residents have interacted widely with the people of Eritrea to their north, hence their facility with the Tigrigna language. On the other hand, the Tekeze and the road-less Simien mountains formed such a formidable barrier, their interaction with Tigray people to the west was minimal. Tigrayan access to Welkait was via a roundabout route through Eritrea. Still, during the emperor’s time, many Tigrayans weathered the long and tortuous journey to work as day laborers in the big Welkait farms.

Ethnic cleansing in Welkait-Tsegede has been widely reported, including by high-ranking former TPLF fighters themselves. 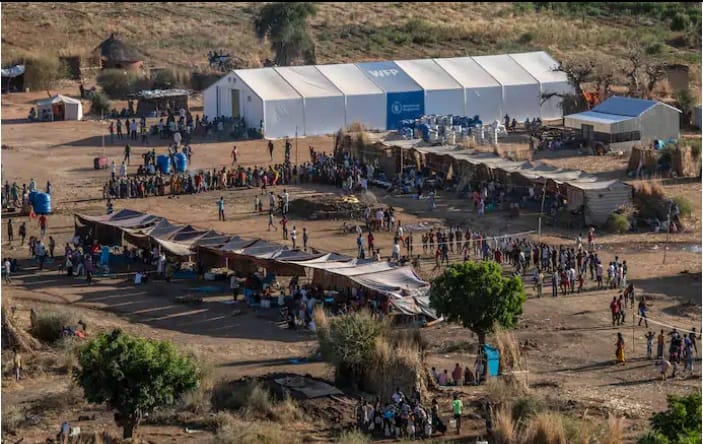 TPLF took several measures to crush the Welkait people who insisted on asserting their Amhara identity and expressing their cultural unity with Gondar and not Tigray. Welkait people opposed TPLF incursion into their territory from the get-go as they believed a liberation front for Tigray has no business on Amhara land. Several books and reports document the mass killings and atrocities against the Amhara in this annexed western region both before annexation and in the decades after annexation into Tigray. Mass graves, burial of live people, underground jails where people were left to rot, people being pushed over cliffs to their death were frequently reported genocidal attacks against the Amhara people.

The violence and atrocity was such that tens of thousands of Amharas have been forcibly displaced out of Welkait. In addition to their internal displacement, tens of thousands of Welkaites live in Sudan, the USA, Australia, Canada, constituting a great majority of the Ethiopian immigrant community in the Ethiopia diaspora.  Those who stayed behind have been forced to suppress their Amhara identity and express themselves as Tigrayans in all social and domestic occasions. Parents are forced to educate their children in Tigrigna only. Those who choose to express Amhara identity in any form, are killed in broad daylight or made to disappear mysteriously. Tigray, both Tigray proper and its annexed territories, is ruled North Korea style and one among three persons is a TPLF informant. Any expression of Amharaness is immediately reported and “corrective” action taken.

Why the demographic engineering?

TPLF worked to strengthen its claim to the fertile Welkait region beyond the mere linguistic one mentioned earlier. With this objective, the TPLF settled tens of thousands of its demobilized soldiers along with their families two decades ago. These former TPLF fighters were fully armed and, thus, strengthened TPLF’s oppressive hand in the annexed region. Moreover, tens of thousands of Tigrayans from Tigray proper were resettled into these annexed Amhara regions. One large group came from Samre in Tigray, namesake of TPLF’s Samre youth organization that participated in the Mai Kadra genocide. These Tigrayan settlers were given land, access to bank credits and agricultural mechanization to exploit the fertile Welkait region. At the outbreak of war, these Tigrayan settlers have been estimated to reach over half a million. One reason the TPLF wanted to annex this region was to provide land-locked Tigray access into the Sudan in case it wants to declare independence – TPLF’s plan B. Plan A is to rule Ethiopia indefinitely and plan B is to declare independence if and when the TPLF becomes unable to have its way in Ethiopian politics. Hence the sticking to the age-old name of Tigray People’s Liberation Front – even after decades of ruling the entire Ethiopian state.

Who are the recent Ethiopian refugees in Sudan?

The great majority of the early arrivals are believed to be the ethnic Tigrayan settlers from the areas immediately bordering Sudan. Thus most of them were Tigrayan residents of the annexed nearby Amhara territories. These group, as opposed to Tigrayans from Tigray proper west of the Tekeze River, are close to the border and had to only walk a few hours to less than a day. That is why most of them were seen carrying house-hold goods and sacks of food. TPLF forces have blocked the roads and forced fleeing Amharas to stay in the city of Mai Kadra. Following the Mai Kadra genocidal massacre, the Tigrayan settler population has fled the area en masse for two reasons. The first one is for fear of retaliation by the advancing Amhara Special Forces. TPLF propaganda as well as their own experience of the persecution of the Amhara by TPLF has made them to unduly expect rough treatment by the Amhara. Secondly, in a bid to get a chance to return to power, the TPLF had intended, all along, to internationalize the conflict and obtain sympathy. As part of this strategy, Tigrayans were encouraged by the TPLF to mass migrate into Sudan. Such TPLF members, along with the thousands of its Digital Woyanne cyber militia, were used to sway international opinion by issuing false claims to mainstream media networks as well as over social media.

Among the early arrivals in Sudan are also to be found a small percentage of Welkaites (Amharas) who had fled to the bushes when fighting broke out. Some of these people have expressed worries to their families as they found themselves in the same refugee camps with the Mai Kadra buthcers. One can imagine the state of psychological terror they must be in. It would be a humane move to either separate these refugees from their attackers, or, better still, facilitate their return home.

The presence of such criminals in the camps is also a potential danger to the other refugees and attempts should be made to identify and bring them to justice.