Lalibela famed for its 12th-century rock-hewn churches is known as a holy site for millions of Orthodox Christians.

The development came as a senior Amhara official said the rebels, known as the Tigray People’s Liberation Front (TPLF), were pushing “deep” into Amhara territory and hinted at possible retaliation.

“I believe now, enough is enough. Because the TPLF is no more in Tigray. TPLF is moving deep into Amhara territories,” said Amhara deputy governor Fanta Mandefro, adding that “We need to defend our people.”

Tigray has been wracked by fighting since last November. Nowadays, the fighting is spreading into Amhara and Afar, another region bordering Tigray.

The town fell without a fight, multiple residents in the town said on Thursday.

“They came in the afternoon, and there was not any fighting. There were no security forces around. The TPLF forces are in the town now,” one resident said.

“Most of the people are leaving the town to the remote areas,” a third resident said, adding that he was hiding in his home with his family. 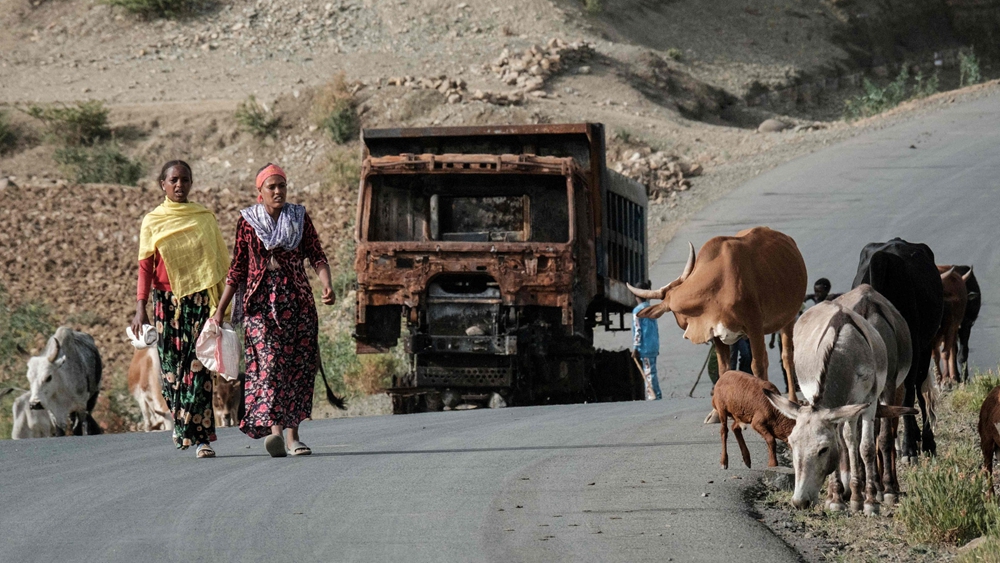 Women walk in front of a burnt truck near Dansa, southwest of Mekele in Tigray region, Ethiopia, June 20, 2021.

The Rebellion & Terrorist group’s push into the neighboring regions has elicited global criticism, with the UN additionally reiterating calls for all parties to end hostilities.

Billene Seyoum, Abiy’s spokeswoman, told a press conference Thursday that more than 300,000 people had been displaced by recent fighting in Amhara and Afar.

World leaders, meanwhile, are urging the TPLF to commit to a ceasefire to facilitate aid delivery in Tigray, where the UN estimates fighting has pushed 400,000 people into famine-like conditions.

The United States urged the rebels to protect the heritage site with State Department spokesman Ned Price also renewing calls for an end to the violence.

A UN spokesman said on Thursday that up to 175 aid trucks carrying humanitarian aid had arrived in Mekelle, the capital of Tigray region.

The Office for the Coordination of Humanitarian Affairs said the current aid is not sufficient, with an estimated 100 trucks needed every day to assist 5.2 million people there in need, said Stephane Dujarric, the chief spokesman for UN Secretary-General Antonio Guterres.

The spokesperson called for a political solution to the conflict in Tigray as fighting has spilled into Afar.

(With input from AFP, Xinhua)

Facebook’s policing of vitriol is even more lackluster in Ethiopia, critics say