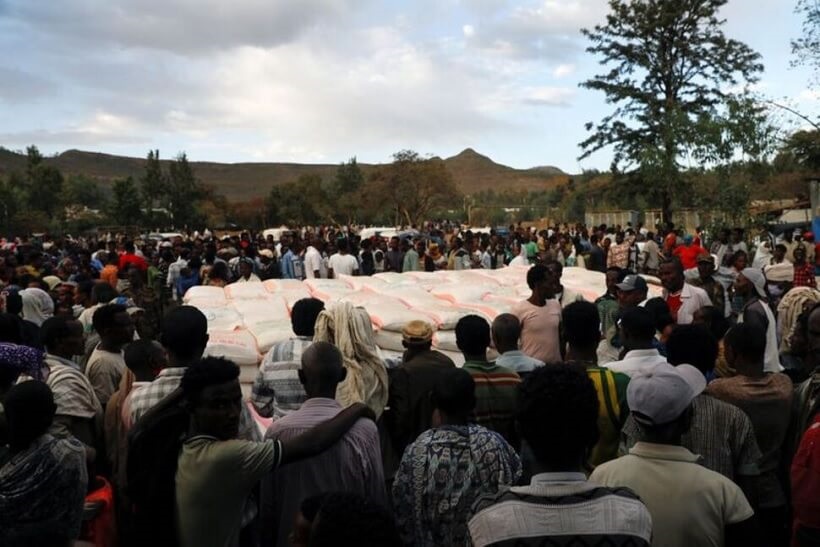 NAIROBI (Reuters) -Forces from Ethiopia’s northern region of Tigray conceded on Tuesday that they had lost control of the populous town of Shire to the Ethiopian military and their allies, while the government signalled it believed it was winning on the battlefield.

Ethiopia’s army and allies including troops from neighbouring Eritrea have been battling Tigray forces on and off since late 2020, a conflict that has killed thousands, displaced millions and left hundreds of thousands on the brink of famine.

“If we don’t defend ourselves against our enemies, they will continue the atrocities,” the Tigray authorities said in a statement.

The United Nations human rights office said it was concerned that some air strikes by Ethiopian government forces in Tigray had been indiscriminate.

Shire, located 140 km (90 miles) northwest of Tigray’s regional capital Mekelle, is one of the region’s biggest towns and hosts ten of thousands of people who were displaced from other areas by the conflict.

Spokespersons for the Ethiopian government and army and for the Eritrean government did not respond to requests for comment on events in Shire.

Redwan Hussien, National Security Adviser to Ethiopia’s Prime Minister Abiy Ahmed, said the conflict was not spiralling — a thinly veiled rebuke of U.N. Secretary General Antonio Guterres who said on Monday it was spiralling out of control.

“It was spiralling when being expanded to other regions. Now, it’s just being extinguished & degenerating. Aid & services (to Tigray) to follow soon!” Redwan said, suggesting the government believed it was making decisive military gains.

Tigray forces had advanced into neighbouring regions and towards the Ethiopian capital Addis Ababa late last year before being pushed back.

Redwan said the government was waiting for the African Union to announce a date for peace talks to start.

The conflict is rooted in long-running rivalries between regional power blocs over control of Ethiopia as a whole and in deep disagreements over how power should be balanced between federal and regional authorities.

The United Nations, the European Union and several senior U.S. government officials have all called in recent days for an immediate ceasefire, for African Union-sponsored talks to get started and for Eritrean troops to withdraw from Ethiopia.

A Tweet on Tuesday by Eritrea’s Information Minister Yemane Meskel appeared to hit back at critics and accuse them of being biased in favour of the Tigray People’s Liberation Front (TPLF), the dominant political party in the region and a sworn enemy of Eritrea.

“Sadly, familiar pattern is again in full display: provide tacit support to TPLF when it unleashes reckless offensives by rejecting all peaceful avenues & raise specter of humanitarian catastrophe when on retreat,” he wrote. He did not say who he was accusing of tacitly supporting the TPLF.

Eritrea is an authoritarian, highly militarised state that does not brook criticism or allow independent media scrutiny.