Peace and Development Center International — the shady NGO in Ethiopia that hosted the diplomats who met with a TPLF official last Sunday — is in full damage control mode. The center has taken down the names of prominent figures from the “Who We Are” section on its website.

Fortunately, there are still breadcrumbs leading to who they are… and the trail leads right into the White House.

Founding members of PDCI include some of the wealthiest and most influential members of the Ethiopian diaspora, including Mimi Alemayehou, who served as Executive Vice President of the Overseas Private Investment Corporation (OPIC) and who was ranked by Forbes as one of their “20 Young Power Women in Africa 2013.”

Alemayehou was involved in the presidential campaign to elect Biden. And in June, she was appointed as an independent director to Twitter’s board of directors.

Over the past two to three months, scores of those supporting Ethiopia over the Tigray conflict on Twitter have had their accounts suspended and deleted or have received warnings for supposedly breaking its rules while pro-TPLF accounts have continued to tweet threats, make abusive comments, and promote their narrative.

Another founding member is Daniel Yohannes, former U.S. ambassador to the Organization for Economic Cooperation and Development (OECD). Yohannes is reportedly the center’s point of contact in the U.S. government.

PDCI members were among Ethiopians specially invited to the White House in the late summer to discuss the conflict with top officials, reportedly including Jeffrey Feltman, the U.S. Special Envoy for the Horn of Africa. The meeting was held just before Feltman travelled back to Addis Ababa in August.

As Sputnik International noted yesterday, the PDCI has among its partners and USAID “which is part of the U.S. State Department,” and the National Endowment for Democracy (NED), “a well-known and self-admitted CIA front, both of which have astroturfed opposition parties and funneled funds to pro-U.S. groups from Hong Kong to Nicaragua and beyond.”

It’s also worth noting, as @EliezerAbate discovered, that PDCI was formed in September 2020, with its website registered on November 3, 2020. On the evening of that November 3rd, the TPLF attacked outposts of the Ethiopian Northern Command.

Another one of those involved from the start has been Senait Fisseha, who chaired the campaign to get Tedros Adhanom Ghebreyesus appointed director-general of the World Health Organization. She has also served as his chief advisor. Tedros has made his sympathies for the TPLF crystal clear over social media.

And yet another is Kassahun “Kassy” Kebede, the founder and managing partner of the lucrative private equity fund, Cepheus Growth Capital.

Kassahun is also linked to the Washington think tank, the Center for Global Development, which published Mark Lowcock’s anti-Ethiopian hit piece, “How to Destroy a Country: Does Ethiopia Have a Future?” just before he made the news talk show rounds, most prominently on PBS NewsHour with Nick Schifrin. Lowcock is a Non-Resident Fellow at the Center for Global Development.

Many critics anticipate that members of Peace and Development Center International are now scrambling to deflect and deny the bombshell of the phone cam recording of their Sunday Zoom meeting in which prominent retired and still active diplomats met with a TPLF official Berhane Gebre-Christos.

At the Zoom meeting, participants such as Tim Clarke praised Berhane while Vicki Huddleston hoped the TPLF would “have military success fairly soon” and Stéphane Gompertz suggested, “…You either hope that people around [Abiy] either in government or in the military realize that this is going nowhere and might force him to, well, accept the cessation of hostilities or force him to step down?”

Donald Yamamoto, retired U.S. Ambassador to Somalia who still works with U.S. security officials, said, “Abiy is not listening… Obasanjo has not been extraordinary helpful or very active, and so are there any other opportunities that you see?”

Another founding member of PDCI is well known entrepreneur Eleni Gabri-Madhin, who set up the center’s website. She issued a statement yesterday claiming her participation at the Zoom meeting has been “deliberately misrepresented.”

But clips of her involvement spread rapidly on social media, and there are widespread calls for her to lose her job as Chief Innovation Officer for the UN’s Development Programme. 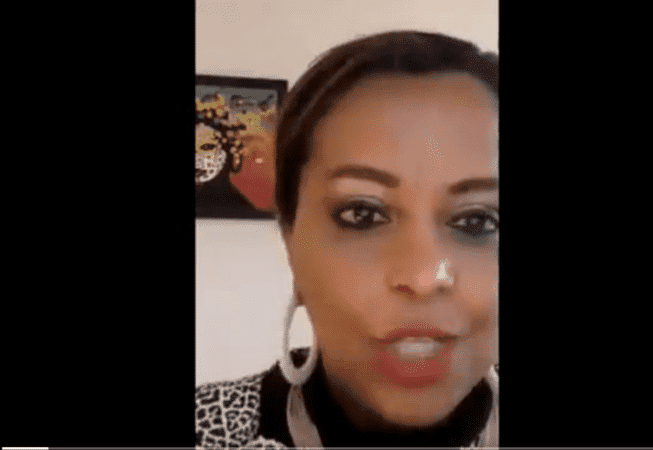