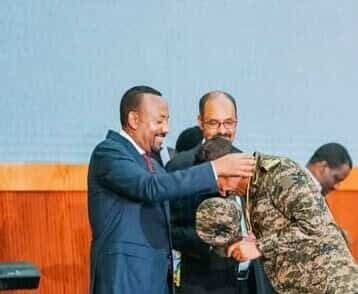 Just like the murderous leaders of the TPLF, these lackeys of Abiy Ahmed have very flowery and religious sounding names that hide their vicious sub-human nature. The bigwigs of TPLF had names like Tsadkan, Kdusan, Sibhat and Bereket which mean “The Righteous”, “The Holy”, “praise” and “blessings”, respectively. Abebaw means ‘the flower”; Zelalem Mengiste means, “My Eternal Kingdom” and Temesgen Tiruneh means “be praised (God), for You are good”. Saintly names of devilish characters! This is why Ethiopians say መልከ ጥፉን በስም ይደግፉ።

An acute pupil of Fascist Italian tactics, Abiy Ahmed has chosen three of the top military and intelligence officers with Amhara descent to do his dirty job of hunting down Fanno for him. “Kill the snake with a stick and throw away the stick along with the snake”, says an Amharic proverb. እባብ ግደል ከነበትሩ ገደል። This way Abiy will hit two birds with one stone. He will use these musketeers to get rid of Fanno and in the process make the musketeers the most hated among their brethren. Even Abebaw, of stellar fame in the war against TPLF, will come out totally discredited from this Askari operation. Abiy will thus get rid of or neutralize the very few Amhara left at the highest echelons of Ethiopian military and security forces.

The three musketeers sent by Abiy Ahmed to shed the blood of their brothers have appeared at an annual church celebration over the weekend to mollify the faithful Amhara.  This is just days before their operation Liquidate-Fanno is to be officially inaugurated with pomp and fanfare. (In fact, after this article has been written as a comment, a very divisive ceremony for awards and recognitions was staged in Bahr Dar with the chief Viceroy and all the Shumbashi in attendance. The millions spent on this phony celebration could have been spent to create jobs and security for the family of those who lost loved ones in the war. Alternatively, it could have been used to build temporary shelters to the 100 thousand war-displaced in Sekota who sleep on the bare ground under the empty sky).

The church-attending murderous gang have stationed themselves in Bahr Dar, with their temporary headquarters being the Avanti Hotel. As they are drenched in red champagne with their mouth full of raw meat, they are planning the murder and assassination of Fanno members that drink the untreated water of the river and most days go without food in their fox caves.

Of course the three musketeers only serve as an Amhara front (mask) for Abiy Ahmed’s elite OPDO-OLF force that is currently enforcing an undeclared Command Post or State of Emergency over the Amhara Region with a combination of Republican Guard, ENDF Oromo units, special commandos and killing squads.

Why Abiy Ahmed chose this time to attack Fanno is incomprehensible to many. TPLF is not only beating war-drums but is actually rolling its forces into Eritrea and Amhara. They are poised to start a full-scale invasion during the rainy season and why Abiy Ahmed wants to dismantle the only available and working defense of the Amhara people against this invasion is hard to understand. TPLF affiliated media have been spreading rumors that the TPLF and OPDO have come to terms on the need to destroy Fanno. Eritrea also seems to be, according to some analysts, another prospective joint target for Abiy and Debretsion. Reports of clandestine negotiations between Abiy and the TPLF have surfaced and yet the Ethiopian people are left in the dark as to the genuine intentions of the OPDO government of Abiy Ahmed. Some well-respected activists have expressed their suspicion that Abiy’s operation against the Fanno is to clear the way to a handover of Welkait to TPLF.

However, many observers of Ethiopian affairs believed that the liquidation of Fanno is to open the door to an unencumbered large-scale genocide of the Amhara. This genocide, although already underway, is thought to be scaled up many-fold under coordinated nation-wide operations of TPLF and OPDO/OLF.  Many political party leaders as well as members of NGOs have warned of the signs indicating this impending doom.

All that can be said at this point is that Abiy Ahmed has assigned three of his top commanders to his Liquidate-Fanno task – which shows where his priorities are; and this does not augur well for Ethiopia or her neighbors.

As to Abebaw and the other Shumbashi, we can only pray that the God of Geberemenfes Kidus, the saint that they blasphemed as they were planning which Fannos to slay, blast them out of existence before they complete their treasonous assignment.