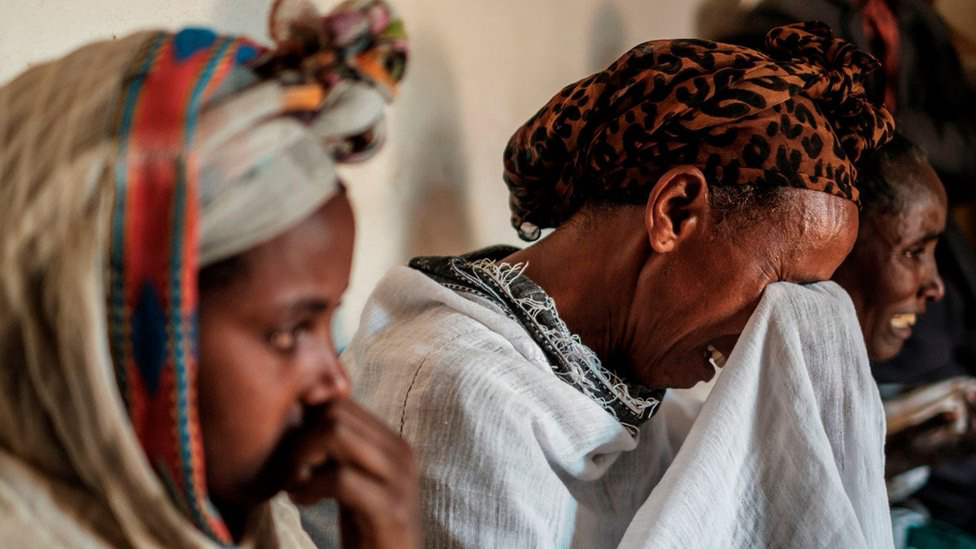 More than 200 civilians of the Amhara ethnic group have been massacred on October 20, 2022 in JoJ, Wellega, Oromia. This is the same location where a few months ago armed terrorists from the OLA (nicknamed Shene or Onegeshime – to hint at government collusion with the terrorist group) stopped a passenger bus and selectively slaughtered 25 Amhara passengers. A huge contingent of the terrorist OLA force has been reportedly stationed in the area for the past year or so.

Joj is located in Oromia, on the bank of the Blue Nile River that borders the Amhara region.  In Wellega Oromia, the past year has witnessed intensified Amhara massacres with genocidal and ethnic cleansing objectives. Besides the actual killings, the plunder has left the survivors impoverished as they are forced to leave empty-handed; leaving their homes and properties behind. For tens of thousands of Amhara, leaving the area alive has become a luxury as all the exits are blocked by OLF terrorists that prey on the displaced.

The OLF has a sickening track record of hate-crime: Thirty-two years of Amhara burning. That is the history of the OLF from 1990 to 2022.

The Oromo Liberation Front’s army (OLA ) , with the assistance of EPLF forces, captured the border Wellega town of Asosa, present day Benshangul capital, and burned hundreds of Amhara civilians alive. That was January of 1990.

Thirty-two years later, in 2022, the OLF is still engaged in the savage terrorist act of Amhara burning. The only difference is that its atrocities against the Amhara this time have governmental support, approval and backing. The OLF has been allowed to decimate, loot and displace the Amhara for economic, political and ideological gains. Also, today, the OLF has morphed into various entities spanning from the Oromo Prosperity party in Office to OLF and OFC in opposition politics all the way to the terrorist brand nicknamed Shene (OLA) in the forests of Oromia, Amhara and Benshangul-Gumuz regions. Why this latest OLF entity claims fighting with the government, its major victims by far are the unarmed or disarmed Amhara civilians living amongst the Oromo. It has used extreme and savage violence to strip Amhara farmers of their properties and their lives and force over a quarter million into displacement. This pattern of OLF (Shene, or Oromo Liberation Army, as it calls itself) activity against the Amhara suits all varieties of the OLF that never, even nominally, condemn the violence. Instead, these various versions engage in various campaigns of disinformation and blame-the victim exercises. OFC has gone as far as fabricating stories that not only incite the Oromo into further violence against the Amhara but also prepare the psychological ground work to shift the responsibility of the Amhara massacres on the victims or on non-existent aggressors crossing the borders of the beleaguered Amhara regional state.

OLF proper as a registered political party partnering with the victorious TPLF (that ousted the Derg in 1991 with EPLF) had temporary control of Eastern Ethiopia before its fall out with the TPLF government. OLF used this opportunity to bring its Assosa terror to Arsi and Hararghe, Eastern Ethiopia. More than 50 peasant associations were burnt down and looted. Amhara and Christians were targeted for killing. Anywhere from 800 to 1000 people live in one peasant association. Tens of thousands of civilian farmers disappeared.  Many Amhara farmers, their wives and children were burnt alive while other civilian Amhara were thrown alive from cliffs with hands tied behind their backs. The TPLF used televised videos of such atrocities to discredit and eject the OLF from government. That was in the 90’s.

The OLF this time commits its atrocities against the Amhara with extraordinary support from the government. The OLF has been allowed to loot two dozen banks with impunity. Government shut-down of the telecommunication network and all roads leading out of the target area is only one support. The major support the OLF gets from the government is a co-ordination of troop movements so as the OLF could carry out its job of massacring Amhara undeterred. Some, however, argue the government’s greatest support to the terrorist OLF is in the propaganda, cover-up and disinformation sphere. Every time the OLF massacres civilians, the Oromia regional state issues a statement falsely reporting that so many OLA combatants have been destroyed. Also, the government of Abiy Ahmed has been known to issue statements that falsify (minimize) the number of victims and the extent of damage.  This pattern has now been so entrenched that the public expects the officially reported number to be only a tenth of the real casualty. A very telling example was when the government reported 200 people killed by Shene in Tole, when satellite images showed 5 villages and close to 5000 homes burnt.  Just one individual survivor testified to having buried sixty people including 20 of his kin.

What happened in Wellega, Oromia during Meskel 2022?

Meskel is celebrated at the beginning the third week of the Ethiopian month of Meskerem (September) which is the first month of the Ethiopian calendar. This year, during this week, OLA set on fire a pile of Amhara farmers both alive and dead. This was accompanied by a huge massacre of civilians and a burning of people inside their homes. The holiday that Ethiopian Christians celebrate by burning a pyre was celebrated by setting live humans on fire. And the world is quiet. The government of Abiy Ahmed tried to suppress the news by overly propagandizing the contemporaneous (and suspicious) death of a singer. Since then, in Horo Gudru and Sibu Sire zones of Wellega, homes of ethnic Amahara had been ransacked and destroyed. Entire families with young ones have been slaughtered in their sleep.  Tens of thousands of Amhara have been seen on social media videos leaving their farms and trekking on foot. Pictures showing bodies of several of them killed and strewn along-side the road have also been circulated.

As destructive as it is, what has transpired so far is only the tip of the iceberg. So far, the genocide has affected close to half a million Amhara living in Benshangul-Gumuz, Oromia Region and Amhara Region. There is an estimated 15 million Amhara living in what the TPLF designated as the Oromia Region. Worse still, there are millions of Amhara living outside Oromia region in the Amhara region that the irredentist OLF claims. In fact, it is Amhara whose ancestors migrated from these regions to live amongst the Oromo that are currently being massacred in Wellega, Oromia.

The war in northern Ethiopia gets enough international coverage, often distorted or severely-biased . It appears that the arms-peddlers of the military industrial complex see a potential in TPLF with its alleged billions of looted dollars stashed overseas – If a safe-passage is obtained, they hope to involve this money in the purchase of military weapons.

On the other hand, it appears that there is a lack of desire by the so-called international community to stop or even seriously discuss about the Amhara genocide waged by the OLA. It is as if they are waiting for the genocide to surpass the threshold of the Jewish Holocaust or the Rwandan Genocide.  By then it would be too late. Too late not only for the Amhara, the Ethiopians etc., but for the entire world. A multi-ethnic nation of 110 million, with ethnic boundaries crossing over political boundaries in all directions exploding, will not be easy to contain. These millions live not far from the strategic Red Sea shipping lines and the Middle East and not far from the Mediterranean.