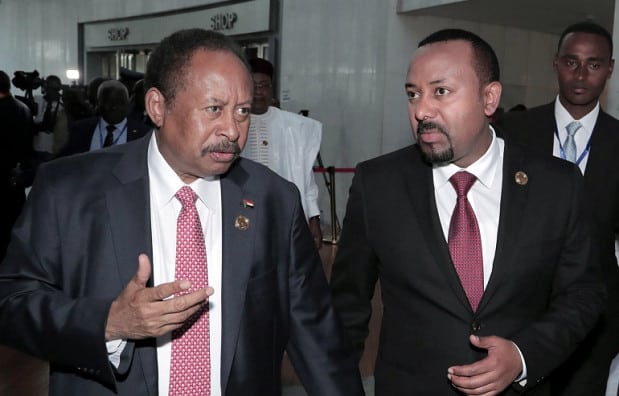 Abdalla Hamdok’s office said the meeting with Abiy Ahmed took place in the Horn of Africa nation of Djibouti, on the sidelines of a summit of a regional bloc. His office said Sudanese and Ethiopian officials would convene Tuesday in Sudan’s capital for border talks. It did not give further details.

The two leaders’ meeting came just days after a cross-border attack by Ethiopian forces and militias that killed at least four Sudanese troops and wounded a dozen others in the Abu Tyour area in eastern Sudan’s al-Qadarif province.

Sudan’s state-run news agency reported Saturday that the military had deployed “large reinforcements” into al-Qadarif province to reclaim territories controlled by Ethiopian farmers and militias in Sudan’s al-Fashqa border area. The troops would stop at the border line according to the 1902 deals between Sudan and Ethiopia, SUNA reported.

Tuesday’s cross-border attack in Abu Tyour came amid weekslong fighting in Ethiopia’s northern Tigray region that has pitted the federal government against regional authorities. The Tigray fighting has sent over 52,000 Ethiopian refugees into Sudan, mostly into al-Qadarif province.

At the start of the clashes in Tigray, Sudan deployed more than 6,000 troops to its border with Ethiopia.

The attack in al-Qadarif was the latest by Ethiopian forces and militias on Sudanese troops and people over the past several months, and has strained ties between the two neighbors. The sides have held talks in recent months to encourage Ethiopian farmers to withdraw from Sudan’s al-Fashqa border area, which they have cultivated for years.

Following the attack, the head of Sudan’s ruling sovereign council, Gen. Abdel-Fattah Burhan, travelled to al-Qadarif and spent three days there overseeing the deployment of heavily armed troops to the border area, according a senior military official. The official spoke on condition of anonymity because he was not authorized to brief the media.

Ethiopia’s prime minister on Thursday downplayed the attack, saying that “such incidents will not break the bond” between the two countries.

“We always use dialogue to resolve issues. Those fanning discord clearly do not understand the strength of our historical ties,” Ahmed tweeted.

Ahmed and Hamdok met at a summit of the Intergovernmental Authority on Development, known as IGAD, where the Tigray fighting would likely top the agenda. Hamdok is the current head of IGAD.