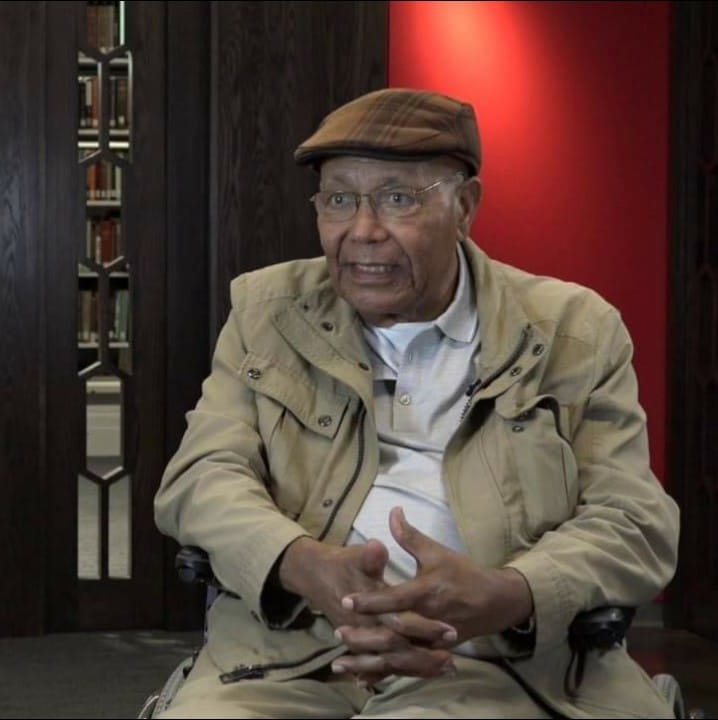 With sorrow, we are releasing this statement on the occasion of our beloved Getatchew Haile’s passing. It was an honor to call him a husband, father and grandfather. He will be dearly missed.

Prof. Getatchew Haile passed away on June 10, 2021 in New York City after a long illness. Prof. Getatchew’s groundbreaking achievements in Ethiopian Studies reshaped the field, and his dedication to his beloved Ethiopia was a source of global renown. He was widely admired for his courage and resilience in the face of significant personal challenges, while his generosity of spirit and joyful embrace of life endeared him to devoted family, friends and colleagues across the world. He leaves behind an enormous legacy and an equally enormous void that will be deeply felt.

Getatchew was born in rural Shenkora, Ethiopia in 1931. His was a modest upbringing that encompassed a period of upheaval and homelessness resulting from the Italian occupation. He was eventually able to enroll at Holy Trinity Spiritual School in Addis Ababa, and at the conclusion of secondary school went abroad for further study. He received a B.A. (1957) from the AUC The American University in Cairo, a B.D (1957) from the Coptic Theological College in Cairo, and a Ph.D. (1962) from the UNIVERSITY OF TUBINGEN (Eberhard Karls Universität Tübingen), Germany (where he changed the spelling of his name from “Getachew” to “Getatchew” to ensure proper pronunciation by German colleagues). Upon his return to Ethiopia in 1962, he served briefly in Ethiopia’s Ministry of Foreign Affairs and then taught for ten years in the Department of Ethiopian Languages and Literature at Haile Selassie I (now Addis Ababa University ).

In 1964 he married Misrak Amare, and the two soon started a family. They settled into a life of their choosing as eager members of a generation motivated to advance Ethiopia during a period of postcolonial excitement across Africa.

Their plans were upended in 1975, after the Derg came to power in Ethiopia. Getatchew served as a member of the short-lived civilian parliament, representing his province of Shoa, and in that role was an outspoken advocate for democracy and the separation of church and state. In October 1975, Derg soldiers attempted to arrest him for those views. In that attempt, he was shot and nearly died. Though he survived, he was left a paraplegic.

Thanks to the intervention of many friends, Getatchew left Ethiopia to receive medical care in England, and in 1976 made his way to the HMML Hill Museum & Manuscript Library (HMML) at Saint John’s University in Collegeville, Minnesota. At Saint John’s, he became Regents Professor of Medieval Studies and Curator of the Ethiopia Study Center at HMML, where he was a valued leader and a beloved friend and colleague to many over four decades.

Getatchew’s vast knowledge, collegiality, and numerous publications, most notably the volumes of the Catalogue of Ethiopian Manuscripts Microfilmed for the Ethiopian Manuscript Microfilm Library, created an impact on his field rarely witnessed in any discipline. His enormous contributions were well recognized by the wider academic community. Significant awards included the prestigious MacArthur fellowship (1988) (the “MacArthur genius grant”), the first Ethiopian and first African to receive the award; the British Academy’s Edward Ullendorff Medal (2013); election as corresponding member of the British Academy (1987), again the first Ethiopian or African to receive that honor; and board membership of many prestigious academic journals.

Outside his academic work, he was a tireless advocate for Ethiopia through countless articles, speeches and interviews, and as publisher of the magazine Ethiopian Register. He received many awards for this work, for example as one of the first recipients of the Society of Ethiopians Established in Diaspora’s (SEED) annual award (1986) in recognition of his great effort on behalf of Ethiopian culture and history and his struggle for human rights and the recipient of the Bikila Award, a Lifetime Achievement Award (2018). He was also a dedicated member of the Ethiopian Orthodox Tewadeho Church which he served in many capacities.

Getatchew never let the challenges and constant pain of paraplegia stop him from full participation in life’s pleasures. He always said “yes” to every proposal, from travel for academic conferences to trips to visit family to sunset drinks on the dock of his beloved Minnesota lakeside home. He always answered calls for help and touched many lives as a result. He took joy in the successes of colleagues and mentees and burst with pride at the accomplishments of his children and grandchildren. He appreciated beauty both natural and manmade (his Amharic penmanship was legendary). He was sentimental and cried at graduations, weddings and sometimes for no reason at all. He continually made new friends of all ages and from every conceivable background. Even in his final months, as he was slowly losing his fight against the inevitable, time with him left a visitor energized and uplifted. He was joyful to the end.

In October 2016, Getatchew and Misrak moved to New York City to be closer to their children and grandchildren. From his office in New York, Getatchew continued both his scholarly work and his advocacy for Ethiopia. His final speeches and interviews were given over Zoom – appropriate for a man who loved using the latest technology. He completed his final book earlier this year, and its posthumous publication will be fitting final punctuation to an extraordinary career.

If he had one regret, it is that he was not ever able to return to Ethiopia since departing in 1975.

Among immediate family Getatchew is survived by his wife Misrak, his six children, Rebecca (Jean Manas), Sossina (Jeffrey Snyder), Elizabeth (Nephtalem Eyassu), Dawit (Tracy), Mariam-Sena and Yohannes, and ten grandchildren. He held his sisters-in-law Hirut Amare and Martha Amare and his niece Teyent Germa especially close. Getatchew was a deeply religious man, and in recent weeks he let it be known that he was ready to meet his Maker with the words of St. Paul in mind: “I have fought the good fight, I have finished the race, I have kept the faith”. Yes, beloved husband, father, Ababa, uncle, brother, friend, colleague, mentor, our Wondim Tila, ye Shenkora Jegna, you have.

In lieu of flowers, memorial gifts may be made to the Hill Museum and Manuscript Library, Saint John’s University, Collegeville, Minnesota (www.hmml.org) or to The Getatchew Haile Scholarship Fund at Ethiopia Education Initiatives (www.ethiopiaed.org), whose first project is the Haile-Manas Academy in Debre Birhan, Ethiopia.