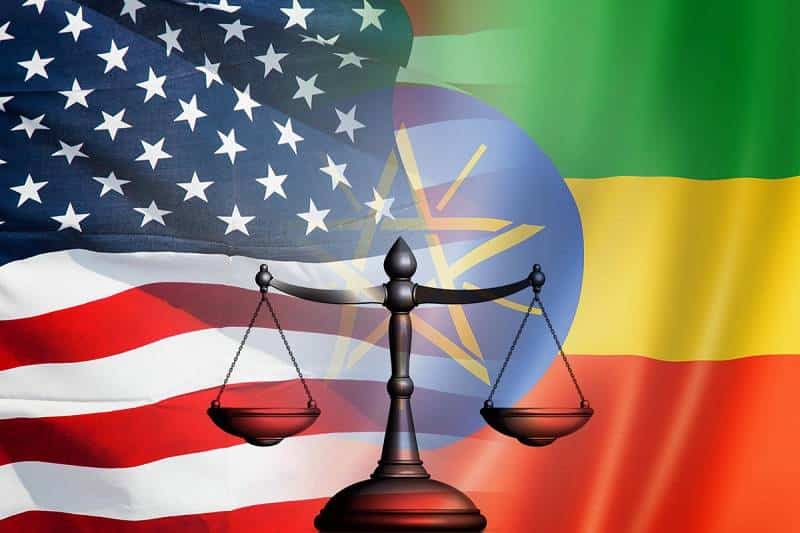 The United States of America is currently involved in widespread hostile propaganda and diplomatic campaign against Ethiopia. One can state this aggressive hostility has recently reached a level of belligerency.  The sole objective of the campaign indicates that the US is bent on endangering the territorial integrity of the country and the sovereignty of the state of Ethiopia through some serious intervention. The diplomatic and propaganda campaign mirrors similar actions that the US has taken in the recent past in Iraq, Syria, Libya, and Yemen.  The tragedy and human suffering that followed in all of these countries is still weighing on the conscience of humanity.  Hence, humanity should act quick to stop a repeat of the US design in Ethiopia.

The US administration has successfully secured the alliance of several Western European countries in tandem with the UK, as well as international organisations such as the UN and EU.  This makes the confrontation between Ethiopia and the West similar to that between a rabbit and a herd of elephants.

In this rubric stand the leaders of a renegade group called the Tigray People Liberation Front (TPLF).  The TPLF ruled Ethiopia and subjugated the people for 27 years until they lost their grip on the monopoly of political power over three years ago.  When a violent popular protest seemed to engulf the, the TPLF leaders moved to Tigray and rebelled against the central government with the hope of regaining the power they lost. They arrogantly rejected several attempts that the government offered to resolve their differences through mediation by religious and community leaders.

The TPLF have been committing countless violations of human rights in atrocious manners for over four decades, both during the period when they were a guerrilla group and whilst they were in power for twenty-seven years; most importantly during the last one year in Amhara and Afar regions where they have occupied by force in this current civil war.

These violations constitute crimes against humanity and the crime of genocide, torture, execution, forced disappearance, and mass incarceration of innocent people. These commissions of crimes have been widely reported at different times by Human Rights groups such as Amnesty International and Human Rights Watch.

The most diabolical atrocities that the TPLF leaders committed occurred on 3 November 2020 in the Northern Army Command barracks in Tigray. Prior to that day, members of the TPLF, who were also part of this army, had completed a treasonous conspiracy including disconnecting all radio and other military communications. They executed the plan during the night by stabbing, shooting, and hacking non-Tigrayan officers. This Command was the largest in the country. By massacring all high-ranking officers and confiscating the armament, they believed they would weaken the entire National Defense Forces of the country. No government would condone this.

The second most heinous crime committed by the TPLF is another cold-blooded killing of over a thousand civilians in Mai Kadra one day and night, a gruesome violence the occurrence of which has few comparisons in Ethiopia.

Fast forward to July 2020, the TPLF launched a military offensive outside the region into the adjacent Afar and Amhara regions, pushing hundreds of kilometers. They ravaged every city, town, and rural village, destroying all social structures such as schools, universities, hospitals, clinics, factories, etc. and continue to terrorise the civilian population by killing and torture. (In Kombolcha city alone they killed 100 youth on the morrow of their arrival). They  gang raped women and young girls, desecrated churches and mosques, and looted all property, reducing residents to acute food shortage and famine.

During all this time, the West and international organisations showed blatant support. They shouted in a continuous chorus demanding ‘unfettered humanitarian access’, to enable them to supply food and logistical support for the rebels. Nearly 900 trucks that transported World Food Program food to the rebel base-area were never returned and are widely believed to provide troop transport for the rebel fighters. The donors are quiet on it.

The propaganda campaign by the Western media against Ethiopia has been disseminating fabricated lies. It is only short of stating the existence of weapons of mass destruction in Ethiopia akin to what we remember a few decades ago in Iraq. They depict the rebels as victims of the war and cover up all of the atrocities they have committed. One such recent episode is a leaked Peace and Development Centre International video conference chaired by Professor Ephraim Ishaq and attended by Berhane Gebre Kistos (TPLF), D. Yamamato (former US ambassador), Vicki Huddleston (former US deputy Assistant Secretary), Stephane Gometz (former French ambassador to Ethiopia), Carmen De La Pena (Spanish Diplomat), Tim Clarke (former EU ambassador to Ethiopia), Robert Dewar (former UK ambassador to Ethiopia), Kirsti Aamio (former Finnish Ambassador to Ethiopia), and Eleni Gadre-Madhin (UNDP).

Although the conference was poorly choreographed, seeing the list of the participants, nearly all high level acting or former officials from Western Europe and USA, gives a glaring example of how Western countries are working tirelessly to bring down Ethiopia. This is just one tiny episode of  the conspiracy against Ethiopia being cooked up by Western powers and their media for over a year.

We do not see any African or Asian persons. Does this ring a bell?

One can comment that despite the credentials of the participants and the number of blatant lies stated at the conference, it is plain that the conference did not achieve its intended objective. Notwithstanding that, it clearly showed the West’s malevolent intent against Ethiopia.

On the ground, the TPLF acting as the agent of these forces continue to terrorise the people and has waged a proxy war against the country.

The Ethiopian government in these circumstances has no option but to respond to the rebels use of force with a counter attack. Ethiopia is a sovereign state and thus the government and the Ethiopian people have the obligation to protect the country’s sovereignty and territorial integrity as well as the safety and security of people. The majority of Ethiopians, at home or abroad in the diaspora, have expressed their determination to do this.

Recently the author of this article noted that: ‘War is a terrible phenomenon as its impacts are far reaching and affect society beyond our imagination. But there is no better option when a sovereign state is forced to raise arms in defense of just and legitimate causes. Paramount among those just causes is the defense the sovereignty of that state and its territorial integrity”.

Why are western powers so much against Ethiopia, a country unique in its ancient civilization, a beacon of independence for all people during their fight against colonialism, apartheid and racism? Strangely enough, those powers that are currently displaying extreme hostility are the very same ones who colonised Africa and institutionalised slavery, suppressing and exploiting black people not only in their colonies but within their own countries as well.

The pressure that the Western powers currently exert on Ethiopia and the western media that is oozing false information is reminiscent of what they did as a prelude to the attacks  they subsequently launched in Iraq, Syria, Libya and Yemen.

If Ethiopia is subjected to the same treatment as these countries, the consequence will be catastrophic and the human tragedy will surpass more than the combined total of what the above countries experienced.

The call now is for all peace-loving peoples of the world, particularly citizens of those hostile countries, to raise their voices for the truth.

The call is for all Africans and black people of the world to stand with Ethiopia as this Western move has all the hallmarks of a new colonial design to subjugate our continent.

All Ethiopians should stand in unison and resist this foreign belligerency just as their forefathers did to maintain their independence.

1 thought on “Stand for Ethiopia against Western Aggression”