Somalians resident in the United Kingdom on Tuesday held a protest outside the Ethiopian embassy in the country demanding that their country’s sovereignty be respected.

The protest was in response to a recent decision of Somali authorities to transfer a citizen to Ethiopia. Scores of protesters with placards assembled in front of the Ethiopia embassy in London in what was a peaceful protest.

Some of the inscriptions on the placards read: “The Somali people are not a commodity to be sold, I am Qalbi Dagax,” “Ethiopia must respect Somalia’s sovereignty! Stop interfering with our Somali government.”

The Somali people are not a commodity to be sold, I am Qalbi Dagax. Ethiopia must respect Somalia’s sovereignty! Stop interfering with our Somali government.

Ethiopia, others ready to ‘shed our blood’ for a stable region – PM Desalegn 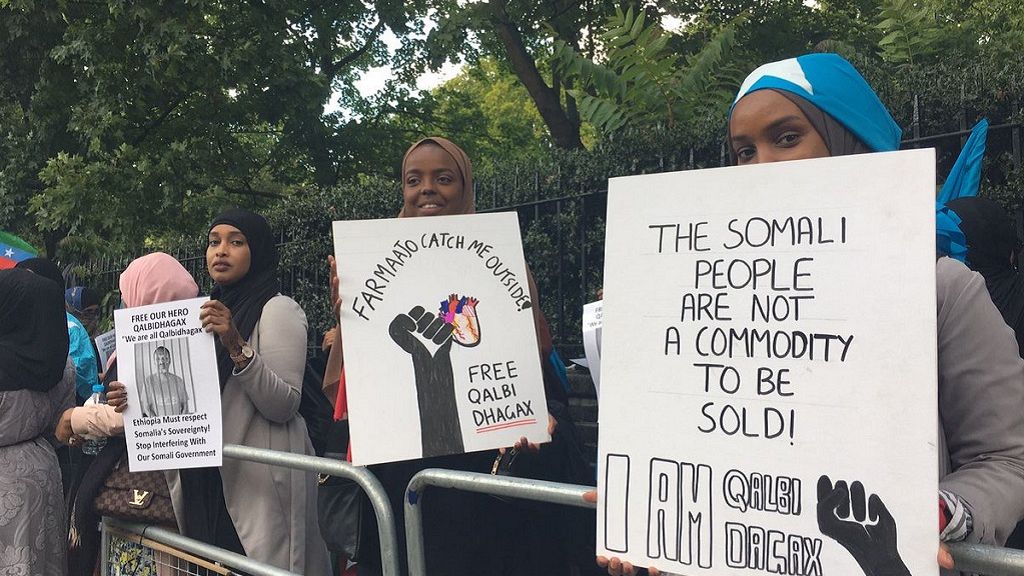 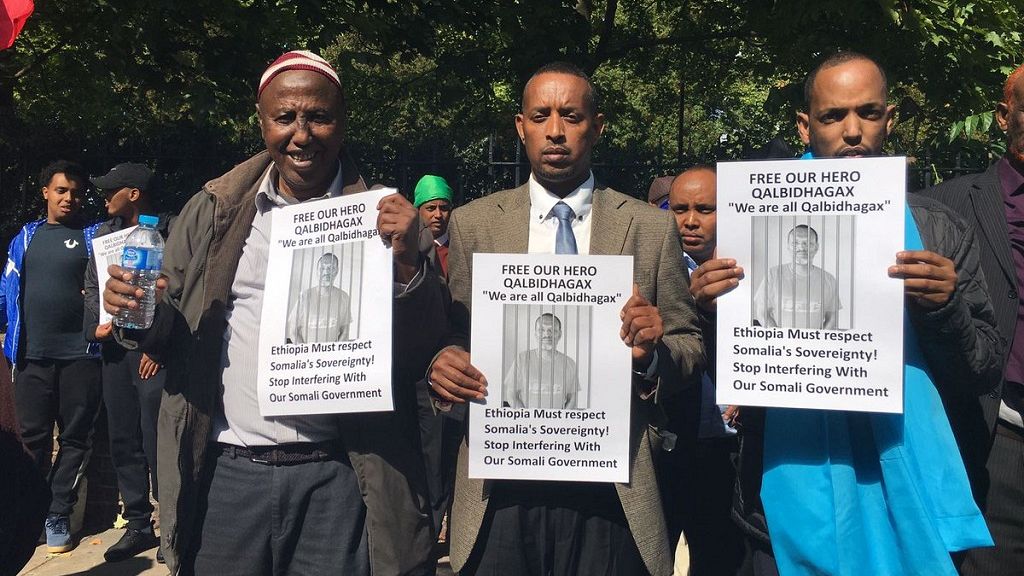 The detention and subsequent transfer of Mr. Abdikarin Sheikh Muse of the Ogaden National Liberation Front (ONLF) to Ethiopia on August 23 sparked outrage in the country. The action has been described as a breach of Somali and international laws – which decries refoulement.

The ONLF group in a statement confirming the action expressed worry about the possible mistreatment that Sheikh Muse was likely to face.

“The Somali government has forcefully transferred a political refugee to Ethiopia which is known to torture and humiliate its opponents. It has been intimated that Mr. Abdikarin was sacrificed in order ti get political support from the Ethiopian regime,” the statement read.

It condemned the Somali regime and called for the release of Muse – who Ethiopia insists holds an Ethiopian passport and opted to return voluntarily. That claim has been roundly rejected by the family and the group which he belonged to.

ONLF describes itself as “a national liberation organisation that struggles for the rights of the Somali people in Ogaden and has no involvement whatsoever in Somalia’s multifaceted conflict at all.”

The Ogaden region a disputed territory between both countries was the subject of a war in February 1977. Ex-Cuban president Fidel Castro okayed the deployment of 1000s of soldiers under the leadership of one General Arnaldo Ochoa to help Ethiopia in a war.

The troops went to support the regime under Mengistu Haile Mariam to annex the Ogaden region. Somalia at the time, albeit allies of Ethioipia believed they were winning the war but forcefully surrendered the Ogaden plateau to the 17,000 Cuban soldiers.