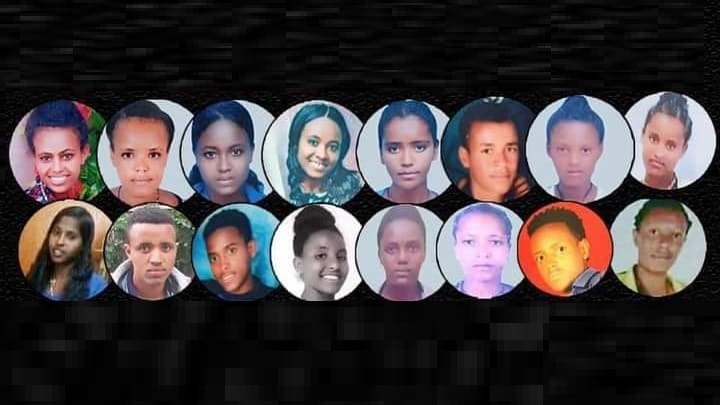 Subject:   Cry for the Immediate Release of the Abduction of mainly Female Students of Dembi Dolo University, Ethiopia One Year ago

Especially for the abducted students, parents and friends, life over the year since their abduction has been an absolute nightmare: full of sadness, anguish, painful, restlessness and uncertainty.

The abduction and disappearance of those innocent girls is absolutely immoral, shameful, sinful and crime against humanity. No civilised member of the international society shall rest until the release of those innocent victims. They did not commit any crime to anyone. They left their family and surroundings in the North and went to Dembi Dolo University in the Western part of Ethiopia to gain education and serve their people.

According to available evidence, especially from one of the girls who managed to escape in the forests, called Asmira Shumiye, “The students, mostly ethnic Amharas, were fleeing ethnic violence and threats in the university that is located in Oromia region. On 4 December last year, an unknown group of people blocked a bus and kidnapped students on board who were leaving for home from Dembi Dolo University in western Ethiopia. A total of 18 students – 14 women and four men – were ordered out of the vehicle at Sudi near Gambela city, about 100km (60 miles) from Dembi Dolo …” (One of the sources: https://zehabesha.com/national-movement-of-amharanama-condemn-govt-negligence-about-abducted-girls/

Amnesty International has also published similar information on 25 March 2020 under the topic of “Ethiopia: Parents fear for missing Amhara students as universities close over Covid-19” (https://www.amnesty.org/en/latest/news/2020/03/ethiopia-parents-fear-for-missing-amhara-students-as-universities-close-over-covid19/)

It is very sad that enough attention has not been given to coordinated campaign for their release. How can we sleep or rest until they are released?.  Please do everything in your capacity until they are released and reunited with their poor families in deepest human crisis. Otherwise history will judge us for neglect. Those responsible for such crimes shall be brought to justice.

The details of the abducted students are as follows: