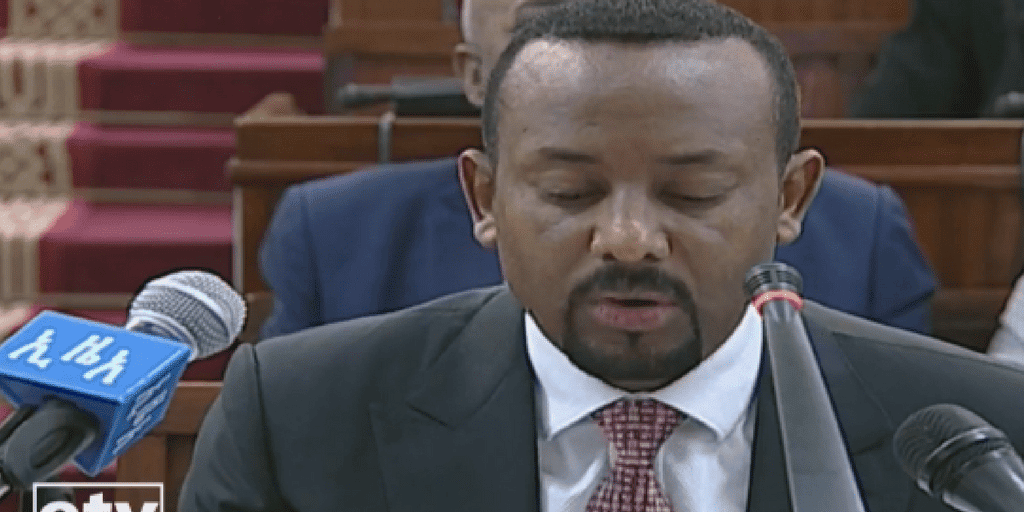 I ask your indulgence and time to read this open letter, which serves as a follow up to my last week’s piece titled “A Candid Open Letter to PM Abiy: Ethiopia Needs a Statesman Not a Party Leader.”

Of recent, Ethiopians have watched a prelinary session of the Ethiopian House of People’s Representatives where Prime Minister Abiy made presentations and answered questions from the floor. The session manifested a disturbing display of a lopsided power dynamics akin to one between an imperious kindergarten teacher and her awed and coyed kindergartners. Your body language lexicon of discomfort spoke louder than the timid questions that some of your members mustered the courage to utter.

Your timidness in the face of an overbearing Prime Minister and an inherently flawed Constitution that lacks a constitutional leash to keep the executive branch in check is putting the nation in grave danger. The situation is exacerbated by an intellectually stunted and morally depraved political elite at home and in the diaspora.

Unfortunately, the Ethiopian intellectual class has failed to produce opinion leaders who could catalyze a groundswell of public opinion and a foundational political culture to keep the government within the confines of its constitutionally prescribed authorities.

In most democratic nations, governments are composed of three separate and equal branches: legislative (parliament/congress), executive (president/prime minister), and judicial (with supreme courts at the apex). By design each of the three branch is made independent and equally empowered to create a system of checks and balances.

When it functions as designed, this “checks and balances” system maintains a steady balance of power between the three branches and animates each branch to function properly. But alas, Ethiopia does not have a judicial branch within the paradigm of a three-branch constitutional governance structure. The people cannot take the executive or the legislative branch to court to protect themselves from the excesses of government.

What we have is a two-branch system of government: executive and legislative. If, out of fear or favor, the legislative branch bows to the executive branch, the Prime Minister will assume the status of a holy trinity bringing all branches of government under his control.

In Ethiopia, the Council of Federation is a pseudo constitutional organ created as an afterthought to give small tribes (አጋር ብሄሮች) an orphan-like status, rather than empowering them with a constitutional authority or ignoring them altogether. The Council is not empowered to pass or block laws. The framers of the Constitution made sure that small tribes were not empowered with such an authority, fearing they would align themselves with nationalist forces. The reasons are many.

First, tribal politics is inherently dangerous to small tribes. They cannot form a viable independent nation by themselves and their survival as a free and prosperous people depend on their ability to live with others under legal protection. Therefore, they see no benefit in Article 39.

Second, they also know that the cessation of larger tribal homelands (say Oromo and Amhara) from Ethiopia is not in their best economic interest. Their chance of surviving and thriving in a nationalist Ethiopia is far better than in a weaker and smaller Ethiopia that is shrinking by

secessionist drives. Therefore, they have inherent interest in seeing Article 39 expunged from the Constitution.

Third, the framers of the Constitution understood that if the Council of Federation was modeled after the US Senate and small tribes were given equal representation and equal right to enact or block laws like the US Senate, that will weaken tribal politics. Ethiopian politics would be shaped by negotiation and debates between the two chambers of the Parliament rather than by a tug of war between Oromo, Amhara, and Tigray. This means small tribal homelands would have a much stronger gravitas than the tribalist sentiment in the lower chamber in establishing the center of gravity of the national politics.

Assume the Court concurred with the plaintiff(s) and ordered the Oromo government to amend its constitution and forwarded its judgment to the Council of the Federation. Such a change can shake the foundation of the constitution. The Oromo members of the Council of the Federation can gather enough voice from Federalist forces to reject the Court’s judgement. This is the Constitution we call the law of the land, as laid out in Article 83 and 84 of the Constitution.

The ultimate decisions in constitutional conflicts that are legal in nature reside with the Council of Federation whose members are neither practicing lawyers nor legal scholars. In short, farmers, funeral DJs (ለቅሶ አስለቃሽ), የወፍጮ ቤት እና የጠጅ ቤት ባለቤቶች who are voted members of the Council become the overseers of the legality of the constitutional order.

Let us summarize. There is no independent judicial branch. The so-called Constitutional Court is accountable to the Council of Federations that serves as a pseudo judicial branch, and it, in turn, is accountable to the House of the People’s Representatives. Members of the Council of the Federation are appointed by the House of the People Representatives.

Let us conclude. In a nation where there is no true judicial branch and where the legislative branch willfully relinquishes its constitutional power in breach of its oath of office, the executive branch becomes the only empowered body.

The phenomena of having a prime minister, who also serves as Commander-in-Chief of the armed forces, the superintendent of the House of the People’s Representatives and the foster parent of the Council of Federation is dangerous. It necessarily, albeit gradually, transforms the prime-ministership into prime-monstership.

The people who sent you to Addis as their representatives did not send you with crayons and coloring books. You did not take an oath to be timid, much less to see the Prime Minister as kindergartners see their teacher with awe and reverence. Your oath requires you to fulfill your duty.

As a reminder this is the oath you undertook: “As a member of the house, I shall be faithful to the constitution. I shall undertake to discharge the responsibilities vested in me by the country and its people with integrity, diligence and in accordance with law and order.” Live up to your duty that you accepted under the weight of oath or resign and go back home.

I have written a lot about why the Ethiopian intellectual class has failed to produce opinion leaders. As I stated above, in other nations, intellectuals play a significant role to catalyze a groundswell of public opinion and a foundational political culture to keep the government within the confines of its constitutionally prescribed authorities. I will not rehash the arguments here. Instead, I will share the link and encourage you to consult it: “Ethiopia’s Political Problems Reside in Its Mythological National Identity.”

Ethiopia has colorful intellectuals covering a wide spectrum. On one end of the spectrum reside intellectuals sharing the same DNA construct with Professor Al Mariam. The other end is home

to people in the genre of Ato Yared Tibebu. The Professor’s reverence to Prime Minster Abiy and Ato Yared’s veneration to TPLF reminds me of the singer who lamented with “በአባቷ እምላለሁ አባቴን አስክዳኝ” conundrum.

Intellectuals are supposed to see political developments through a strategic lens to understand and reflect on current realities. Forget Tigrayan intellectuals. They are outliers even in an outlier space. Instead, let us focus on Amhara and Oromo tribal intellectuals who are busy feeding off of each other’s stupidity. They spend half their lives scavenging quotes from each other to use them as a fodder to keep the flame of tribal hate politics burning.

Anyone who has followed Jawar’s Facebook page before he was imprisoned knows that he was an excellent social media scavenger. He never missed an opportunity to share stupid anti-Oromo quotes spewed by Amhara tribalists. He was not shy to explain his actions on his official Facebook page that he was “not causing fire.” Instead, he was “just fueling a fire lit up by the action and inaction of the political parties and their leaders.”

The emergence of Jawar on the Ethiopian politics was consequential. The Amhara tribal land prayed for a leader to counterbalance him. As a punishment, God sent them Eskinder Nega, a random-walking and noisemaking clown. God doubled down his wrath on the Amhara tribalists, sending their way Shaleka Dawit, an Ivy-League trained lawyer with sophomoric sophistry, embalmed with formalin solution that is good for an autopsy of a rotten body politics rather than for a resuscitation of the political life of a nation in a dire need of peace and security.

With Eskinder and Shaleka Dawit, the Amhara tribal politics became an unholy joint project of an Orthodox political zealot and a retired communist. As if by curse, their marriage gave birth to a new diaspora movement led by “Vision Ethiopia” that is neither visionary nor Ethiopian in substance.

Both the Amhara and Oromo tribalists have one primary purpose. That is to present the other side in a bad light. Scavenged social media quotes and slogans are carefully quilted and stretched to link them to the PM or his administration to develop conspiracy theories. Far from being a constructive force, the intellectual clan has become the most destructive force Ethiopia has ever seen.

Even worse, the intellectual class’ damage is not contained within the Ethiopian geographic proper. Messing up international relations have become their preoccupation – an area they evidently least understand. There is nothing more disheartening than seeing intellectuals in the

diaspora አካኪ ዘራፍing in response to Professor Al Mariam’s delusional, if not utterly idiotic, article that he titled “Clash of Civilizations: Ethiopia and the US at a Crossroad.”

Meanwhile the diaspora intellectual nomenklatura was jumping around performing “የወላይትኛ ጭፈራ” and circling around the colorful Professor, doing “የትግርኛ እስክስታ.” The dance may be appealing to the eye.

Fast forward to March 24. Ethiopia was increasingly confronted with a chronic shortage of foreign exchange reserves, facing the risk of defaulting on its international loans and not being able to pay for critical imported goods, including fuel and cooking oil.

The US Special Envoy for the Horn of Africa, David Satterfield, showed up in Addis for a two-day meeting (March 21-22) dangling the HR6600 bill, which is different from, and more powerful than, a resolution that we were used to seeing in the past. Oblivious to the danger that Ethiopia was facing, the #NoMore community continued its dramatic እንጣጥ እንጣጥing, choreographed for a traditional አካኪ ዘራፍ and communistic “ፋኖ ተሰማራ እንደ ሆቺሚኒ እንደ ቼጉቬራ” crap. In the meantime, the Ethiopian government capitulated to international pressure. It issued a press release, effective immediately:

“Cognizant of the need to take extraordinary measures to save lives and reduce human suffering, the Government of Ethiopia hereby declares an indefinite humanitarian truce effective immediately.” The statement added: “Flights for ICRC, WHO, and the European Union have been facilitated to deliver humanitarian aid,”.

Ignoring Ato Yared Tibebu’s nauseatingly repetitive “በሁለት ሳምንት አዲስ አበባ በሕዋሓት እጅ ትጋባለች” ጥንቆላ, TPLF issued a similar capitulative statement, affirming “commitment to implementing a cessation of hostilities effective immediately.” This is either surrender or capitulation. TPLF followers can take their pick. Or Ato Yared can pick one for them.

Either the Prime Minister’s office and TPLF officials shared their drafts and agreed to use the phrase “effective immediately” or they were both told to add it. There is no way to sugarcoat the

The Three Musketeers in Bahr Dar

Is Fanno a Terrorist Force by Any Measure?

Why I Support Abrehot (Enlightenment) Library in Ethiopia, and You Should Too!