Speaking on SABC Makaziwe, Nelson Mandela’s daughter accused some journalists of racism, describing them as “vultures”

South Africa’s first black president – an icon of the anti-apartheid struggle – has been in hospital in Pretoria since 8 June with a lung infection.

Mr Zuma cancelled a visit to Mozambique to visit Mr Mandela in hospital.

Meanwhile Mr Mandela’s daughter Makaziwe said he was “still there” and responding to touch.

But she accused some journalists of being like vultures, waiting for her father to die.

Emotional crowds have gathered outside the hospital, adding messages of support for Mr Mandela, known by his clan name Madiba.

Children released 94 balloons – one for every year of the ex-president’s life – into the air in his honour.

Correspondents say South Africans now seem resigned to the prospect of his death. 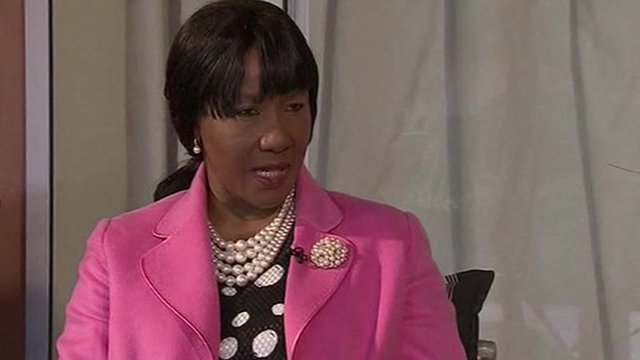 Speaking on SABC Makaziwe, Nelson Mandela’s daughter accused some journalists of racism, describing them as “vultures”

“We don’t like seeing Mandela going through so much pain, he has had a tough time in his life and he’s gone through a lot of struggle. I think this struggle should get over sooner,” Khulile Mlondleni told Reuters news agency.

“We are all going to feel bad when he passes [away], but at the same time we will be celebrating his life. He has done so many great things for this country,” said 25-year-old John Ndlovu, quoted by the agency.

US President Barack Obama, who is in Senegal, described Mr Mandela as “a hero for the world”.

“His legacy will linger on through the ages,” he said.

After visiting her grandfather in hospital on Wednesday, Ndileka Mandela said it was an anxious time for the family.

“He’s stable and we’d like to say that we thank everybody for giving their support and praying with us… we are anxious as you know that he is critical but he’s in a stable condition right now,” she said.

“It’s been hard, especially because of all of this – that we have to do everything in the public eye.”

Later Mr Mandela’s daughter Makaziwe said that while the situation was serious he was still responsive.

“He doesn’t look good, I’m not going to lie,” she said, after seeing him on Wednesday night.

“But as I say, if we speak to him, he responds and tries to open his eyes. He’s still there. He might be waning off, but he’s still there,” she told public broadcaster SABC.

She was also highly critical of the behaviour of the international media.

“There is sort of a racist element with many of the foreign national media where they cross boundaries – it’s like truly vultures waiting [for] when the lion has devoured the buffalo… we don’t mind the interest but I just think that it has gone overboard,” Ms Mandela said.

Meanwhile media reports say the bodies of three of Mr Mandela’s children are to be moved from his birthplace to his home in Qunu, where he himself has said he wants to be buried.

They include his son Makgatho, who died of an Aids-related illness in 2005.

Mr Mandela is revered for leading the fight against white minority rule in South Africa and then preaching reconciliation despite being imprisoned for 27 years. 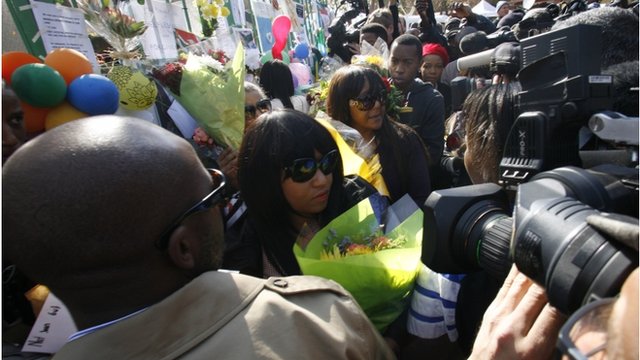 Ndileka Mandela: “A lot of comfort” in messages of support

He was awarded the Nobel Peace Prize in 1993 and was elected president the following year. He left office in 1999 after a single term.

Mr Mandela retired from public life in 2004 and has rarely been seen at official events since.

He has a long history of lung problems, and was diagnosed with tuberculosis in the 1980s while he was a prisoner on Robben Island, off Cape Town.

After his release, Mr Mandela said that the tuberculosis was probably caused by dampness in his prison cell. 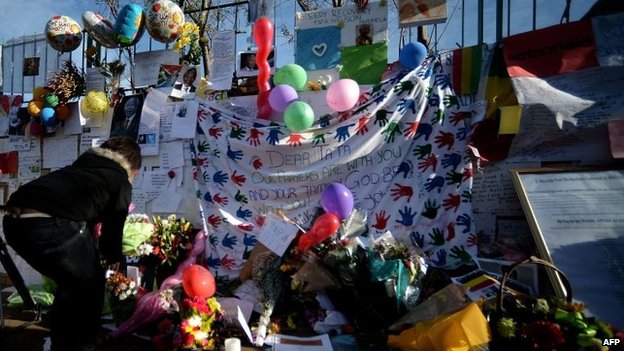