To begin with, let me remind you of one Ethiopian religious legendary story. In this story, we observe the essence of fasting. In case you want to know what fasting is in the Ethiopian Orthodox Church context, leave alone non-animal based foods such leguminous plants, it is a strict avoidance of all types of foods for at least 9 hours, from morning to late noon, in the fasting seasons. In such fasting seasons, any animal based food is completely out of the menu. 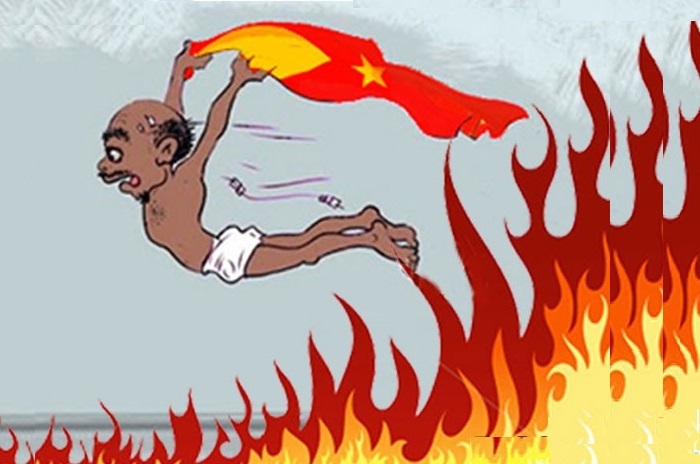 Now to the story: – It is in a certain monastery. During one of the major fasting seasons, i.e. the Lent, a monk was toasting an egg using a lit traditionally hand-made candle (made of beeswax – “ጧፍ”). That awkward monk, breaching the rules of his religious dogma, was doing that in order not to be seen by other monks and nuns. He feared the smell would reach the doors of the monks and the abbot as well if he used a frying pan along with ingredient such as onion, and hence resorted to that way of stealthy manner.

Meanwhile, the abbot was in tour and unnoticedly entered the room wherein the monk was toasting his egg with the ጧፍ. When he saw the monk, he got shocked due to the fact that he was frying the egg with a candle light during the Lent. The abbot shouted and said, “How on earth you dare do this in the Lent?” Then the monk replied, “Oh! Dear my boss, it’s Satan who misled me to do this, am so sorry….” As soon as the monk uttered those words, Satan, who was allegedly following up the story there in hiding, with much eager to know the end of the awkward monk, manifested itself in human shape and said, “You bloody liar, it is you who are teaching me now how to fry an egg with a candle. Leave alone teaching you this special skill to you, I myself don’t know whether an egg can be toasted in this way …”  The moral of the story is – sometimes, we human beings are smarter in deceiving people though we may attribute our wrongs to Mr. Satan.

Don’t make me wrong when I say that there are many sins and crimes which are committed by human beings but poor Satan is blamed for the inspiration whereas in actual fact, especially nowadays, Mr. Satan seems to be outshined by human beings in generating and applying innumerable acts of cruelty.

One of the tutors or mentors Satan should be indebted to is outrightly TPLF. This group of gangsters has from the very beginning been the son of Lucifer; TPLF is, in short, devil-incarnate, whose wickedness over outshines all kinds of brutality in our universe. Of course, it is not uncommon that students sometimes supersede their teachers. Therefore, it is not surprising if TPLF is more ruthless than its mentor Mr. Devil.

TPLF has always been anti-Amhara. The Amhara have always been the target of not only TPLF but also the so called international community led by the US. TPLF and the US government along with its allies are insatiate to spill the blood of this ethnic group. I always wonder on how a human being is against a human being with no apparent reason. I don’t know the satisfaction these entities get out of the massacre of the Amhara. We all know that man is mortal. And since all humans are mortal, I can’t understand the one who will die tomorrow kills someone today. It is sheer stupidity to me. What makes me more mournful is, the ones who are said to be erudite, the ones who should despise the glittery nature of this futile world, the ones who should obey the words of God, … are keen to get happiness in the killing of the innocent. This and such `this`s drive me crazy and due to that I get this world absolutely meaningless.

TPLF was won by some force from within Ethiopia some months back. With the help of perhaps PM Abiy and the International Community, it arose from the dead and continued invading the Amahara and Afar regions. Dead surely, it received all the necessary life support machines and provisions and armaments from both Abiy Ahmed Ali, through the Oromo warlords, and the so called International Community led by this crooked whore of our planet. The US and her culprits in the UN have been killing Ethiopia and the Amhara for the last seven months. Needless to mention, all those parties which were and still are involved in the killing of the innocent in Ethiopia will be facing the inevitable judgment from the above if not from the below, for the simple reason that no injustice remains unpaid.

The intelligence of the American government is covered with the intentional and purposeful ignorance of the Devil. According to the Holy Bible, Devil misled Eve, and Eve misled Adam. God cursed both. They came here. They produced children. One after the other. Cain came first, and Abel followed. Farmer Cain killed Shepherd Abel due to jealousy. Killing and being killed started there. It extensively continued between brothers and sisters up until now in an unfathomable magnitude in a population estimated to be nearly eight billion. Languages, races, colors, wealth, intellectual difference, religion, etc., … came late, as late as some centuries back. But all these natural and man-made differences have become bringers of their doom. Foolishness, selfishness, hypocrisy, racism, and other divisive paraphernalia deprived this world of its peace and co-existence.

It is wonderful! Conspiracy here, conspiracy there. The killing spree of both the West and TPLF is totally unquenchable. They don’t seem to be satisfied even if millions of Amharas are dead and displaced.

The US and its allies are blind when TPLF massacred the Amhara from Mekele upto near Debre Birhan, about 120 KMs from Addis. The US, a nation of double standards, is always with criminals as long as the criminals accomplish her political and economic interests. This world would have been a nice place to live in if the US were non-existent as a country with a type of lunatic government we all know. Surprisingly, this megalomaniac nation has sponsored all the devastation in the recent wave of TPLF’s campaign in the Amhara and Afar regions which included the massacre of thousands in their own residence, the raping of kids and nuns of over 85 ages, the plundering or destroying of governmental and private properties, and the destruction of almost all schools and higher institutions. The US and its allies were happy while the Amhara’s houses were burnt, their animals killed, their grains scorched, their properties looted and seared, their bodies mutilated, etc. No international organization was heard shouting about the Amhara. Every one of them was in a merry making position with the news of the Amhara massacre while on the other hand they were in tears when TPLF was about to be defeated in the past few days. A person who claims to be healthy can’t have such devilish nature. This is terribly weird eccentricity.

This behavior is absolutely satanic. And satanic behavior emanates from the religious doctrine of the Devil whose palace is in Netherworld. We know Satanism is the religion of the majority of American officials and businessmen. If they don’t worship the fallen angel, they believe, their wealth and reputation would wither away.

It is the common understanding of many people that this world is suffering from the evil instructions that come from the negative energy represented and run by the Kingdom of Darkness. You can ask scores of questions, for example. Who is responsible for the invention and distribution of all viral and bacterial diseases in favor of the establishment of the so called New World Order? Who is accountable for the death, hunger, illness, backwardness, etc. of the so called third world countries? Who is playing the role of idiocy in apportioning human beings into the categories of black and white or yellow and labeling them perfect or imperfect?  Who is changing the citizens of this world into irreligiousness? Who is changing churches into museums? Who is responsible for the accumulation of billions of dollars into the hands of the few while billions are starving and dying of curable diseases such as flu? Where are we heading to?  ….