WHO IS MELES ZENAWI 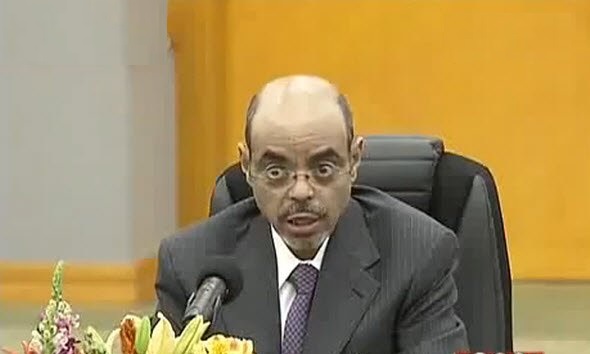 Meles Zenawi Asres (Ge’ez: መለስ ዜናዊ አስረስ Mäläs Zenawi Äsräs) died in office as the Prime Minister of Ethiopia on August 20, 2012 after a long health battle. He was born as Legesse Zenawi Asres. He changed his first name from Legesse to Meles (nom de guerre Meles, which he later adopted in honour of a university student and fellow Tigrai Meles Tekle who was executed by Mengistu’s government in 1975) while fighting the Russian supported Derg military government.

Meles Zenawi was born in the town of Adwa, Tigrai, in northern Ethiopia, to an Ethiopian father from Adwa and a mother from Adi Quala, Eritrea. He completed from grade 1 to grade 8 in just 5 years. He was awarded a scholarship to complete his high school studies in Addis Ababa (Ethiopian capital) at the General Wingate High school. Up on successfully completing his high school in great distinction, he studied medicine at Addis Ababa University medical faculty (at the time known as Haile Selassie I University) for two years before interrupting his studies in 1975 to join the Tigrai People’s Liberation Front (TPLF).

From 1985, he was the chairman of the Tigrai Peoples’ Liberation Front (TPLF), and the head of the ruling Ethiopian People’s Revolutionary Democratic Front (EPRDF).

He was President of Ethiopia from 1991 to 1995 and became the Prime Minister of Ethiopia in 1995 following the general elections that year, and has been serving as prime minister until his death on Aug 20, 2012.

Amazing Biographies Of Abel Tesfaye, aka The Weeknd