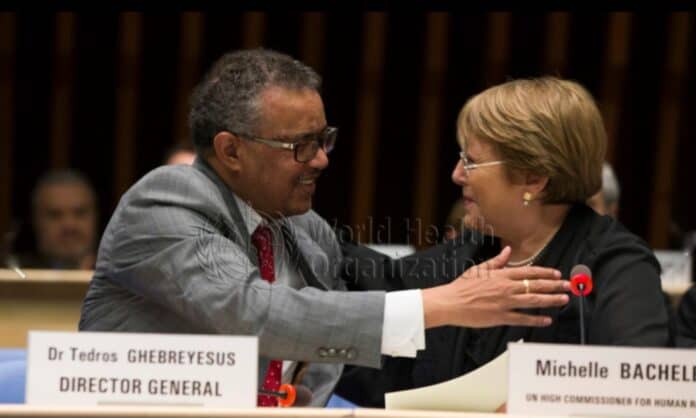 In his weekly conference from Geneva today Dr. Tedros Adhanom told the world  that he is worried about “ongoing war” in  his home region Tigray, Ethiopia.
https://m.youtube.com/watch?v=RKsftKVR40U&feature=youtu.be
He claimed that there is no communication to reach his brother and other family members according to him the war is raging in Tigray. We heard similar allegations from his close friend, Michelle Bachelet Jeria, the human right commissioner of the UN.
WHO lobbying has indeed paid off to misinform the international community. Furthermore Tedros has used his office doing PR for his defeated party, stopping the war in Tigray !!!!
Tedros who he said in the past is on the side of “peace” not taking sides, Ethiopia vs TPLF has shown the world he is worried for TPLF buddies who are not picking their phones.
He has indeed looked worried. We all see the stress on his face we never saw for the last one year during Covid19 pandemic press conference.
He is not getting the regular update from his TPLF buddies who assured him in the past of the coming victory. Most of them might not be alive and that is what we read from his face. No one is there to return his call.
For the people of Tigray life is  returning to normal slowly. We see public meetings throughout Tigray chaired by the provisional administration of Tigray.
Internet, transportation etc including Ethiopian Airlines is back. I am sure he knows desperately needed food and medicines are reaching Tigray. The news is there.
Many lives were lost in Tigray. We lost thousands knived by TPLF samre at  Maikadra and thousands Ethiopian Defense Force members ambushed by TPLF special forces. Civilian loss is avoided thanks to the patience and skill of those who were in charge of the operation.
Dr. Tedros Adhanom from his brief comment made the rest of the world know what we have known. He is on the side of TPLF and he doesn’t care about the huge humanitarian cost his TPLF war criminals inflicted on the army and innocent Amhara seasonal laborers. He is only counting the TPLF loss.
The mention of Ethiopia as his country is a card he is pulling as WHO director to secure his second term.
A man who is not standing with Ethiopia should not get a second term representing we Ethiopians and the rest of Africa.Ethiopia should rally all African countries to make sure Tedros Adhanom term to end as one term director of WHO.
301
SHARES
FacebookTwitter

If truth be told, America’s foreign policy in Ethiopia is hypocritical and dishonest!