Today we are not talking about the infamous Jawar Mohammed whose involvement with the 2020 massacre of Amharas and Christians in Arsi, Bale, Hararghe and Jimma is still controversial. 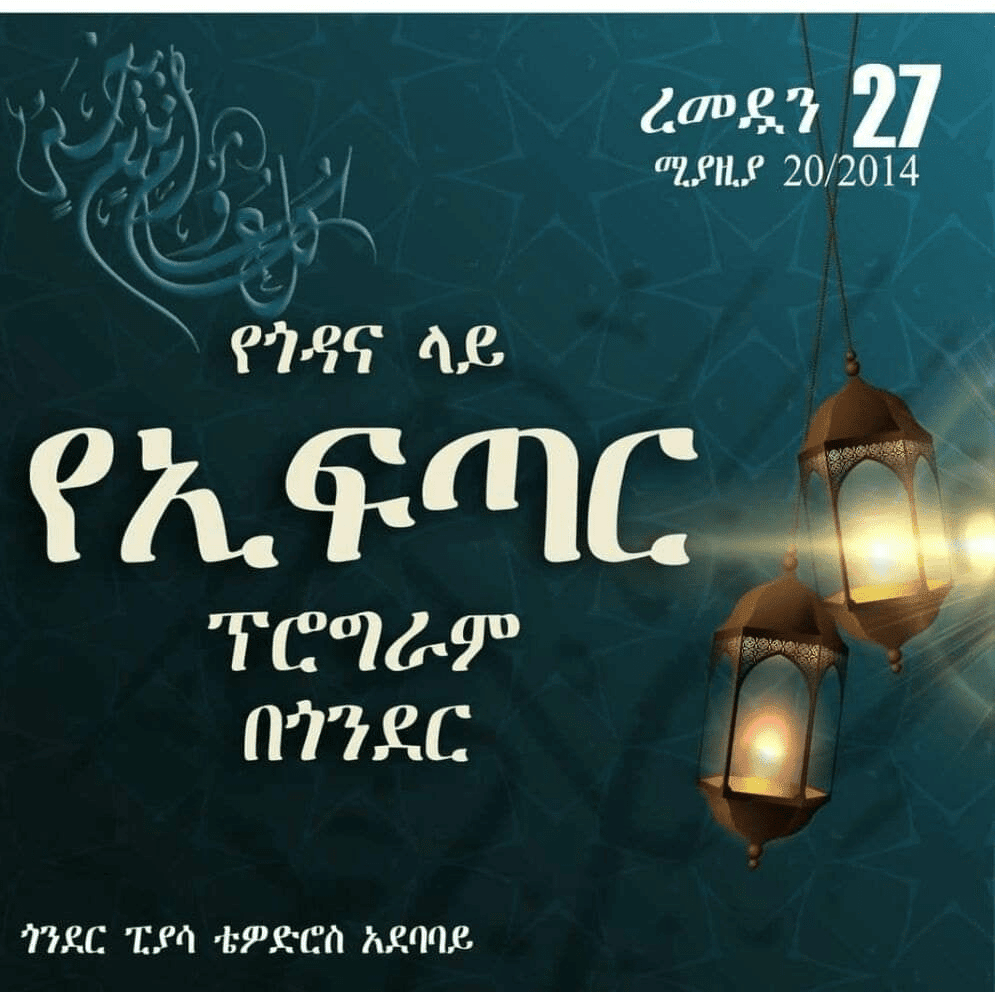 Still, Jawar Mohammed could claim ownership of the patent for the strategy that uses Gondar Muslims as a focal point to incite a religious earthquake to shake the foundations of the Ethiopian state. This is on two levels. First, it was Jawar who told Gondar Muslims half a dozen years ago that they should primarily support the formation of an Islamic Oromo State as a bulwark of Islamic solidarity in the region.  Secondly, the aim of the end-of-Ramadan religious terror was not just to cause a religious rift among the Fanno. It was indeed a systematic operation to assist the Abiy government with its intense campaign to destroy Fanno*. It is clear that the campaign was utilizing the 3 ‘D” tactic outlined by Jawar: Define, Defame and Destroy. Practicing what he preaches, Jawar has used his party, the OFC (Oromo Federalist Congress), to issue successive declarations that go out of their way to falsely accuse and vilify Fanno.  Additionally, Jawar is also using his media, OMN, to carry out a sustained and intense defamation campaign against Fanno. Even though it failed miserably, the whole Ramadan episode was aimed at discrediting and defaming Fanno as well as creating a religious rift among its members. 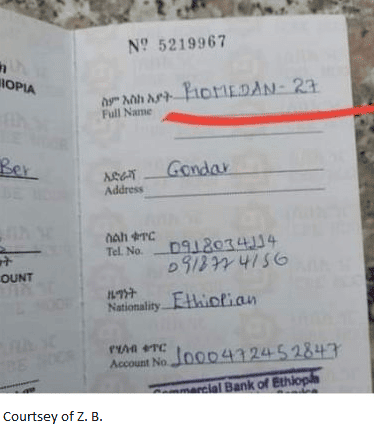 The Jawar Mohammed we are discussing today is a different individual.

Jawar Mohammad Hagos, a TPLF agent in Gondar, was assigned to open a bank account to finance terror in Gondar in the month of Ramadan. Under whose auspices he was operating is not yet clear as his activity was supported by and advertised by Muslim Oromo as well as other Wahabi clerics. The pretext of the fundraiser was to sponsor a street Iftar, breaking of the fast. Street-Iftar is a very recent phenomena that is completely strange to the Islamic worship tradition in Ethiopia. In fact, the chief Muslim cleric of Ethiopia, Haji Mufti, has stated that a street-Iftar is un-Islamic.

The bank account opened in the Commercial Bank of Ethiopia under the name of Ramadan 27, an Ethiopian Citizen, for people to send their donations to. This account was advertised by major Oromo, SilTe and other Muslim clerics sponsoring the Gondar Terror project. While 27th of Ramadan is regarded as night of blessings and sin forgiveness by Moslems, the name was being used by sinister elements to bring terror and havoc to the city of Gondar and to Ethiopia at large. But these people have been known to go against the tenets of Islam for political ends.

The clash happened as planned and extremist Muslim Oromo clerics like Ahmedin Jebel and Silte clerics like Mujib Aminio led the uproar. These same clerics were dead silent when Amhara Moslems were machine-gunned during worship in a Gura Ferda mosque. Neither were their voices heard when Amhara Moslems were massacred and mass-buried with excavators in Benishangul-Gumuz. Once the Gondar conspiracy was uncovered, the said Jawar Mohammed Hagos and all his family members were flown out of Gondar. In Gondar, during the clash, Mosques were attacked and both Moslims and Christians were killed. 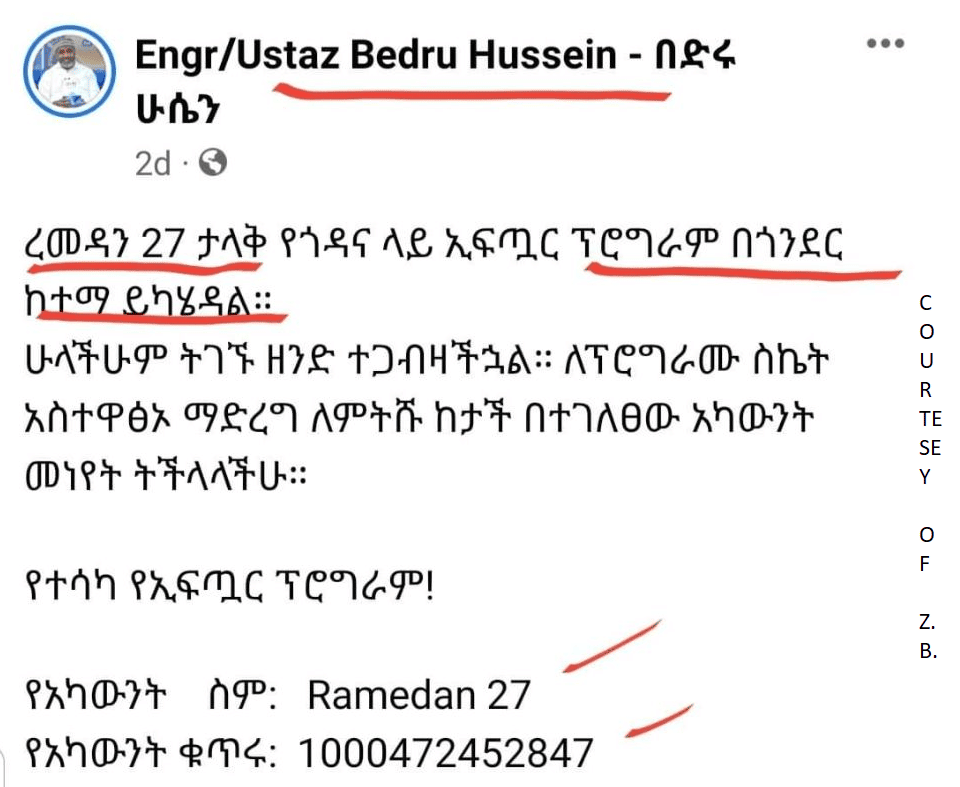 The Eid program to create havoc was first announced by Abiy Ahmed himself in a call in parliament. Abiy intentionally abused the name of Meskel Square (Square of the Holy Cross) as he called on all Muslims to converge on it for Eid celebration. It was clear from that moment onwards that some major conflict was being planned. Subsequently, Abiy publicly admitted that he was a Moslem in the guise of a Christian.

One thousand kilometers away, several churches were burnt down and a huge SilTe mob marched on an open fenceless university to attack Christian college students from out of town. The orthodox church was prohibited from sending a team to investigate the situation and visit the beaten university students.

While many have been arrested in connection with the clash in Gondar, the main proponents of the Wahabist terror, such as the SilTe cleric and activist Mujib Amino, roam free.

The Silte are Muslim Guraghes whose survival and prosperity are largely dependent on the Christian patrons of their business. The Silte elite and business class were yesterday said to have chosen to ally with the TPLF government to benefit unjustifiably. Today, there are glaring signs that they have chosen to ally with the OPDO government against the Ethiopian oppressed. Will this be tenable?

While it is Oromo Muslim clerics who are some of the prominent Wahabis, why are some SilTe figuring as the main anti-Christian forces?

OPDO elites’ appetite to gobble up everything is unparalleled in Ethiopian political history.

The OPDO elite, which prides itself with its ability for intrigue and gamble, seems to have chosen to wear the SilTe mask for two reasons. The SilTe predominate the business landscape of post-TPLF Ethiopia and OPDO seems to be targeting two birds with one stone. By pushing the SilTe to feature prominently as the main haters of Christianity, OPDO aims to ruin their business prospect.  It is estimated that SilTe business people own almost 90 percent of the businesses that operate out of store fronts rented from the Ethiopian Orthodox Church buildings.

Just as the TPLF aimed and succeeded at pushing the Christian Guraghes out of their business prominence, the OPDO is poised to do the same to the Muslim Guraghe, the SilTe mainly.

We should all ask, “Whatever happened to Jawar Mohammed Hagos?”

Have any legal charges been brought against him? Was he operating under orders from TPLF or OPDO? Did his instructions come from Meqele, Arat Kilo, Jimma, Cairo or Jidda? As the BBC was busy disseminating falsified propaganda, is there any role at all for London in this turmoil?. Or is there some joint task force responsible for such crimes? Once the involvement of Jawar Mohammed Hagos was exposed, why was the whole issue hash-hashed by the government media?

Finally, the Ethiopian people owe a great deal to the individuals and media organizations that uncovered the forces behind the sinister attack on Muslim and Christian people and places of worship at the close of this year’s Ramadan fast.

The bombshell in our title seems to have been aimed at Fanno. We can say it was dropped but, for some strange reason, hissed loudly but failed to explode. Or did it? Though the TPLF-OPDO-Wahhabi collaboration on this Fanno defamation project had taken many by surprise, its objective has now been exposed by the subsequent nationwide campaign to destroy Fanno.

*Fanno is a millennia-old institution where ordinary Amhara civilians arm and organize themselves to defend their community against outside invasion. Fanno figured as a major bulwark to stem the tide of TPLF’s invasion last year when Amhara communities sustained heavy causalities in the wake of fleeing government forces. As Fanno has no religious affiliation whatsoever, there are Muslim, Protestant and Orthodox Fannos.

3 thoughts on “Jawar Mohammad and the Gondar Bombshell”