Israel has promised that if any of the Ethiopian immigrants airlifted to Israel in recent months during an intensifying war in the African country are found to have committed war crimes, they will be sent back, Channel 13 reported on Tuesday.

The unsourced report comes a day after the channel reported that Ethiopian Prime Minister Abiy Ahmed angrily complained in a phone call with Prime Minister Naftali Bennett that some of those airlifted to Israel were officers involved in war crimes.

Channel 13 cited a security source involved in the matter as saying at least four officers — among the over 2,000 people brought to Israel over the past year — are suspected of taking part in rebel massacres in the Tigray region.

Tuesday’s report did not say how Israel plans to establish if the men were involved in war crimes. It also noted that Israel may have trouble determining the true identities of many of those airlifted to the country, saying they did not have passports or identity documents and many gave the same birthdate, April 1, leading officials to conclude they were provided with false information.

Pressure has been ramped up on Israel in recent weeks to bring thousands of members of Ethiopia’s Jewish community to Israel, as an insurgency by Tigray rebels intensified and neared the capital, Addis Ababa. “We must continue to bring them over to Israel quickly,” President Isaac Herzog said last week.

Those included in the agreement have first-degree relatives in Israel and were eligible to immigrate under a 2015 government decision, under which 9,000 people would be brought to the Jewish state.

The Haaretz daily said Tamano-Shata, who herself is of Ethiopian descent, threatened Monday to quit her post if no more people are airlifted.

That report added that Bennett will convene a meeting in the coming days to establish policy on the matter. The meeting will be attended by Shaked, Tamano-Shata, and Defense Minister Benny Gantz.

The Channel 13 report said that those slated to be brought to Israel are in no immediate, concrete danger due to their Jewishness.

There may also be doubt as to whether they are all Jews, after Hebrew media reports said Sunday evening that dozens of Ethiopians participating in the secret operation may have misrepresented their Jewish ancestry and exaggerated the danger posed to them. An investigation by the Immigration and Population Authority raised “serious doubts” regarding the vast majority of a group of 61 Ethiopians brought to Israel over the last several months.

Members of the community involved in the effort denied the accusations, according to Channel 12 news, which also published an assessment from the National Security Council claiming that there was no urgency to airlift efforts. 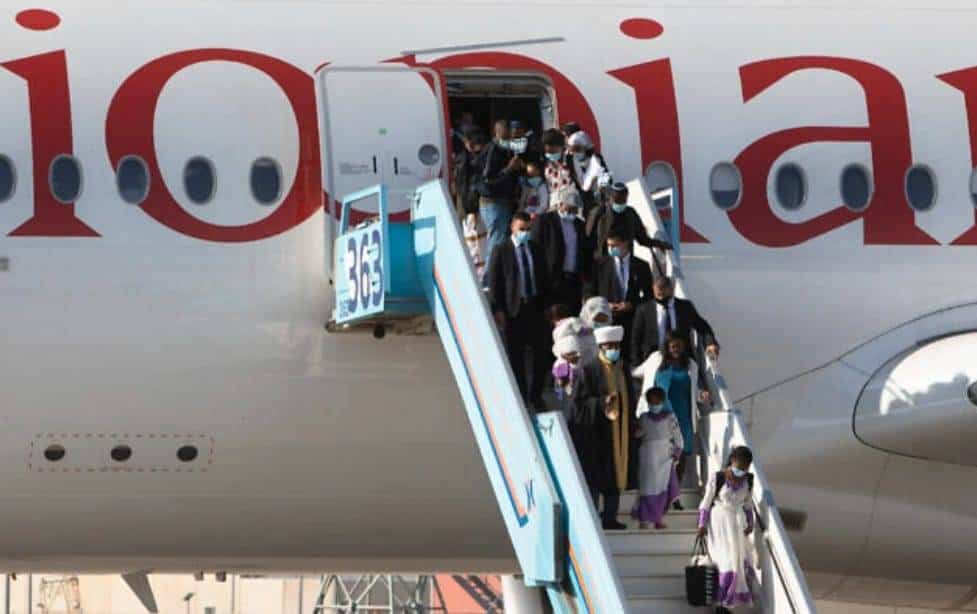 Since fighting broke out a year ago, over 2,000 Ethiopian Jews have been brought to Israel in state-run operations, among them the group of 61, who needed ministers to sign off on their immigration because they are not part of the Jewish community, claiming only Jewish roots.

Though the plan to spirit them to Israel was put together during the tenure of former prime minister Benjamin Netanyahu, it was the cabinet of his successor Bennett that signed off on it, Haaretz reported.

There are thought to be 7,000 to 12,000 Ethiopian community members still waiting to come to Israel, many of whom live in the Tigray region, at the heart of the conflict. Others, who left their villages years ago, eke out livings near the Jewish community centers in Gondar City and Addis Ababa. Many have been waiting for decades to immigrate.

While Ethiopian Jewish immigrants from the Beta Israel community are recognized as fully Jewish, immigrants from Ethiopia belonging to the smaller Falash Mura community are required to undergo Orthodox conversion after immigrating. The Falash Mura are Ethiopian Jews whose ancestors converted to Christianity, often under duress, generations ago. Some 30,000 of them have immigrated to Israel since 1997, according to the Prime Minister’s Office.

Because the Interior Ministry does not consider the Falash Mura to be Jewish, they cannot immigrate under the Law of Return, and therefore must get special permission from the government to move to Israel.