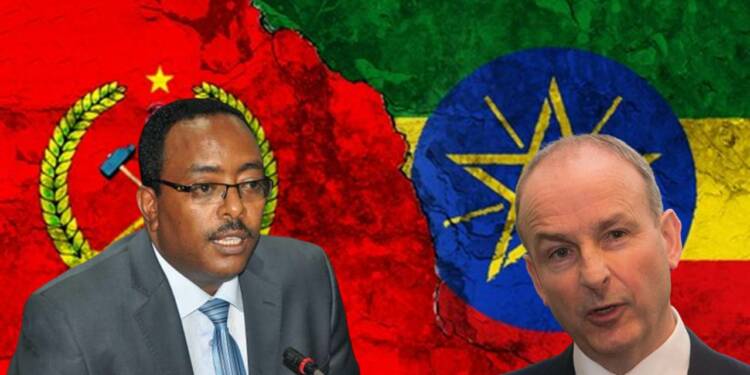 Due to Ireland’s anti Ethiopia stance over the two-year long Tigray crisis in the country’s northern region, Ethiopia has threatened to reconsider its diplomatic relations with Ireland, accusing the EU member state of threatening its “sovereignty and territorial integrity.”

Ireland, which currently holds a seat in the 15-member UN Security Council, has been diplomatically present in Ethiopia since 1994.

The warning comes as international efforts are in place to bring the Ethiopian government and rebels in Tigray to the negotiating table to end a savage war that has killed untold numbers of civilians and sparked a serious humanitarian crisis.

Redwan Hussein, NSA to the Prime Minister Abiy Ahmed, took to twitter on saturday where he stated, “Ireland has been barbing and undermining Ethiopia incessantly in its real earnest for the last 2yrs,”

“(The government’s) plea made for the umpteenth time has been rebuffed & unheeded. Hence obliged to send an official ultimatum this week for Irish government,” It is important to note that the TPLF panicked during 2018 when Ethiopia began to experience democracy. Since then, it has taken hostages in the Tigray region, including Ethiopians.

It has assembled a fighting force and enlisted kids to serve in its armed forces. As you are aware, the TPLF then launched an especially brutal assault on the Ethiopian northern command on November 3, 2020. Thus, it started the conflict between the Government and TPLF. TPLF launched yet another attack in response to every confidence-boosting step taken by the Abiy’s Government. The Ethiopian government had also agreed agreed to take part in the peace negotiations after being invited by the African Union.

Ethiopia is dedicated to finding a peaceful solution to the dispute. Investigating claims of human rights and humanitarian law abuses during the crisis is another priority for it.

The Ethiopian Government in its statement stated, “Ireland could have supported these forward-looking measures and political and economic reforms in Ethiopia. Instead, Ireland has continued attacking Ethiopia using its membership in the UN Security Council, the European Union, and elsewhere.”

It is known that Europe is not ready to give up on fuelling the war in the region. It is seen in the past that the EU has been involved in aiding the TPLF indirectly through aid. TPLF which is based out of the Tigray region has always had a continued supply of weapons and ammunition. The support of TPLF regarding the arms and ammunition is also pointing fingers towards the West which is known for arming the rebels for its own interests in far-flung nations. The West is not the sole perpetrator in this conflict but the seeds of this conflict were sown by the previous Tigray regime only.

The amassing of arms in the Tigray region by the previous Tigray ethnicity-dominated government had a strategic significance. The Tigray government utilized the nation’s resources to strengthen its control over the Tigray Territory and may use the region to start a conflict if it loses power in the future which is true today. When Abiy Ahmed took office, the same thing took place. The TPLF disseminated the lie that the new administration wanted to wipe out the Tigray people from the region and launched an offensive against the Ethiopian government that is still ongoing.

Due to a variety of misinformation efforts and communication breakdowns, it is difficult to verify the real time news of this conflict. However, it is known that the TPLF generals’ new plans to quickly conquer the strategic locations have failed miserably due to the resistance by joint forces of the local Amhara fighters and the Ethiopia National Defense forces.

It is clear that TPLF has been nearly neutralized in the region but the West still has the capability to revive it through various aforementioned means. This is the reason why Ethiopia is now attacking the root cause of the conflict which is the West. After the appointment of Prime Minister Abiy Ahmed to the office, Ethiopia is aggressively trying to end the conflict and it has now warned the West that this proxy game to control the Horn of Africa will not work anymore. The message to the West is clear that either it removes its proxies from Africa or watch its influence and interests get annihilated.