ADDIS ABABA- Over 60,000 ethnic Amharas were killed by TPLF during the past 40 years in Welkait Tegede, and Telemt areas, the University of Gondar (UoG) research group announced.

The finding of the research that the group conducted has shown as the number of people massacred, displaced and made to disappear is equivalent to 75 percent of the total population. 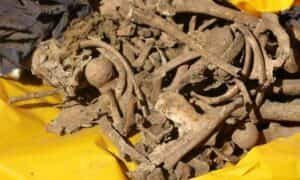 The research group Head and Public Health Lecturer at the University, Geta Asrade (Assistant Professor) told the Ethiopian Press Agency (EPA) that 12 mass graves have been discovered in the Welkait Tegede, and Telemt areas whereby TPLF had a four-decade repressive control. Following the liberation of these areas from the terrorist group, mass graves and hidden prisons have been identified while further research is still ongoing in the areas.

“We have conducted the research by assessing mass graves and by interviewing survivors. Accordingly, we have found that the whereabouts of 19 percent of family heads is still unknown after TPLF took them to prisons.” Also, 25 percent of ethnic Amharas were killed while 29 percent of them were forced to leave their homes….The research group has a preliminary information that the disappeared people were buried in a cave called Bado Sidist which was also a hidden prison of the TPLF.”

Residents were met with severe consequence only for talking about the TPLF’s atrocities in the area. So, residents had been exposed to psychological pressure for the last 40 years, Geta elaborated.

“To be frank, eyewitnesses are still afraid to talk about the entire atrocity and they are unhappy to indicate locations of mass graves, but we have retrieved the information through time. After all, we have discovered sites of some mass graves in places called Adino. Ghanem, across Tekeze River, Telemt- FiyelWuha, and inSeytan Meta. …we also have information that three mass graves are located in Dedebit, Tigray State.”

According to him, the discovered mass graves are located in the mountainous areas thereby inhabiting road and other communication access to reach local residents and survivors. Overcoming the hurdles, the researchers group managed to approach the local community and survivors of TPLF’s atrocities and obtain their account.

One of the mass grave sites is named by locals Ghanem (Hell) denoting the bitterness of the site that served as TPLF’s prison and mass grave. It is difficult to determine the exact number of people executed by TPLF forces as the majority of the grave sites are located along river sides thus the remains are likely to be taken by flood, the head remarked.