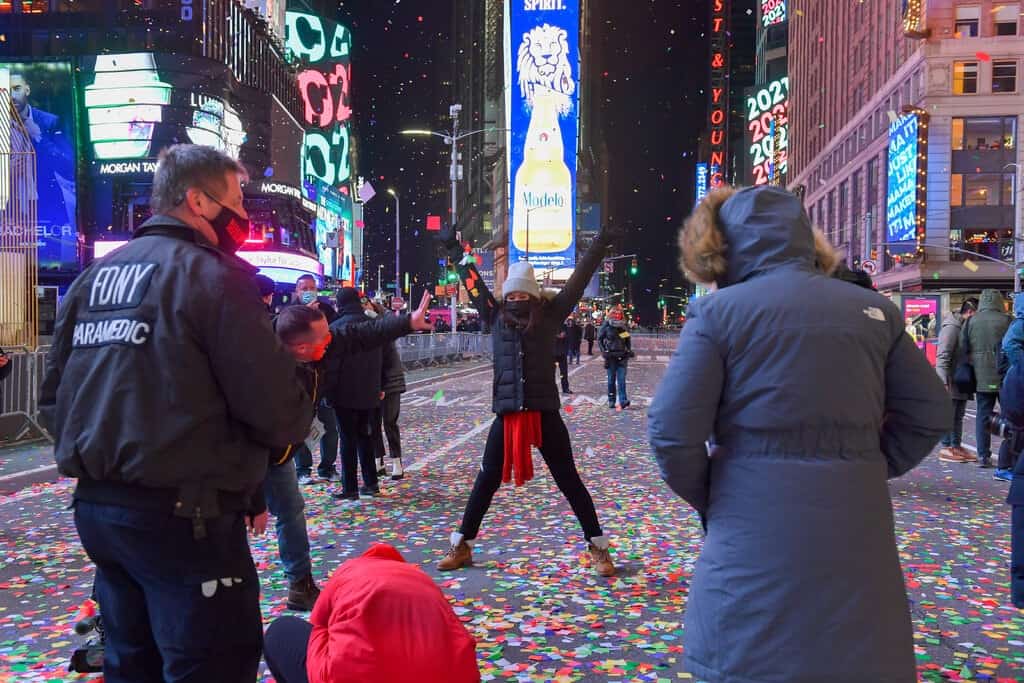 Cities from Sydney to Stockholm to Chicago eagerly welcomed the arrival of a new year after one filled with sickness and separation.

The World Says Goodbye to 2020

Every year on Dec. 31, the approach of midnight finds us drawing a line in time. The way we do this varies — we eat black-eyed peas, or fling open the windows, or run into an icy ocean — but the idea is always the same. On this night, we put something behind us and seal it off, so it is part of the past. And then we try to begin again.

It is difficult to imagine any year when our need of this ritual has been greater. Many of us have lost those dearest to us, and absorbed those losses in isolation. Livelihoods have been wiped away like vapor from a window. And yet, without the fireworks, the giddiness of crowds, we have never been so constrained in our rituals.

That does not mean we are not celebrating. Inside lighted rooms, we raised glasses to the people who sacrificed for us, to the triumphant performance of our health care workers, and to a thousand small kindnesses already receding from memory. Yeah, yeah, the end of a year may be an illusion, just a way to trick ourselves into keeping going. But we made it. 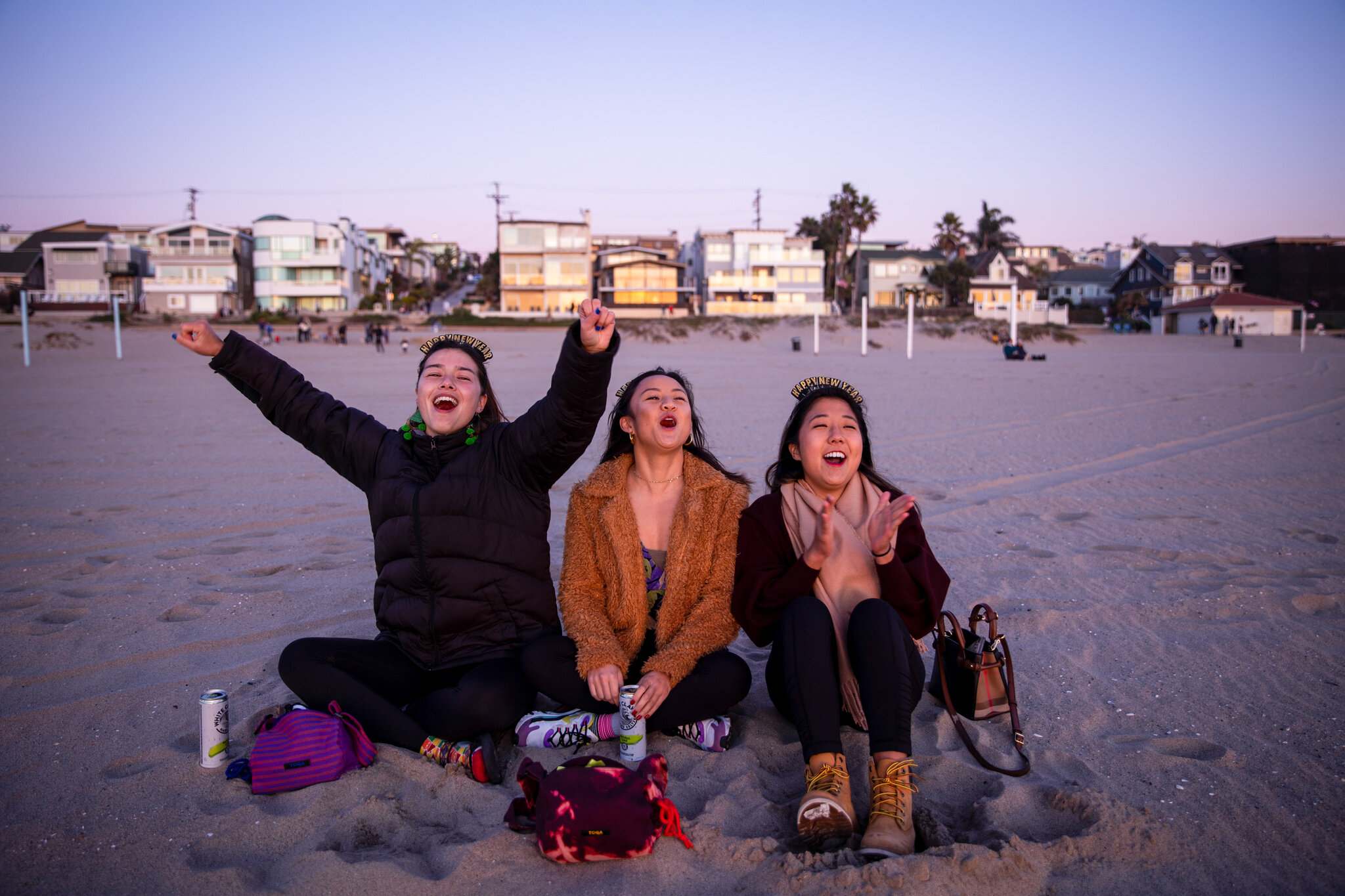 In the grip of a pandemic that has disrupted lives, the economy and even milestones, many Americans eschewed the customary trappings of New Year’s Eve festivities for subdued observances, much as they have spent much of 2020 — away from loved ones, in virtual settings or alone.

Replaced were the soirees of previous years, the prix fixe dinner seatings, open bars and streets crowded with revelers. Times Square was empty, a most jarring image of how so much has changed since the last ball drop.

In another Manhattan — Manhattan Beach, Calif. — Kara Maeda and her two roommates said they were content to spend a low-key night at home, drinking White Claw and eating sushi. They said the past year had changed their perspective and priorities.

“This year,” Ms. Maeda said, “we really slowed down and think about what really matters.”

Ms. Maeda, 26, a marketing analyst, said she was eager to turn the page of the calendar.

In New Orleans, April Lee Fields, an artist who dabbles in witchcraft, gathered with four friends. She said they planned to draw tarot cards and livestream spoken-word poetry and songs, along with making a fire to burn away things they wanted to rid themselves of.

“You can call it witchcraft if you want or just being a conscious human being,” she said.

Ms. Fields, 33, said she would never take everyday things for granted again after the pandemic, from air travel to large gatherings.

“I value my independence,” she said. “With a pandemic, that’s put a restriction on that.”

Ms. Fields said that earlier on Thursday she spoke to relatives and friends in England on Zoom. But some New Year’s Eve traditions were not broken, like when a friend asked her if they were getting dressed up.

“I was like, mate, we just spent a year in our pajamas,” Ms. Fields said. “We’re going to dress up.”

In Denver, Alison Stine, a novelist and journalist who moved from Ohio in August, shared a similar mantra.

“I put on makeup for the first time in a long time,” Ms. Stine said.

Earlier in the evening, Ms. Stine helped organize a Zoom call to celebrate the birthday of her son, Henry, who turned 10 on Thursday.

“It’s been really hard moving in a pandemic, especially for him to make friends,” Ms. Stine said. “It’s really hard to meet new people over the computer.”

Ms. Stine, 42, said her son wore a funny hat and played the video game Among Us with his friends. Later in the night, they planned to light sparklers and eat takeout sushi, her son’s favorite.

“That’s what we have right now,” she said, “these small moments.

The minute before midnight in Times Square was almost unrecognizable as New York City closed out one of the most difficult and wrenching years in its history.

This time there were dozens — not hundreds of thousands — of voices counting down from 10 seconds. Confetti still rained down, but the multicolored strips landed primarily on the pavement rather than people’s shoulders. Instead of a steady rumble of cheers and screams, there were infrequent cries of happiness amid the booms of fireworks.

But the muted celebration did not ruin the palpable excitement of visitors in the area.

Alexis Hurley of Hell’s Kitchen grew emotional on a nearby street as midnight approached. “This has honestly been the worst year of my life and a lot of my friends’ lives,” Ms. Hurley said. “It’s just this relief and hope that things will get better.”

In the hour before 2021 started on the East Coast, Pitbull, Jennifer Lopez and Andra Day were announced to the stage at Times Square to relative silence. Outside a nearby hotel where performances could be spotted on a digital screen, small clusters of about 70 people total were gathered to catch a glimpse of the acts.

Beth Calve, 60, and her daughter, Lily, were among the crowd and debating whether to brace for the frigid temperatures until the ball dropped. They ultimately chose to stay.

In a typical year, Ms. Calve said, the two would be building gingerbread houses and playing games at their home in New Jersey. But this time, because of the smaller crowds, they decided to spend the evening near Times Square. (The two had tried to persuade officers to let them past the entrance to no avail.)

“I just want Covid to finally be over,” she said. “I don’t even know what else I’m hoping for. It’s just that.”

Blocks from Times Square, streets were filled with energy as New Yorkers and tourists carried silver and gold balloons. A crowd around one saxophone player threw sparklers onto the ground; farther down the street, people danced to “Raise Your Glass” by Pink. The end of a year as dark as 2020 merited a celebration.

For just about every New Year’s Day since 1958, Carla Hall has situated herself on a patch of asphalt in front of a car dealership in downtown Pasadena, Calif. To a 10-year-old girl, it was the perfect spot to watch the majesty unfold — the “artistry” she calls it, of the floats and the marching bands, the beauty queens and horses.

“All that love that goes into it,” Ms. Hall, 72, said this week, tearing up at the memories. “I’m going to start crying, sorry.”

In a small gesture of defiance in the face of trying times, she will be there this year, too, wearing her mask, and marking her spot, as usual, with chalk and tape.

Of course, there will be no Rose Parade, a Southern California institution that began in 1890. It was canceled months ago, just like everything else. But now its absence is finally here, to officially enter the ledger of things lost to the coronavirus pandemic.

Even the superlatives that have attached themselves to the parade (“America’s New Year Celebration”) and the accompanying football game (“The Granddaddy of Them All”) don’t seem to fully capture what the day has meant to Ms. Hall: family, community, tradition, something to rely on.

For Ms. Hall, a substitute teacher who has not worked since March, who has lost friends to the coronavirus, and who has seen two of her grandchildren catch the virus and recover, the loss of the parade feels like a metaphor for grief itself.

“See you at the Rose Parade,” is what everyone said to everyone, every year.

The only other time the parade was canceled was during World War II, amid fears that the West Coast could be attacked by Japan. Even on New Year’s Day in 1919, with an influenza pandemic raging out of control but overshadowed by World War I, the parade went on, as unwise as that was.

As a placeholder in the parade’s long history, there will be a television special this year — filmed in recent weeks in strict accordance with virus protocols — for which Ms. Hall was interviewed. The Rose Bowl football game was moved to Arlington, Texas.

Robert B. Miller, who has volunteered for the Tournament of Roses Association for almost 40 years, and was named president in 2020, said the association would donate money it would have used to host the parade to food banks and organizations working to close the gap in access to broadband between rich and poor schools.

“My priorities have always been my family, my work and the Tournament of Roses,” said Mr. Miller, who will be on the sideline in Texas for the Rose Bowl, dressed in his traditional red sports jacket.

He said he hoped the television special would serve as “a means to help people process what’s happening, be grateful for what they have and where they are going and know that the world will return to something much more akin to what we all experienced before.”

To ring out a year the world wishes had been an illusion, the biggest event in Paris really was one. It is called, perhaps optimistically, “Welcome to the Other Side.”

From within a virtual Notre-Dame Cathedral — a resurrected, reimagined version of the fire-gutted treasure — the city livestreamed a computer-generated concert and light show, with no one actually inside the cavernous landmark, and no crowd outside.

Most people now living have never seen a year that Europe, like much of the world, was so eager to bid good riddance to — or so unable to send off with any fanfare. Vaccines are the first real rays of hope, but the coronavirus still reigns unchecked, a new variant is stoking new fears, and much of the continent is under some form of lockdown.

Concerts? Canceled. Crowds and parties? Banned. Staying out all night? Don’t even think about it. Across Europe, where Covid-19 has killed almost 600,000 people, cities and nations sent the message that the only acceptable place to spend New Year’s Eve was at home, and they tried to arrange enough spectacle broadcast or online to keep people there.

Thousands usually flock to Las Vegas to spend New Year’s Eve at hotels and casinos on the city’s famous strip. But as in many American cities, things look a lot different this year.

Casinos and restaurants are still open with limited capacity, but some fireworks shows were canceled. Tickets for a downtown event — complete with a light show and a zip line — that had been expected to attract about 14,000 people were refunded this week after consultation with health officials. Now only those staying in certain nearby hotels were allowed access.

Contribution of politics for underdevelopment of Ethiopia