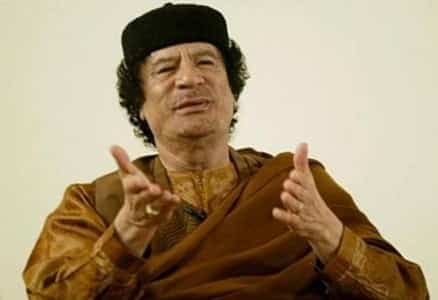 The two men, both among the world’s longest serving leaders, agreed in talks in Tripoli on Wednesday that the 53-nation African Union (AU) should be turned into an embryonic federal government at an AU heads of state summit in Ghana on July 1-2.

“They consulted on the upcoming African Union summit due to be held in Ghana, and in relation to this they emphasized the establishment of the African Union government,” Libya’s official Jana news agency said.

“This plan embodies the hopes and ambitions of the continent’s people, and the only means for the continent’s independence, political and economic freedom and progress and development,” it added.

Gaddafi has long favored the establishment of a United States of Africa as a means of ridding the continent of 800 million people of what he calls Western colonialism.

The project attracts emotional support from some in Africa since the idea of a federal United States of Africa was first promoted by Kwame Nkrumah, Ghana’s first president and pioneer of Pan-Africanism, but many doubt its practicality.

The topic is due to be debated at the Ghana gathering, which will take place 50 years after Ghana became the first black nation in sub-Saharan Africa to win independence.

Jana said the two leaders also discussed a number of other issues but did not elaborate.

There was no mention of energy ties between Zimbabwe and oil-producing Libya.

Zimbabwe had received oil from Libya under a $360 million loan facility which the southern African country was meant to repay in part by supplying agricultural produce to Tripoli, but the deal collapsed in late 2002 after Harare failed to meet its obligations. The facility, which covered 70 percent of Zimbabwe’s fuel needs, had run for less than a year.

Zimbabwe is in the midst of an economic crisis that has produced the world’s highest inflation rate of above 3,700 percent, unemployment of around 80 percent and chronic shortages of food, fuel and foreign currency.