The global trade in khat is worth hundreds of millions of dollars a year and in one Ethiopian town daily life centres almost entirely around the drug.

Drive along any road between Ethiopia, Djibouti and Somalia and you are likely to see pick-up trucks, piled high with bundles of fresh green leaves, hurtling past you at terrific speed, horns blaring, lights flashing.

Land at any airport and you will see planes stuffed with the same green leaves, being unloaded at a frenzied pace.

Whether there is war, drought or famine, the leaves get through. The khat industry booms.

I used to wonder where all this khat was coming from. Now I know.

The small town of Awaday is in between Ethiopia’s most holy Muslim town of Harar and its big eastern city of Dire Dawa.

I first arrived in Awaday late at night. Unlike the other towns I had passed through, it was not quiet, dark and asleep. It was wide awake and madly, crazily busy. 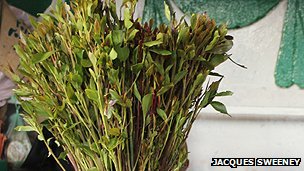 Every scrap of pavement, every building, room and shack was devoted to the sorting, the weighing, the bundling and the selling of khat. There was a fresh, slightly bitter smell of vegetation.

I stood on floors which were soft, smooth and silky with glossy discarded leaves. Man, woman and child sat on these floors, rapidly chopping stems, picking through the leaves to choose the most succulent and tender.

There was something medieval about the process. Nothing was mechanised. Everything was done by hand.

Delicate weighing of the highest quality leaves – which fetch tens of dollars a bunch – was done with tiny brass weights on metal scales.

In each and every room, a man sat with a giant ledger, carefully noting down weights, prices and other figures.

“This is the khat capital of the world,” one man told me. “This whole town is a khat factory.

“We harvest the leaves from the fields nearby, then we rush them to Awaday for sorting and pricing. This is our khat stock exchange.

“We all work from late afternoon until three of four in the morning. Only then do we rest.”

In the middle of Awaday is a large five-storey building, the biggest I could see in the town.

It is devoted entirely to khat and is divided into small rooms, where people prepare the leaves for transporting all over the world.

The vehicles waiting on the road with their engines running reminded me of racehorses straining at the bit, before the starting bell. As soon as they are filled with khat, they race off into the night.

“This one’s for Djibouti, this for Somaliland, Dire Dawa, Addis Ababa, London, China.”

The reason for the speed is that khat has to be fresh.

Wherever possible, it must be on the market before noon the next day. Otherwise, as one devoted chewer told me, “it loses its deadliness”.

I spent time with some chewers the day after I visited Awaday. 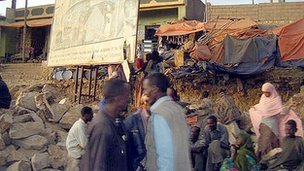 During the day Awaday takes on slower pace

They were known by their Somali nicknames of “Black Hair’, “Big Nose” and “Round Mouth”.

There is quite a ritual to chewing khat, which is usually done sprawled on the floor, preferably on a carpet or blanket, with cushions to lean on.

Soft drinks, water and tea are placed before each chewer, together with a large bundle of khat, a bin for the stems and a cloth for wiping sweat from the brow.

The session starts quite slowly.

There is not much conversation as packing the leaves and stems into the mouth and chewing them are the priorities.

After an hour or so, spirits lift, tongues fly and arms wave about. There is a lot of talking, planning, analysing, arguing and joking.

Business deals are made. Political problems are solved or created.

As the hours spin by, and the chewing subsides, the mood shifts downwards.

Eyes take on a glazed expression. Irritability sets in, and sleep refuses to come.

It is here that I see shades of what psychiatrists and others describe as the destructive side of khat, which they say can lead to serious mental health and other problems.

The next time I visited Awaday, it was daytime.

In this upside-down town, where people work through the night, there was hardly anyone on the streets.

All the doors were closed. Everybody was asleep.

There were a few goats trotting about, and a few dried khat leaves in the dust, the only reminder of the frenzied night-time activity.

I could not help thinking that khat is being grown in an area affected by drought and shortages of food.

It is being delivered fresh, with tremendous efficiency, to parts of Somalia affected by famine.

I suppose it is a matter of priorities, or, should I say, of money.

At the very least, perhaps the local authorities and the international aid agencies could learn something from the people of Awaday about how to deliver fresh supplies, perhaps of food and other essential items, to difficult and dangerous areas. (Source: BBC)