Fadila Bargicho believes divine intervention saved the life of one of his two sons when a landfill site collapsed near Addis Ababa. The reality is more prosaic


William Davison in Addis Ababa
It was only a misplaced shoe that prevented Fadila Bargicho from losing a second child when an avalanche of rubbish crushed makeshift houses, killing at least 113 people in Addis Ababa earlier this month.

An impatient Ayider Habesha, nine, had left his older brother searching for his footwear. He headed to religious lessons in a hut next to the towering dump. Ayider was buried alive with his six classmates and teacher when a chunk of the open landfill gave way on the evening of 11 March. His body was recovered two days later. 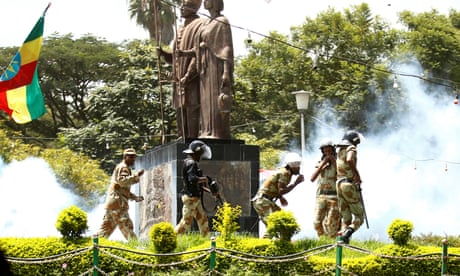 ‘It’s life and death’: how the growth of Addis Ababa has sparked ethnic tensions

“He could not find his shoe and that was God’s way of saving one of my children,” Bargicho says of her 16-year-old son, Abdurahim, who usually attended the classes with his brother.

While Bargicho sees divine intervention at play in the incident, the collapse at Reppi landfill was an avoidable, manmade disaster.

In 2013, the French development agency (AFD) gave Addis Ababa’s government 20 million euros (£17.3m) to close and rehabilitate Reppi and build a new landfill site at Sendafa, about 25 miles outside the capital in Oromia state.

Oromia has been engulfed by violence since November 2015. The unrest has been fuelled by concerns over a masterplan to integrate the development of Addis Ababa – a metropolis of about 5 million people – with surrounding Oromo areas. While federal officials insist the blueprint would mean harmonious progress, activists cast it as another land grab that would mean the eviction of thousands more Oromo farmers as the capital expands.

The AFD funding also covers retraining for the hundreds of people who picked through the waste at Reppi for valuable items, some of whom died in the landslide.

When Reppi was established in the 1960s, it was in the countryside. Now it is surrounded by shops and houses, which have encroached on an expanding rubbish mountain.

Rubbish started being sent to Sendafa, rather than Reppi, in January last year. But operations were suspended seven months later after protests by local farmers, who said the Sendafa site was poisoning water and killing livestock. 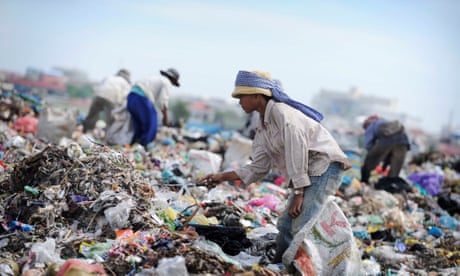 ‘Hell on earth’: the great urban scandal of family life lived on a rubbish dump

The trucks returned to Reppi, where rubbish had been dumped without being treated, compacted or otherwise managed for half a century. Authorities knew Reppi was unstable and over capacity when they resumed operations, according to Nega Fantahun, the head of the city government’s solid waste recycling and disposal project office, the responsible agency.

“One cause is the return to Reppi. It’s not the only reason, but it’s one cause, one reason, it aggravates it,” he says of the landslide.

The government hasn’t given up on Sendafa, a joint initiative of the city and Oromia region. But activity at the fenced-off site is limited to work on buildings and other infrastructure. Black sheeting covers a shallow bulge of rubbish to try to reduce the smell. An eight-metre high net was constructed to prevent waste blowing on to adjacent farmland but, when a gust of wind arrives, several plastic scraps soar into the air and tumble over the fence into the fields.

In rolling farmland next to the landfill, local opposition to the project is fierce. Gemechu Tefera, 40, a farmer, says maggots from the landfill have ruined food, cattle have died from toxic water, and a dog brought a human hand back from the site. Consultation was so inadequate that residents thought the site would become an airport, the group claims. “If they come again they will have to go through us. We will continue protesting. They will have to kill us first,” says Tefera.

The French financing included Sendafa’s construction and the closure of 19 hectares (about 47 acres) of Reppi’s 36 hectares between 2011 and 2013. Eventually, the plan is to transform the toxic site into a park. Seven hectares have been set aside for a separately funded $120m (£96m) waste-to energy plantowned by the state electricity company, which could deal with 75% of the city’s rubbish when it becomes operational later this year.

The AFD is waiting for notification from the city government to begin rehabilitating the remaining section of Reppi. That will only begin once the site is no longer being used for dumping, says Shayan Kassim, project manager at the French agency’s Addis Ababa regional office.

According to Kassim, consultants reported that the performance at Sendafa of the city’s contractor, Vinci Construction Grands Projets, was satisfactory and there were no irregularities in dealing with the impact on the community. Vinci worked with AFD and the authorities on improving Sendafa for a year after completion, and the government is undertaking more work following storms that caused some leakage into the nearby environment, he says. 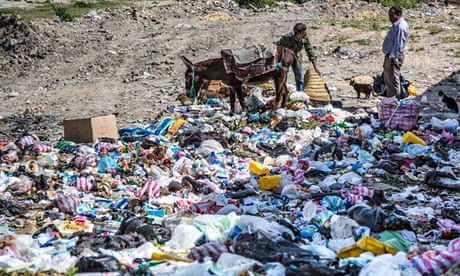 “We know the municipality has had some problems with the landfill during the rainy season and we hope the additional works will correct them.”

The local administration responsible for the new landfill’s location supports the farmers’ pollution claims. Shimallis Abbabaa Jimaa took over as head of Bereke district government last year after the protests. He produced an October 2016 report from Oromia’s government that concluded water in a local well was not potable and the cause could be a river polluted by seepage from Sendafa. The area had been earmarked by the region as a productive cropping area and should not have been selected for waste disposal, says Jimaa.

The promised improvements could mean local acceptance of Sendafa but, given the strength of the resistance, that seems unlikely, he says. “No one agreed with the project so they rose in revolt.”