ENTOTO, Ethiopia—Cast out from her family, Tigist arrived at Ethiopia’s Entoto Mountain believing that a spring here welled with holy water that would rid her body of HIV.

The journey of Tigist and Melaku is emblematic of a shift in Ethiopia, where about 1.2 million people live with HIV/AIDS, among the most of any country. The country’s traditional and often superstitious views toward AIDS commonly lead to exile for the disease’s sufferers. But modern methods are gaining more purchase, in recent years resulting in a greater number of Ethiopians on antiretroviral therapy and a decline in AIDS-related deaths.

In the 1990s, as the AIDS epidemic swept through sub-Saharan Africa, fear of disease coupled with misconceptions about how AIDS spreads fostered discrimination against HIV-positive people. Grappling with a surge in ailing parishioners, many priests goaded sufferers to seek refuge and cure at places like Entoto, which soars north of the capital, Addis Ababa.

Many Christian Orthodox Ethiopians, who represent the largest religious group, believe in the power of holy water. Ethiopian church writings say Entoto’s has the power to exorcise demons. 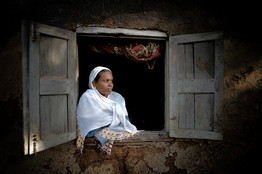 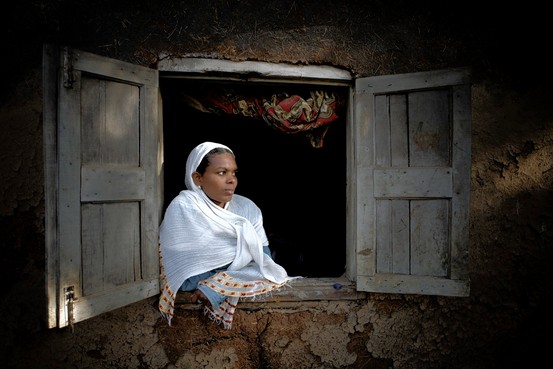 It was five years ago when Melaku, a short, slight man now 30 years old, learned he was HIV positive. Telling his family only that he was moving close to the country’s capital to find work, he hasn’t returned since.

“Only God will never hate me because of this virus,” Melaku said, sipping black coffee and pecking at popcorn in the one-room shack he rents with Tigist.

At dawn each day, he descended a steep ravine and lined up naked at a natural pool. Priests clutching crosses would pour water six times over the people, who usually also drink about a gallon of the water each day as a tonic.

Melaku remembers many people dying in his first few years on the mountain. “I tried to have faith in the holy water,” he says.

He met Tigist, now 26, whose family had sent her to Entoto after she visited a clinic and learned she was HIV-positive. At the mountain, she joined the people walking a mile to reach the pool each morning. She became more ill, vomiting the holy water.

About four years ago, when Melaku brought her to a hospital, a nurse told Tigist she needed to take drugs regularly to regain her strength. She initially declined.

With Melaku’s encouragement, she augmented the holy water with antiretroviral therapy, a combination of drugs that suppress the HIV and impede the disease from progressing.

Feeling stronger, the couple said their vows in a small ceremony.

That marked one of the victories in a global anti-AIDS push of free drugs, educational campaigns and clinics. In 2003, then-U.S. President George W. Bush poured billions of dollars into getting antiretroviral drugs to millions of Africans.

By February 2007, Johns Hopkins University had started supporting an HIV clinic at a hospital near Entoto. As the clinic integrated antiretrovirals into the holy water treatment, residents began to accept the pills, said Meg Doherty, a Johns Hopkins infectious-disease specialist who worked in Ethiopia from 2005 to 2010.

But the Ethiopian church’s stance on medication remained unclear, and many patients cited Entoto priests’ warnings that to take drugs was to spurn God.

But by mid-2007, the archbishop of the Ethiopian Orthodox Church climbed the mountain and called for the concurrent use of medicine and holy water to fight HIV. Next to the patriarch stood then-U.S. Ambassador Donald Yamamoto, who declared that religion and science could complement each other in Ethiopia. Tigist started her antiretroviral therapy at around the same time.

By February 2010, the latest statistics available, nearly 250,000 Ethiopians had started antiretroviral therapy, according to the country’s health ministry, up from about 72,000 in February 2007. The total number of AIDS-related deaths in the country of 90 million people was about 28,100 in 2010, based on government estimates, down from 71,900 three years earlier.

Sitting on a rickety wooden cot in his mud-cake shack, a priest named Woidesenbet, who has been at Entoto for nine years, says many ill individuals have been cured by the water he splashes on them. But since receiving training from government health officials, “I encourage people to get baptized and to take their medicine each day,” he says.

As women like Tigist became healthier, a nonprofit group, Beza Entoto Outreach, began recruiting them for training in income-generating activities. Tigist is now among 114 women who design necklaces and earrings that are sold locally and overseas. “She’s one of our hardest workers,” says Birutawit Tagesse, a co-founder of the Beza jewelry program.

Melaku, though HIV-positive, doesn’t take retrovirals. His CD-4 count—cells key to maintaining his immunity—remain at a healthy level.

He and Tigist live in an enclave of seven shacks that share a courtyard and a wooden gate attached to a crude-wood fence. They avoid relieving themselves at night, citing hyenas in the forest. They say rent in Entoto is a fraction of what it would cost in the city, where Melaku has a job as a guard at an office building.

Neither has been to the holy waters in two years.

“I still believe in the powers of the water,” says Tigist. Holding up two bottles of antiretrovirals, she adds: “But because this is helping me, I feel it’s more powerful.”

Write to Miriam Jordan at miriam.jordan@wsj.com