The West (US and EU) is furious at the Chinese government’s contribution to Ethiopia’s development and growing friendship and is getting cantankerous and want to  take it out on PM Abiy .

Unhinged about the Chinese penetration in Africa and more so in Ethiopia,  the current unease of US state department officials expressed by anti Abiy’s government language,  political war and distortion has puzzled Ethiopians  and friends of  Ethiopia. 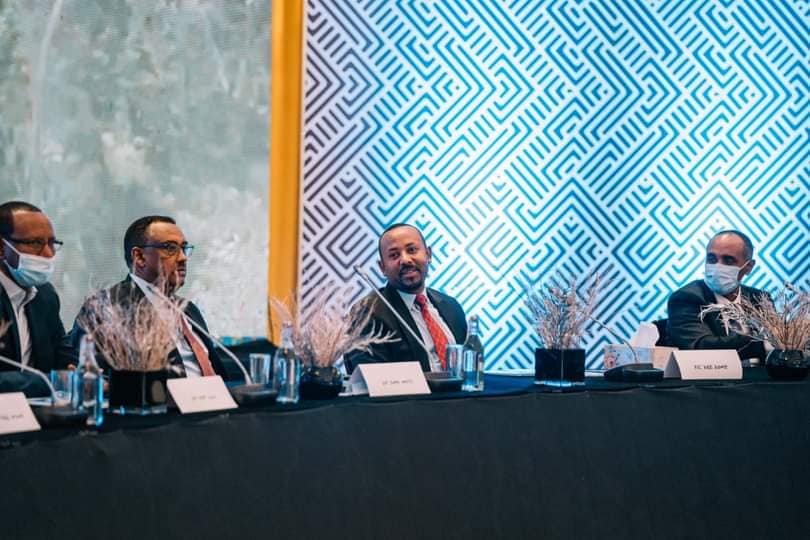 The recent US Department of State  statements/policy plans on  the current situation in Ethiopia declares “The United States has deepening concerns about the ongoing crisis in Ethiopia’s Tigray region as well as other threats to the sovereignty, national unity, and territorial integrity of Ethiopia.”  Over the past thirty years,  US policy contribution towards supporting Meles’s TPLF/EPRDF regime in Ethiopia at the expense of all democratic demands by the Ethiopian people is the reason for the  significant  present day debacle/crises in the country.

Besides being the financier and suitor, successive US administration policies  supported and armed PM Mele’s TPLF/EPRDF regime to enhance   “war on terrorism” in Somalia. PM Meles  opened war on Somalia’s shabab and also used the weapons and training to  punish internal dissent.

The Ethio-Eritrea war of 1998-2000 which was mocked by some of the US media outlets as “two bald men fighting over a comb” is too recent to forget. The war cost a hundred thousand lives. Throughout these years, US administrations supported PM Meles’  repressive  rule that suffocated Ethiopians  democratic demands.

During this period,  all we heard from the western  media airwaves was adulation of  the TPLF’s regime with  “fastest growing economy”, never putting pressure on PM Meles’  for more democracy in the country and turning  a blind eye on his bloody dictatorship and the  ‘no war no peace’ situation with Eritrea.

Also, PM Abiy does’n t have a friend  in the likes of Ruben, Alex de Waal, Martin Plaut,  Cohen etc., and the sharp shooting TPLF lobbyists in DC who are on board with US State department policy that “PM Abiy Ahmed has condemned Ethiopia to dissolution” and “PM Abiy may have cemented his legacy not as a Nobel Peace Laureate, but rather as the man who ended a country whose history dates back millennia”.

Some in these group with a perfunctory  knowledge of Ethiopia’s  history or more recent  struggles of its people for modernity,  democracy and development over the past few decades, would realize Ethiopians are resilient people and  every generation  asserts its own imagination about the nation’s destiny. As Ethiopia looks  forward to national elections now rescheduled for June 21, the group’s doomsday babble  about PM Abiy’s legacy rings hollow.

I can’t be sure , but assume learned  men like those in the group   understand that the TPLF/EPRDF lost power by rebellion of Ethiopians from all corners of the country tired of its twenty- seven years of corrupt, repressive and cruel reign.

They  would also know  the mass movement that began 2016 culminated in TPLF’s overthrow despite US support throughtout its reign. Those in the  coalition of the EPRDF  tailgated the mass movement, and except for  the TPLF,  the remaining ones in the EPRDF’s coalition coopted  the popular mass movement  that eventually brought  PM Abiy to power.

Read Aloud:   Ethiopia’s May 2005 elections, It was not your normal election

Disturbed by its predicament, the TPLF settled in its regional state capital Mekele, used it  as home base  to attack PM Abiy’s government directly and indirectly for three years (i.e., since PM Abiy’s  ascent to power).

Voices in the group  claim that  “Abiy’s stated reason for his assault on Tigray was the rebuff of that province’s leaders to his efforts to delay elections.”. This is not the reason for the “assault” and

in fact, the main reason given by PM Abiy was to enforce the law through   “a law and order campaign” after TPLF’s attack on the  ENDF northern command. The group  should ease off  with these kinds of false narratives and they  should know Ethiopians are aware of the ongoing chorus of paid intellectuals and lobbyists crowding the airwaves  pushing with “strong language” to undermine the peaceful efforts of PM Abiy.

Ethiopians know numerous efforts  in  settling  differences peacefully by PM Abiy were  rejected and many calls for dialogue by efforts of Ethiopia’s respected elders, representatives of different religious  faith  were also thwarted by the TPLF  leaders.

No Ethiopian missed the tears of PM Abiy’s  peace minister pleading  for peaceful settlement while in fact, the TPLF  was preparing for war and  believed it will march  into  Addis in a couple of weeks after its attack on the northern ENDF.

On May 26 , 2021 Senator Jim Inhofe (Oklahoma) , as if to remind  the US State Department officials spoke on the senate floor saying that the Ethiopian government wants a peaceful  resolution to the problem. He also said to equate the TPLF  terrorist group in Tigray with the Ethiopian government is wrong and outrageous. Furthermore he said “I oppose the heavy handed visa restrictions from the Biden Administration. Ethiopia needs our support as they work to end the sectarian violence. Actions like this don’t help us get closer to a peaceful resolution”.

The US State Department official’s stated “Despite significant diplomatic engagement, the parties to the conflict in Tigray have taken no meaningful steps to end hostilities or pursue a peaceful resolution of the political crisis”.

This kind of hostile pressure on PM Abiy knowing the utter destruction of the TPLF leadership and rejection of the remaining  terrorist cadres roaming the woods along with  those who committed henious crimes in prison is unfair to  PM Abiy’s government. It  may turn out to be counter productive and as Ethiopia nears its historic national elections, we may see peaceful demonstrations across the Ethiopian

nation on this matter..

Stand for Ethiopia against Western Aggression