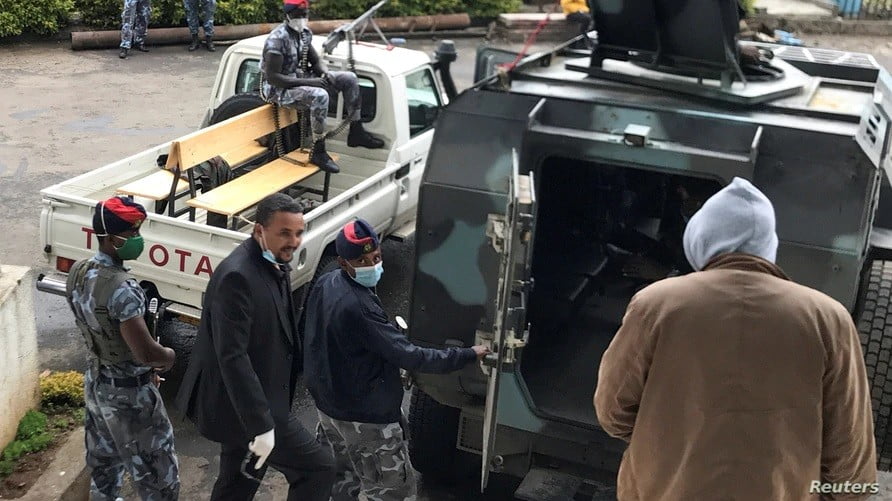 On 21 September, federal prosecutors charged opposition Oromo Federalist Congress leader Jawar Mohammed, Bekele Gerba, and 22 0thers with crimes including training a terrorist group in Egypt with the intention of toppling the government by force, attacking Amhara people and Orthodox Christian Church officials, as well as killing a police officer in the aftermath of the 29 June killing of singer Hachalu Hundessa.

Ten separate sets of charges are brought at the Federal High Court against the defendants under the Criminal Code, anti-terrorism, firearms, and telecoms proclamations.

The charges state that since September 2019, Jawar recruited, organized, and trained youth groups from Oromia region in order to overthrow the government by armed struggle. On the night of Hachalu’s killing, he used Oromia Media Network (OMN), which prosecutors say he not only used to run but still indirectly controls, to accuse ethnic Amhara of the assassination and orchestrated a campaign of incitement to violence by journalists and other individuals against Amhara and Orthodox Christians.

The codefendants include OMN employees, as well as former diplomat Birhanemeskel Abebe Segni and academic-activist Tsegaye Regassa Ararssa, both of whom live abroad. Dejene Gutema, an OMN editor, is also being tried in absentia.

Prosecutors allege that, in contravention of a 2020 anti-terrorism law, in September 2019 Jawar recruited six former Oromo Liberation Front members with combat training and sent them to Egypt in order for them to train others. In April, the suspect is accused of recruiting more than 200 people from multiple Oromia districts, and from Agew and Qimant in Amhara, and sending them to Egypt to terrorist camps in preparation for an armed rebellion against the Ethiopian government.

The charges say that on 24 June, Jawar summoned 15 youths whom he enlisted from Harar city and the Arsi area of Oromia at the Oromo Federalist Congress (OFC) office around Mexico in Addis Ababa and told them “Members of Mahibre Kidusan [a sub-branch of the Orthodox Church] are Oromo killer, neftegnas [meaning musketeers, often from the north, during the imperial era]. They will be obstacles for our fight and we need to eradicate them” and gave order for the simultaneous assassination of five priests and two other church officials. The defendant is also said to have formed an unknown number of groups, each with 10 members, with the aim of assassinating several individuals.

In his comments to the court posted on the Oromo Cause website, Jawar said: “I’m proud to be charged as terrorist for standing for justice and equality. The goal of the charge is to eliminate opposition figures and political parties in order to win the election. They did this because they saw the support and influence we have from millions of people around the country. They have lost hope and know that they will not get a single vote from humans, nor rats for that matter.”

Responding to a question at a press conference yesterday regarding Jawar’s claim of politically motivated charges, Federal Attorney General Gedion Timothewos said: “There were hundreds of people who have been directly affected by the violence these individuals have instigated and incited. We have to distinguish between lawful political mobilization and the kind of rhetoric, the kind of ultranationalist militant violent political activism that results in death and injuries of citizens.”

Gedion added: “There might be a correlation between their political activity and the crimes they have committed, but we have to distinguish between causation and correlation. Some of the suspects, some of the accused, are politicians, but they not being charged for their political activity, they are being charge for their acts, their conduct, that has resulted in the deaths of hundreds of citizens.”

According to the first charge, on the morning of 30 June, the day after Hachalu’s killing, Jawar gathered in Gulele Sub-City around St. Paul’s Hospital 30 leaders of groups he had previously organized and ordered the immediate demolition of the Menelik II statue in Piazza, attacks on Amhara individuals, and, finally, to go to Arat Kilo and unseat the government.

On the same day the defendant went to Burayu City in Oromia, and, along with Bekele and 16 other defendants, organized youth groups in the area and orchestrated attacks against police officers, while his guards opened fire, damaging the city administration building.

Afterwards the defendants took Hachalu’s body to Prosperity Party’s Oromia branch headquarters next to Meskel Square and while forcefully entering the compound killed one Oromia Special Police and injured three others, the charges read.

Bekele allegedly told his followers around Sebeta and Hageremariam town (the latter is known as Bule Hora in the Oromo language, which is the working language of Oromia region’s government) on 29 April, that “The neftenga system is strengthening, sacrifices need to be paid. Prepare for a fight.”

Bekele said in response: “They said ‘I told neftengas will not govern us’. I’ll say it here too: neftengas will not govern us. We will continue to fight for equality. The government saw the acceptance we have among the people so they pressed baseless charges and used their hired media to defame all of us defendants to make us appear as evil-doers. Many Oromo have been sacrificed in this very hall, now it’s our turn. I hope it will cease by our blood.”

Following the artist’s assassination, Bekele ordered the fifth defendant Dejene Tafa to organize youth around Burayu and ensure Hachalu’s body did not go past the checkpoint near Burayu.

Bekele went to Burayu along with the above-mentioned defendants and forcefully took the body to Addis Ababa. In addition, the defendant made a phone call to an unknown individual in Shashemene in Oromia and told them that soldiers have circled him and Jawar to arrest them and ordered Qeerroos to therefore pressurize the government.

As per the charge, the first nine of the 15 defendants and those listed from 16 to 24 were directly involved in the hijacking of the artist’s body from Burayu and the subsequent fatality and injuries of Oromia Special Police at the Prosperity Party office.

Defendants 10 to 12 are OMN itself and two of its editors, Dejene Gutema, who isn’t currently under custody, and Melese Deribssa. The charge states at the night of the artist’s assassination the editors invited guests who said in a live broadcast that “The assassination is carried out by ‘neftenga’ and we need to kill their icons as retaliation. Raise up arms and avenge Hachalu, we ought to show the Amhara people piles of bodies.” They said “Prime Minister Abiy Ahmed is resurrecting the ‘neftenga’ system and he is the one who had Hacchalu killed.”

The fourteenth defendant, Birhanemeskel, who resides in Seattle, U.S., accused Amhara on OMN of killing the artist and called on Oromo in Ethiopia and abroad to pay all necessary sacrifices including their lives to abolish the prevailing neftenga system.

The fifteenth defendant, Australia-based academic Tsegaye, said on social media on 30 June that “today isn’t a day of mourning. It’s a day of decision—now is the time when the people remove Abiy and his ministers.” Also, the following day, the suspect appeared on Kush Media Network’s You Tube channel and said “Dismantle all government institutions. All leaders of Prosperity Party, including Abiy, are enemies of the Oromo people.”

The first charge relates to initiating ethnic- and religion-based conflict and violent revolution by using social and mainstream media, thereby violating Articles 32(1)(a) and (b), 35, 38 and 240(1)(a) and (b)(2) of the Criminal Code. It says that due to the clashes initiated by the first 15 defendants, 13 fatalities and property worth more than 48 million birr were damaged in Addis Ababa, and another 167 fatalities, 360 injuries and property worth more than four billion birr was damaged in Oromia.

The second charge against defendants 16-24 is for violating Articles 32(1)(a), 35, 38 and 240(3) of the Criminal Code. It says the defendants participated in the action of the defendants under the first charge to initiate ethnic war before and after the 30 June. While the sixteenth defendant was armed with a handgun, the rest carried Kalashnikov rifles, which they used to open fire on police officers in Burayu. They also participated in attacking Oromia Special Police.

Under the third charge, which includes the training of rebels in Egypt, Jawar is accused of planning to advance his political agenda by terrorizing the population and pressuring the government, violating Article 6(2) of the 2020 Prevention and Suppression of Terrorism Crimes Proclamation.

Under the fourth charge, Jawar is accused of violating Article 32(1)(a) of the Criminal Code and Article 9(1)(a) of the 2012 Telecom Fraud Offence Proclamation. The suspect allegedly imported and installed at his residence electronic items which need authorization from the Ethiopian Communication Authority. The items are capable of creating a private network for cell phones and computers up to a range of 25 kilometers and accessing a satellite internet connection.

The fifth charge is brought against Jawar for violating Article 4(1) and 22(3) of the 2020 Firearms Administration and Control Proclamation. The charge states that police seized an unlicensed Kalashnikov and 19 bullets of a handgun his residence on 4 July.

The sixth charge on Bekele is for violating the above-mentioned articles of the firearms proclamation after two unlicensed handguns and 12 bullets were seized at his house on 2 July.

Defendants number 17 to 23 are all former Federal Police officers who became the personal security detail of Jawar.

Charge number seven, eight, and nine are instituted against defendants listed under the second charge (16-24) for violating Article 32(1)(a) of the Criminal Code and Article 4(1), 22(2 and 3) of the firearms proclamation for possessing and carrying unlicensed assault rifles and handguns.

The tenth charge regards only the tenth defendant. It states that two unlicensed handguns and 10 rounds were found by police on 30 June inside a car belonging to the suspect. However, the defendant is named as OMN, and the responsible individual might be added later.

At a hearing yesterday, the defense told the High Court that evidence gathered during investigation and recordings of witness testimonies from pre-trial hearings had not been given to them. The court gave the defense the copy of the prosecutors’ letter of request to conceal the witnesses’ identity.

The court was expected to read the charges at the hearing, but did not as two defendants, Dejene Tafa and Mestewarid Temam, had another court session. Prosecutors told the judges they want to terminate the other proceedings since the crimes are related and can be included under the charges presented at this trial.