The city of Addis Ababa is distributing more than $4 million to victims of a huge garbage landslide that killed more than 100 people on March 13.


Hundreds more were injured or otherwise affected by the disaster at the Koshe landfill on the outskirts of Ethiopia’s capital.

The city raised the money through a combination of private and government donations.

One Koshe resident, Ersemo Balbamo, lost three of his children and all of his property, but, he sounded content with his compensation.

“The city administration is fulfilling the promise they made to the public and I would like to thank them for that,” he told VOA’s Amharic service on Monday. “We are discussing what is left to do and we are presenting our situation in a report form so that we can fix what needs to be fixed. They are accepting our questions and fixing the issues we have so I don’t have any complaints.”

Another resident, Mesfin Esubalew, was less satisfied, complaining about a lack of water and electricity at a site where the government has relocated some of the survivors. 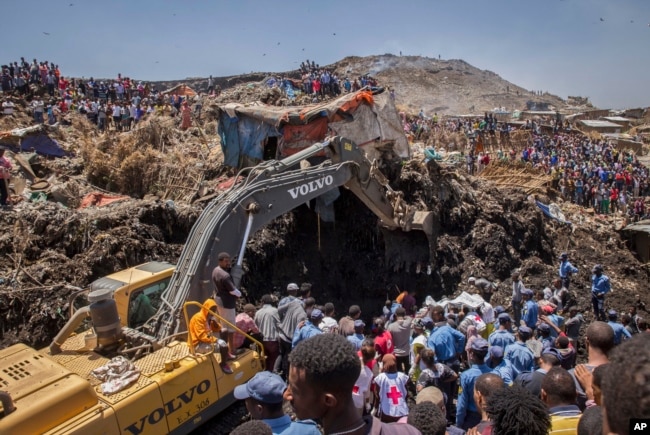 FILE – Rescuers work at the scene of a garbage landslide, on the outskirts of Addis Ababa, Ethiopia, March 12, 2017. A cause still has not been determined.

Many people live in cardboard and plastic shelters at Koshe, while others climb through the giant mounds of trash each day, looking for items they can use or sell.

Authorities have yet to determine what caused the landslide. Some of the victims complained that distribution of the donations has been hampered by unnecessary bureaucratic delays, causing the displacement of families.

The city administration put the death toll from the landslide at 115, although the victims’ families say the number was probably higher.

“There were large efforts to make sure that there aren’t bodies still buried under [the trash],” said the head of Addis Ababa’s Labor and Social Affairs Bureau, Ephrem Gizaw, on Monday.