Two British citizens and a Somali man have been jailed in Ethiopia for trying to establish an Islamic state, a radio affiliated to the government reports.


The UK Foreign Office has confirmed the detention of two British nationals.
The three men, who received terms ranging from four to seven years, were alleged to have had links with local jihadists, the Fana Broadcasting Corporation (FBC) said.
Ethiopia has extremely strict anti-terror laws. 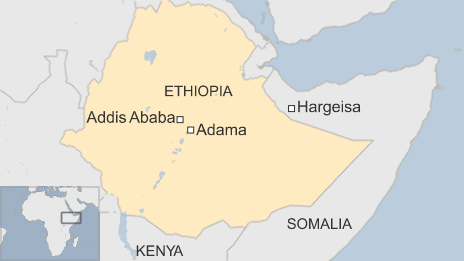 It has long waged a campaign against Islamist militancy in East Africa – and has been involved in fighting against al-Qaeda linked militants in neighbouring Somalia.
The country has also faced criticism from donors for jailing its critics, including some of the country’s leading bloggers who are facing trail on terrorism charges and have been in detention since April 2014.

According to FBC, Ali Adros Mohammad and Mohammad Sharif Ahmed had lived in London while Mohammad Ahmed was from Hargeisa in the self-declared republic of Somaliland.
The trio had been in communication with local members of a jihadist group since December 2012 and had travelled to the Ethiopian city of Adama, capital of the Oromia region, where they were conspiring to carry out terror attacks, it reported.
The Federal High Court in the capital, Addis Ababa, heard that Ali Adros had travelled to Kenya for military training and had also made a deal with a local rebel group, the Oromo Liberation Front (OLF), to carry out joint attacks, it said.

Facebook’s policing of vitriol is even more lackluster in Ethiopia, critics say